Post any small feedback not deserving of its own full-blown discussion thread in this thread. For example how you felt the timed reproduction balance is currently. 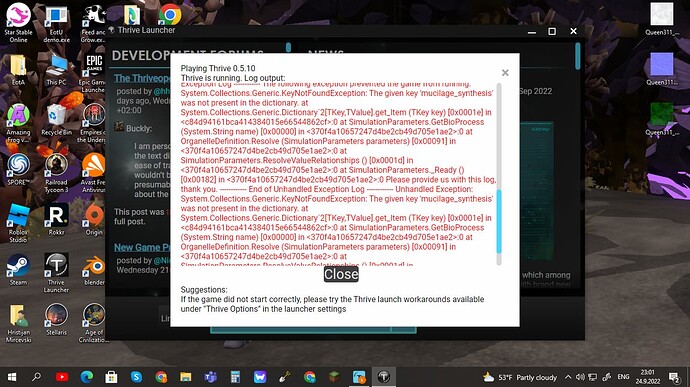 You have an incompatible mod with the new version. The given key 'mucilage_synthesis' was not present in the dictionary is a dead giveaway that you have the same problem as: Crash upon opening game (due to mods)

So remove the mod and then the game should work.

Congrats on the great new build! Some quick points:

Did you use the tiny entity limit and 250ms cloud processing interval? If not could you switch to those performance options and see what FPS you get with them?

I agree with all Rathalos says (I haven’t tested slime jet yet). I’m aware multicellular stage is still in works. But I find it difficult to progress from there, especially if I’m the predator. My cell colony slows down substantially as more cells joins by budding that I am not fast enough to capture any prey.

one word: flagellum.
lots, and lots of flagellum.

also slime jet propells you foward, so thats an option.

When I got the mucilage jets, I tested them out in front of my cell, as I thought maybe by slowing down other cells it could also be used to catch prey. It didn’t work, but perhaps his can be implemented as a sort of specialization, even if it’s later in game such as with the macroscopic sub-stage.

I like the new changes to the amonia and phosphate collection. I actually found that once or twice, the easier option was to become a stationary plant to escape tough spots of competition with other organisms, which was a pretty neat and realistic example of evolution at work. For example, at one point i was testing out the viability of being a mucilage-based ambush predator and found that over time, the requirements to achieve that playstyle required more resources wasted than extracted from captured prey, so i abandoned the predation aspect of the build and went all in on being an algae.

Another detail that came with this new update, is that the time required to grow older into ‘adulthood’ meant that the game became significantly harder. A lot of previous strategies based around finding a single large source of chemicals and using that to reproduce were no longer effective, because the time required to process them meant i had to explore more, move on from bountiful patches, and use a more consistent lifecycle for resource gain otherwise i would starve. This contributed a lot to the dominance of the photosynthesis playstyle, to the point it felt pointless to use any other food source except for photosynthesis.

One technical issue i encountered is that the organelle-based photosynthesis part was no longer tracked on the sidebar where costs of various parts is displayed. This made it tricky to design viable plant organisms because the question of whether a species would survive was based entirely on guesswork. I think there was also an issue with the mitochondria and how it was displayed, because i recall quitting out of frustration after i was unable to use these parts properly, and i think this happened twice for two different playthroughs.

One technical issue i encountered is that the organelle-based photosynthesis part was no longer tracked on the sidebar where costs of various parts is displayed.

Could you share a screenshot demonstrating the problem? I don’t think we did anything that would impact that…

you can save your multicellular progress in the 0.5.10 update

Yea, thats in the devblog lol