For the sake of my creative abilities please open this thread

for the old creature, how about Si’ovrek?
for the planet, Gevva’a,
what do you think abot these names?

I do indeed like them, do they have an actual meaning or did you just think of them off the top of your head?

i made them up, but i’ll give them meaning.
Si’ovrek is a mix between 2 words, Si’om, meaning whistler, and evrek, meaning tundra, so the name roughly translates to whistler of the tundra.
Gevva’a means land of the Gev. the Gev are the sentient lifeforms of the planet.

Meet the Hermit! Don’t really have an official bio yet, I’ll probably make it digital eventually. Uhhh. Here’s a summed up version.

The hermit is a herbivorous bipedal creature. It is best known for its habit of collecting abandoned bones, marking them, and then securing them to its head/body/whatever, hence its name. Highly timid, the Hermits best strategy is intimidation. It does this by a few methods. Feathers with eye shaped markings, large bones (collected from other animals), and tall posture.

I’m thinking of having “official names” for creatures but also kind of “street names”. For example the “Hermit” could also have an official name which I haven’t decided yet.

What do y’all think?

I’m thinking of having “official names” for creatures but also kind of “street names”. For example the “Hermit” could also have an official name which I haven’t decided yet.

so like scientific names and normal names? like how we call ourselves humans but our scientific name is homo sapiens sapiens. is that what you’re going for?

anyways, you should propably draw the Gev next, i really wanna see what they look like.

Yes that is what I mean I’m just stupid.

And I want to draw them but I still have no idea what I want them to look like. Once I finish my evolution tree it will be a lot easier and I’m already about halfway done.

(Note:
A. If no one votes then I’ll just choose myself, I just want feedback
B. Concepts 2 and 3 are a bit more rushed than concept one so please excuse that)

I like 2 as the Gev should be more similliar to the hermit, because it’s body shape seems more efficient to a sentient creature, don’t ya think?

Are you saying that an intelligent creature should be more mobile? I can easily make two more concepts to make it a fair fight if that’s preferable…

Edit: I accidentally chose I hate all of them

looks pretty good! Where is the feeding tube? all I saw was an ant-like mouth.

It’s not shaded very well and it’s also not really even a tube. It’s the thing that kind of looks like genitalia.

Update that I forgot: I’m also planning on making simplified versions of the creatures I’ve made so keep an eye out for them! 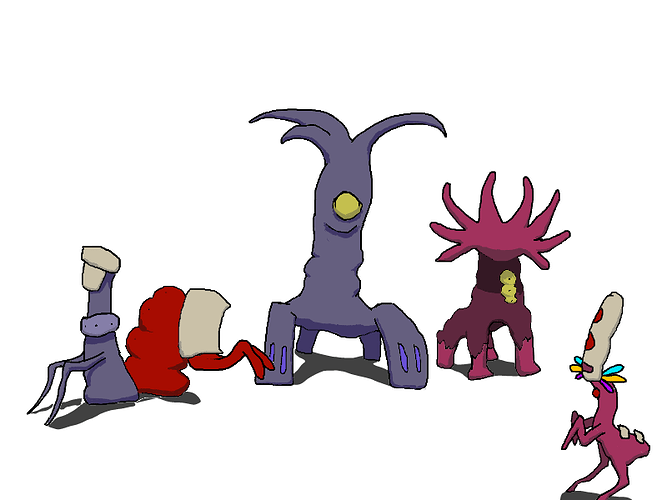 As promised! Generation 1 on Gevva’a (1 generation = 5 organisms)! I plan on keep making these creatures and keep making simplified versions every 5 organisms. Also I’m not that good in digital so some practice is good for me.

Gev concept is going a little slower than planned; I want to make a few more creatures before I do but I’m still thinking about it. Another concept is coming soon… something big…

I love it! They look like alien pokémon. So cute!

The third one looks like an Emperor Sea Strider from Expedition.

I have somewhat of a drawing, I’m not very proud of it, but once I drive home I’ll take a picture and make a summary. 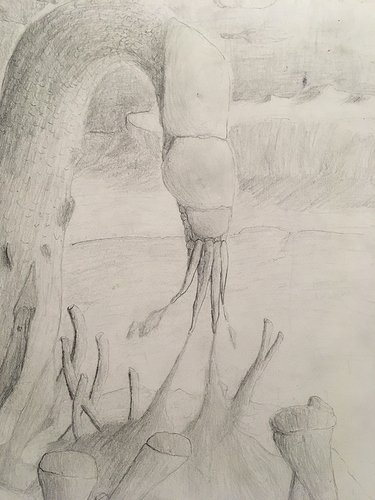 Sorry for any spelling or grammar errors. Also, because I really don’t like the picture I’m going to make another.

so how’s the new pic going?

Uh. That’s a fantastic question. To be honest I kind of stopped drawing aliens for a hot second, but I’ll start sometime this week I suppose.