Yes, sorry for that low quality post of mine. But is that true? No more cutscene?

I have recently been on holidays, and as such have been unable to make any actual progress. Until I get that elusive PC that I keep trying to get but at this rate never will, the cutscene will probably remain shelved.

I know im definitely late but what about zooms into planet, dives into water, show proteins colliding while bubble envelopes them, show the prokaryotic cell that you start with, then it begins the game.

We’re wanting to avoid revealing the overall appearance of the planet until the player sees it themself. A smooth transition into gameplay sounds pretty cool though

It has to look cinematic if we want to add realism. Maybe it doesn’t HAVE TO but it must contain some aspects that make it feel real and a more scientific game.

Progress has been slow, but I have managed to create a new underwater scene. Intended to be more photo realistic than in the previous cutscene, it worked out pretty well (considering I made it on my apple potato)! 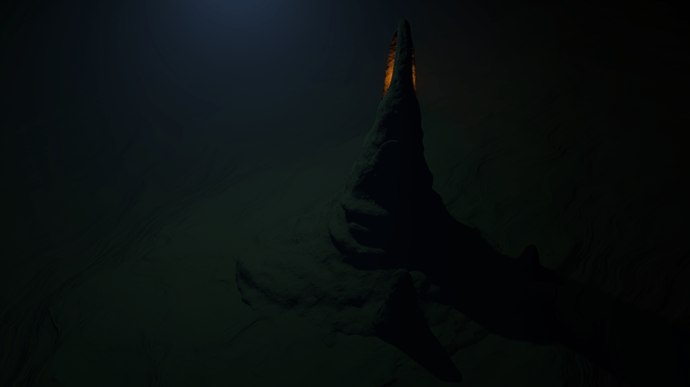 Also, from here on out, I am ditching the number system for updates. They are mostly useless.
In my next version I’ll try and add smoke for a better looking picture

(Camera zooms in and you see a creature smelting the meltal.)

That looks good! An easy way to avoid revealing the planet is to zoom in on its night side. With a splash the camera enters the primordial ocean, and moments later a small flicker appears in darkness. What is it? It’s that cool-looking hydrothermal vent you made!

I remember using this for my fanmade intro haha. Definetly looks nice, though.

I know I’m 20 days late, but late than not coming at all:P Anyway, I just want to say that this indeed looks amazing, hats off! Either way, wouldn’t it be cool if you add the Thrive logo near the hydrothermal vent, like, uh, I really don’t know how to say it in English - art in the rocks or something like this XD (That’s just a small idea of mine, but I think it would be pretty cool to add it)

3 Likes
blackjacksike (Weird FNAF cat) January 3, 2020, 6:32pm #83
I think I got some ideas of intros. Maybe the Intro could change depending upon the stage that the player is currently playing.
Also, I thought of one scene that I’ll show later, but I’ll try to describe it. It starts like so:
1. The cam is pointing at a human city (on Earth) with many people in the view.
2. The cam unzooms until we see the Earth with all the little lights (the cities).
3. Then, the cam unzooms and goes to another solar system far away with some planets including one resembling the Earth, but without life.
4. It zooms towards that planet.

5. There is no signs of life. No green, just some water and large rocky continents. And all of a sudden, some greenish things appear (plants), but there is no light. Suddenly, one point lights on. Then, two. And three. And on and on. The planet is finally lit on just like the Earth. It would be like Portal’s ending, but instead of cores lit on, it’d be cities.

EDIT: I’ll draw some comics of it later.

I think I got some ideas of intros. Maybe the Intro could change depending upon the stage that the player is currently playing.

How would that work? The microbe intro only makes sense when starting a new game as that’s the stage the player starts at. Would you want to show a cutscene when loading the game? Because there isn’t going to be cutscenes between stages. Or do you mean that the intro, that is shown before showing the main menu, should change based on like the latest save?

Earth? Is having Earth appear really a good idea?
And does that mean that the Thrive galaxy is the Milky Way galaxy?
This presents a big problem; what if the players want to (for example), destroy every life form in the galaxy? Having Earth there breaks immersion, as we know for sure that what ever happens in the game can’t have possibly happened in real life, because we’re still here. Having no Earth keeps the Thrive galaxy truly fictional, and allows the player to do anything they want without questioning its legitimacy.

blackjacksike (Weird FNAF cat) January 3, 2020, 10:43pm #87
Well I was just sayin’. But how many players would want to destroy every possible lifeform? I wonder…
By the way, Spore’s story was set in the Milky Way and it didn’t really break immersion.
But I think this current post should be moved to another thread, for it’s speaking of another subject.
QuantumCrab January 3, 2020, 11:01pm #88

In spore, Earth is hinted at, and is more of an Easter egg than something that is forced in the players face every time they open the game.

Well, I guess the Earth reference should be removed from the idea. I’ll edit later.

Rather than making the earth of 2019, it would be better when the earth just broke into many continents . That way we can stay between the sweet spot of fiction and reality.