For those of you who have been following, I’ve been working on creating an algorithm for implementing Auto-Evo in Thrive. It’s a three episode series, and I’m still only on the first episode because of how much content there is to cover. I’ve covered a lot of concepts so far and the algorithm is getting pretty complex, but I think that the actual simulation, and the patterns between evolutions and changes to the environment, are still predictable and intuitive.

To test how intuitive the model is, as well as a free chance for catching any bugs, I will be using the current algorithm to run an evolution forum game. Everyone will control their species which will be represented by a collection of stats in the algorithm. Every round I will input these into the algorithm to see how the populations change over the millennia. Every time a species evolves I will input the evolved stats into the algorithm and see how it changes the overall ecosystem. I will basically be acting as the computer when you actually play Thrive with the final implementation of Auto-Evo. Hopefully this gives a little taste of what Thrive will feel like when the Aware Stage has been fleshed out!

If you want to join, post now! If you don’t post in time, I can add you to the waitlist.

Keep in mind this is a very, very, very early play-test. Think of it as an alpha of the alpha of the alpha. It’s mostly to fix bugs, observe patterns between traits, and see how intuitive the gameplay and the provided performance statistics are. Hopefully you have fun while helping to build the algorithm.

The game will start by only accepting two players, who will take over the first two species that split off from the original species called Primum Thrivium. Every time a player’s species goes extinct, they will be put back to the bottom of the waitlist (if they wish to continue playing). Every round, a new player can join for every existing species. So if there are 3 existing species (controlled by 3 current players), then 3 new players can join in the next round and increase it to 6 species.

I will likely run the game for 10-20 rounds, or until all life goes extinct, whichever comes first.

I will limit the game to one patch for now, since the algorithm currently does not have the ability to handle anything outside of the current patch. Future versions of this forum game will have more features when the algorithm is further built. Combat is currently also not in the game, and neither is autotrophy (aka being a plant and using photosynthesis or chemosynthesis). Instead, combat will be purely decided by which species is larger.

In previous forum games there were RNG mechanics to your rolls. To simulate the real Thrive experience as closely as possible, I will not include any RNG to your mutations. Instead, you will have a budget of 100MP (just as in game) and be able to spend that to evolve as you want. You can spend all 100MP on changing one trait, or divide it over changing multiple traits.

Notice that some traits cannot actually be directly changed themselves. These are the ones that are greyed out. Instead, these are derived traits, and will only change as a result of changes to other traits.

That’s it for the rules! The below post will contain the introduction, the 0th round, and details on the starting conditions. Once we have at least two players signed up I’ll post the first round.

After billions of years of dramatic physical and chemical changes to the planet, including intense meteor swarms and severe volcanism, conditions on the planet Artemis V finally calmed to the point that life could emerge. And emerge it did, for microbial life began soon after and dominated the planet for several billion years more. But now a new age is starting, the age of multicellularity.

A species of microbes has evolved the ability to coagulate into a bind into a single colony and work in unison. This primitive multicellular species, Primum Thrivium, is the first of its kind on the planet. But now that its lineage has evolved, there is nothing to stop the gears of evolution from spawning a whole host of new multicellular species from this pioneer species.

Primum Thrivium is spherical in size and very small, only 1cm in radius. It is a very simple species. It survives by feeding off of free floating clouds of glucose that wash into the tidepool from the ocean. Primum Thrivium randomly swims back and forth through the tidepool, and detects the glucose using simple touch receptor cells on its skin. The receptors can sense the change in viscosity of the water when passing through a cloud of dissolved glucose, at which point Primum Thrivium absorbs the surrounding sugars. Then, once fully satiated or once all the available food is gone, Primum Thrivium will spend the remainder of its time replicating its cells until it can reproduce.

Primum Thrivium lives in a series of tidepools off the coast of one of the major continents. Their population has been relatively stable at around 100 members for the past 100,000 years, with birth rates almost always exactly matching death rates. 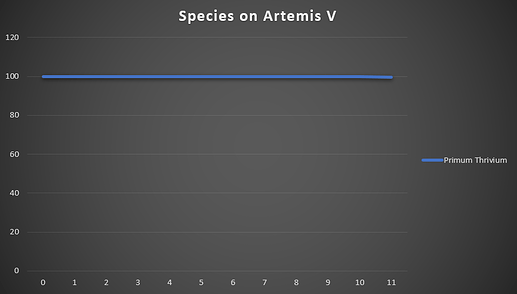 It is now up to you to control the evolution of multicellular life past Primum Thrivium and create a species that thrives and prospers!

I’ll join, anything for thrive!

A post was merged into an existing topic: THE NEW Miscellaneous Talk That Doesn’t Deserve A New Thread Thread Thread

@TeaKing You’re in! Since you posted first, your lineage will count as the direct descendants of Primum Thrivium. Just to clarify, unicellular species are not represented in the simulation (so you can’t add them as a prey). Think of the glucose clouds as representing the microbial life. Also, the Energy Yield of your muscular tissue is how much energy a predator gets when eating your muscle tissue, so it’s typically something you would want to decrease to make yourself less attractive as a target for predators. Would you like to change your MP spending?

@blackjacksike You’re in! Same as with what I said to TeaKing, the unicellular species are not represented in the simulation (so you can’t add them as a prey). Think of the glucose clouds as representing the microbial life. Would you like to change your MP spending?

@zenzonegaming @Evolution4Weak Thanks for joining! You’ve been added to the waitlist in the order that you posted.

Once all the final MP spendings are confirmed, I’ll post the first round. Also, this thread has already taught me that I should consider how to represent unicellular life in the simulation.

At the moment, the only possible prey other than the glucose clouds is TeaKing’s species, Locevin. Since I haven’t implemented combat yet, the only rule for predation is that your species must have a larger body size (body volume) than your prey. Since you are increasing your body length by 1cm this round, that makes it possible for your species to prey on his.

I only wanna survive but don’t worry, I’m not hurting anyone unless they hurt me.

action 1: expand the town. action 2: shoot down the BOS fleet. Iron wind can we be allies?

I was a BOS enemy, they hated me for being an “abomination”, so in retaliation declared war on them. now enough talking about other games and focus on this one.

I just got an idea for reproduction.
My idea is that once you have mated the female’s flesh becomes very nutritious in order to attract a predater that will eat flesh that has the eggs inside of it so that the embros grow and eat their host and then burst out like a Chestburster or a Bacterophage.

ok that clarifies everything now sorry for bringing that up.

Just going to go on my steam link and then I’ll come back on my Steam link.

you know what, let’s reduce muscle tissue metabolism for now.

Alright! All MP spendings are in and I’ll crunch the numbers in the algorithm and have the first round posted soon! If you have any last minute changes to your spending now’s your last chance.