we’ll see about that!

I know how to stop you!

me: “O holy banods, please bless and protect me from the evil people that want to destroy me, please curse those who dare try to touch me and harm me, for I am one of your most loyal followers, please protect me!”

Me: “O holy Banods ignore all prayers from @TeaKing he is a heretic and must be punished swiftly and painfully amen.”

@NickTheNick, we are pready!

@Brother_Roga It depends on my schedule, but I’ll try to keep it regular. Putting the numbers into the algorithm is actually super quick. The lengthy part is writing the posts and finding a good way to show you guys the relevant information afterwards (so you can make an informed decision for your future evolutions).

All evolutions are in, the round is coming soon!

I don’t have time to finish the entire round at once, so I’ll show you guys the results for now, and later I’ll post the detailed graphs and charts of how every species performed.

With Thrivium Convertium and Locevin diverging as the two descendant lineages of Primum Thrivium, it appeared that there was going to be a flourish of new multicellular organisms in the tidepool.

But fate proved otherwise! The new branch of Thrivium Convertium diverged into two more new species still, the Crestinium species and Zenius Zoneios. Alas, it appears that a mutation in this clade of organisms caused all three species to now seek half of their energy from glucose clouds, and half of their energy from hunting Locevin organisms. But these primitive species lacked the effectiveness of proper predators. Because these three species only had extremely close range tactile senses to find their prey, it would take them years to detect any Locevin organisms. Even when they would detect them, they would only actually notice them and start chasing them 50% of the time, because of some tactile camouflage that Locevin had evolved. As a result, since each of these three species had so few members anyways (each starting the round with only 55) most of their members died from starvation, and all three went EXTINCT!

Locevin evolved lighter muscle and connective tissues in its body, but since it was so small to begin with this only reduced its body mass from 4.3 to 4.2 grams. This made an insignificant difference in its acceleration when swimming.

Locevin also evolved a series of elastic fibers in its skin, making its exterior a lot softer to touch and thus harder to actually detect through tactile perception. This helped reduce its detection by predators (although the predators were pretty poorly optimized to begin with and likely would’ve gone extinct anyways).

Finally, Locevin’s lack of adaptations to increase its competitiveness in hunting glucose clouds made it originally very poorly adapted to grazing the clouds of sugar. It began the 100,000 years only winning 6% of hunts for glucose against the other species. However, as the other species died of starvation from not being able to detect Locevin, Locevin’s competitiveness for glucose hunting increased until it is now the sole remaining species in the tidepool and uncontested in hunting the glucose.

Thrivium Convertium, the close cousin of Locevin and one of the two direct descendant species of Primum Thrivium, has gone extinct! Over the millenia, it evolved an instinct to spend half of its time hunting seeking Locevin organisms over glucose clouds. However, while there are currently millions of glucose clouds in the tidepool, there are only 98 Locevin organisms (which are also much smaller than the glucose clouds). Even though Thrivium Convertium evolved increased strength and endurance in its muscles, as well as making its own muscles less energy yielding to other predators, these traits were not enough to overcome its inability to detect Locevin and lose members to starvation.

Crestinium was one of the two new species that branched off of Thrivium Convertium. While Convertium evolved more efficient muscles, Crestinium evolved a change to its body shape (and also slightly improved its muscles). Instead of a sphere, members of the Crestinium species gradually evolved into a hydrodynamically designed tear-drop shape. This greatly increased their speed from 14.5 cm/s to 25.1 cm/s. This made the species great at hunting glucose, but alas since it was so limited in its ability in detecting Locevin this hardly helped in that respect, and the species’ inability to find its prey ultimately led to it going extinct from starvation.

Zenius Zoneios was the other new species to diverge from Thrivium Convertium. However, while Convertium evolved more efficient muscles, Zoneios evolved an increased lifespan. Members of Zoneious gradually evolved their DNA molecules to not decay as much every time their cells would reproduce, meaning that the cells of their body would be able to reproduce for longer before reaching the natural old age death of the organism. This increase Zoneios’ lifespan from 1 to 2 months. Zoneios also evolved more efficient muscles that were able to contract and relax more often before tiring. However, these two adaptations were not enough to overcome the fact that Zoneios was painfully unadapted for detecting its prey, Locevin, thus leading to very low success rates in hunting. Eventually, starvation led to the extinction of this species.

Species History of the Planet 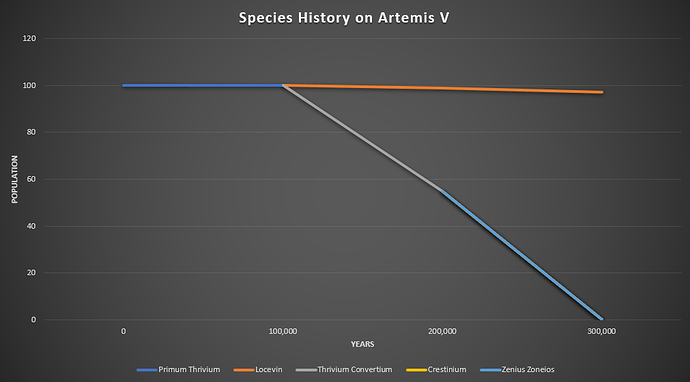 In the next post I’ll post the performance stats so you can see how each species did! Also, @Deathpacitoast and @Brother_Roga you can now join the game. Your only option is to branch off of Locevin. Choose what to name your species and how to spend your mutation points (MP). Also, feel free to wait until after I post the performance stats before choosing how to spend your MP.

To everyone who went extinct, you can rejoin the waitlist if you wish!

Oh shoot, is it too late to join the game. I love the idea of this one, i think its one of the more serious games i can handle in the forum game section (lol)

when can i join again?

you still can join, just stay in the waitlist, and next round you can start playing.

@NickTheNick everyone is ready.
also can i get back in next round?

May I join @NickTheNick?

we will all get back in next round because we are at the top of the wait list.
@NickTheNick please do the next round.

you should stop bombarding him with mentions, he will post the round when he completes writing it.

also i just relised in the last round @NickTheNick said that Lovecin was hunting the glucose.

what did i say now?!

i hope that nickthenick will do more of these with the updated algorithems.