so I heard in other threads that the editor involves more sculpting than pre-made parts, I am wondering how complex the sculpting mechanic will be?, (we can also discuss more here if y’all want to)

I want an organelle editor.
Also we don’t know for sure as this is in the seemingly distant future.
GIVE ME ORGANELLE EDITOR OR… not…

blackjacksike (Weird FNAF cat) April 24, 2019, 12:14am #3
Oh no… I was thinking of such advanced thing for my Thrive: Source project (aka The Alan Parson’s Project, lol) ! But yeah, I was thinking about an organelle editor for my own version of Thrive, but it would be for more advanced user (people with high knowledge in biology).
EEGaming (Space Potato) April 24, 2019, 1:05am #4

Wait do you mean sculpting in microbial?

yeah the multicelluar and aware stages

Technically, multicellular is split into early and late. I think the sculpting would be a lot like… that thing… the… you know… um… the… I think it starts with s… Sculptris! I think that’s what it is…

well this will be an interesting game

well in game time it will be a period of millions of years during the editor, possibly because it will take a million years to sculpt any thing lol

so aware is animals and plant, and late aware in the advent of tools?, making aware the longest part of the game

What? Where did you get aware from? I’m talking about multicellular. Aware is just one section, having a brain/ganglia. It ends when something happens, I’m writing this via email, so I don’t know the next stage. I think it’s sentient though, which starts when you have a degree of intelligence.

oh, ok, we’re both on different topics I think, idk at this point

In a nutshell (IIRC):
Microbe stage is a single cell, then once you unlock the ability for cells to bind together you reach multicellular. At this point you still have to edit the individual cells. Later on, you unlock more and more tools that make it easier (E.G. sculpting, copying parts, etc.) this is the Aware stage. Later on in Aware, you get more and more intelligent. Once you unlock the ability to use tools and the like, Awakening starts. This goes on until you are smart enough to make a tribe, which is where the Tribal stage starts, after which the Civilization stage begins (once you build a city), and after that the Industrial stage (when you invent an engine, most likely a steam one). Once you reach space, the Space stage starts.

IIRC the overlap between each stage should be pretty smooth, my personal idea would be that you could unlock new tools, but never lose them (I.E. in late aware you should still be able to modify different cells, but there would just not be any reason to unless you really want to minmax). I also don’t know how bad that will be for performance.

And also i like this idea of organism editor 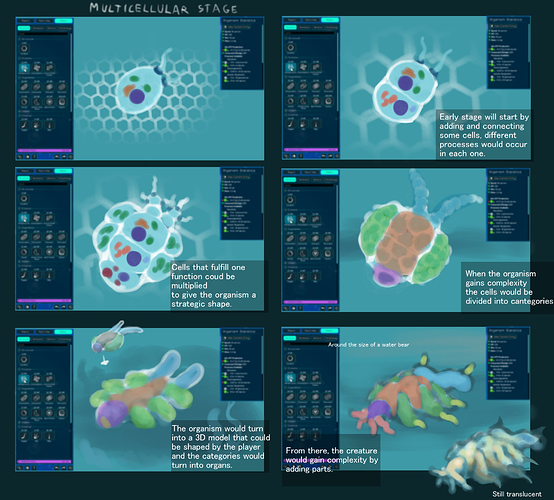 What would the scientific reason be though? While some organs might not be as useful in some areas, I can’t find a reason why some parts just can’t exist somewhere.

yeah, plus the fact that some alien life might use organs differently from how life on Earth use them

Yeah but how will it work in game?
And what if it restrict only some parts?
And what about you would randomise some parts?

for the most part you sculpt your own parts from scratch. though there will be some pre-made parts for those who don’t want to make they’re own.