Because I’ve been sort of spamming the Video Game Thread with stuff about the game I’m making I’ve decided to put this sort of stuff into its own little thread. As the title suggests I’ll mostly post screenshots of my game. Wether ‘Pretty’ is sarcastic or not remains to be seen. I have a tendency to ignore Graphics in my games and end up with horrible looking prototypes so I thought if post some stuff here I may be more motivated to actually work on that.

I do hope this is allowed even if it doesn’t have much to do with Thrive. I’ve seen other people post about similarly unrelated topics so I guess it’s okay.

As for this post: This afternoon I worked on the graphics of my game a bit. Included some post-processing kinda stuff and a texture for the water. I also fixed the low resolution coastlines @MechanicalPumpkin pointed out in the last screenshot. Here’s the result: looks good!
but the water seems weird though

That looks amazing and simple! The water does look a little weird

I’m not very happy with the water yet either. It looks decently well from afar (whence why I didn’t really notice much during normal gameplay, zoomed out camera and all that), but from this angle it just look weird. I’ll have to write a custom shader later.

So yeah turns out writing a custom shader for water isn’t as easy as it seemed. My journey this week has taken me past fragment shaders and animated normal maps, reflection probes and gaussian highlights. Never could I have imagined that something as simple as water could take so much math.
But now, one week and several failed shaders later, I think I’ve made something I’m happy with.

Enjoy this screenshot of a soldier contemplating his life decisions while looking over the new and shiny ocean. (Also notice the skybox in the background I found on the internet, and the details in the grass that appear when zoomed in.): 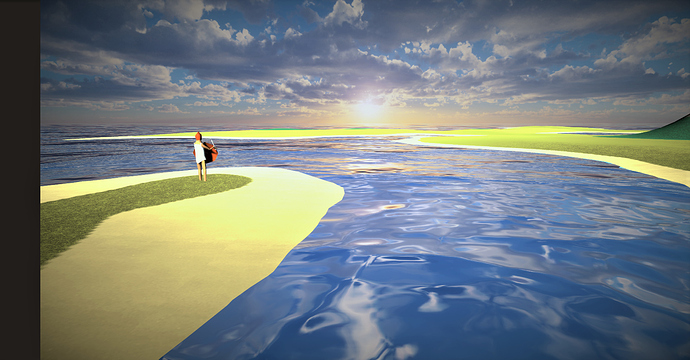 k now i wanna play your game lol
can you give me a download link pls?

it is farther up in this thread.

there are no links though
also are you sure its this thread?

If it isn’t here, then it is in the video game thread.

There’s a link to the demo version in the video game thread but that doesn’t include the new graphical improvements yet. I can make a slightly more updated build soon if you want @TeaKing.

I’m glad y’all like the new water I worked very hard on it! Actually learned HLSL just for this.

also, you learned a language just so you can make the water?
respect earned

When will you be joining as a graphics programmer? Assuming all the different shader tricks don’t melt your brain.

A long standing issue I’ve had with my game was that the player and the enemy city could sometimes spawn on seperate islands. When this happened the game basically broke because there would be no way for them to reach of fight each other.
With all of my new water I had an idea though to fix this though. The pretty water would no longer just be a decoration, let’s take the fight to the seas! 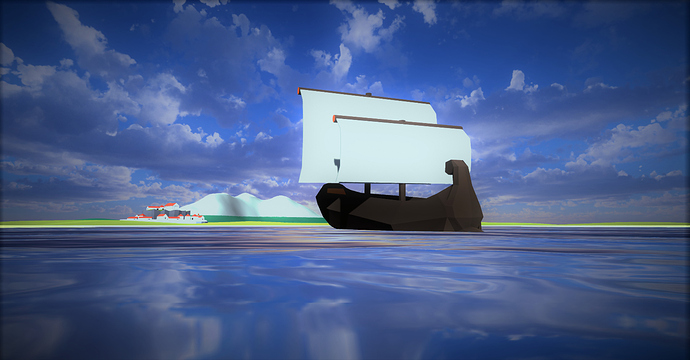 I made this model in Blender today. It’s inspired by an ancient Greek trireme, but in the same simplified ‘plastic-y’ style as the rest of the game. I even animated it!

Great! This game is taking shape. (I sadly can’t play it because my computer is messed up.)

After doing nothing but contemplate his life choices for two weeks now our soldier has finally reached a conclusion: He just needs some new toys!
Today I gave him a new choice of weapon, a spear. Spears are characteristic of Hoplites (which the soldier character is based on), and their a great defensive weapon to complement the more aggresive swords. I also finally made it so the soldier can get on the ship and be transported across the water!

At this rate I’ll probably have the next workable build within a week!

Hello my fellow gamers! Today I come to you, not with a pretty screenshot, but with a pretty game!So, @TeaKing, if you or anyone else are still interested in playing it you can do so now.
The new build features: Improved Graphics, an in game help-tab, Ships, Spears, Upgrades for your city and an AI that actually does anything (sometimes).
I know I said it would be done within a week, but I added some features I wasn’t originally planning on including. Also, it turns out programming AI’s is, like, pretty belgiuming hard. It’s probably still a bit buggy.
Despite that I’m still happy with the result and I hope you’ll enjoy playing it too!

Have you named your game yet?

Well as the title screen suggests:

You should’ve made it about sentient ants, but it still looks pretty cool! (You’ve inspired me to make an ant game)