Believe me, this module I truly do not have time. Since this study has a drop-out rate of 30-40% they decided to crank up the difficulty in this module to near the end of the study so you can see if you can ‘handle’ it, but if you take into account the fact that you have to reach your BSA by failing a maximum of 1 module the first year if you do not want to get booted, time is not something I have a lot of right now.

Totally understandable, sounds pretty hardcore that you can get kicked out of the program by failing a couple of things. We don’t have anything like that, we just have a very generous time limit (I think it’s like 2 or 3 extra years on top of the expected graduation time), in which we need to get all the courses done required for a degree.
I’d be probably almost alone in my degree programme if people were thrown out if they failed 2 things.

It only applies to the first year though, if you pass that year I actually don’t know how long you have to finish it, I know people that are in their fifth year and will likely have to do a sixth year for a study that ‘should’ take around three years.

The issue is that the study is just pretty damn difficult in general, and the system with the second module and how you have to pass at least 3 modules total in the first year (with 4 modules per year) is pretty necessary if you don’t want the 30% to drop out in their last half, so the uni decided to take this course of action. (If you have a good excuse they’re pretty lenient in giving you an extension period to reach the three, for example if you have proof of depression or exculpatory environments, like your parents going through a divorce in the first year or something.)

2 Likes
blackjacksike (Weird FNAF cat) December 17, 2019, 1:23am #3150
oof, well I just have 4 courses to make it easier for me, although I’m probably failing 2 courses this session because I haven’t been practising my exercising so much. I think there is no time limit at my college as I’ve seen people who have been there for 7 years.

Your program seems very tough, though.

I wonder if a Miscellaneous Art Thread would be a good idea, for stuff that isn’t explicitly Thrive art?
Nevertheless, I’ve done it again: 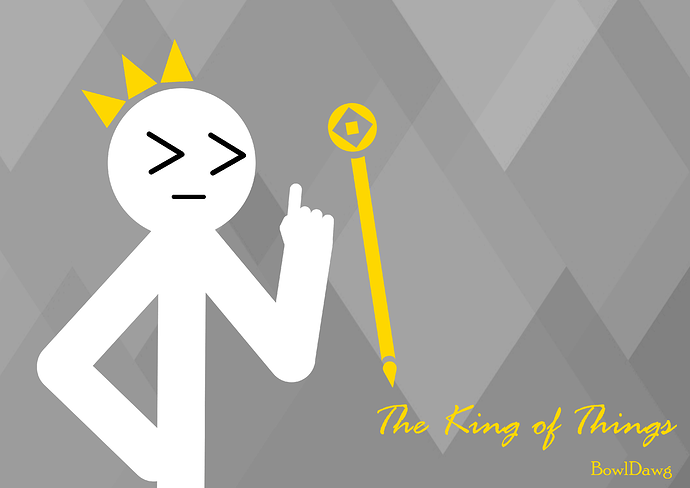 My favorite rendition of my profile picture so far. And yes, I put fingers on a stick figure, but I tried to make them as non-invasive to the eyes as I could. Like last time, I stuck with geometric shapes, and revamped the scepter. I’m really happy with how this turned out, I may even make it my new profile picture if I feel the need.

This looks really good, and a miscellaneous art thread sounds like a great idea

Wait… how many developpers are left anyway?

Revolutionary Games is a constantly changing group of online volunteers working to make Thrive a reality. Countless users have helped with discussions, assets and coding, so we unfortunately can't list them all here. Instead, we've decided on a list...

Also, I think that contacting very popular youtubers such as PewDiePie, Markiplier, jacksepticeye and others would bring many people to the community and probably more potential developers (though they would be less than forum users). The only problem I would find here is that the forum could get bloated. So we would need more mods.
We could ask them to either play the game, make memes or anything else as long as they speaking about the game.
If Thrive ever runs out of devs, I think of only one solution, though I wouldn’t like it very well. It would consist of cooperating with one video game company and that’s where things would mess up because it’s an open source project.

EDIT: I don’t think this would happen. It seems absurd.

Also, I think that contacting very popular youtubers such as PewDiePie, Markiplier, jacksepticeye and others would bring many people to the community and probably more potential developers (though they would be less than forum users). The only problem I would find here is that the forum could get bloated. So we would need more mods.

I see there being very close to zero chance for any of those youtubers playing Thrive, at least before thrive is a more known game.

If Thrive ever runs out of devs, I think of only one solution, though I wouldn’t like it very well. It would consist of cooperating with one video game company and that’s where things would mess up because it’s an open source project.

At that point all the fans would turn into idea guys trying to get a studio to make their game for them. Unless you can raise a lot of money that will not happen.

These suggestions are very, very unrealistic…

These suggestions are very, very unrealistic…

That’s what I said, right there.

EDIT: I don’t think this would happen. It seems absurd.

I see there being very close to zero chance for any of those youtubers playing Thrive, at least before thrive is a more known game.

Hum, … well I can’t answer that one. Agreed.

Conclusion: I hope the Outreach team will find enough people.

I can’t edit a thread’s title because the festive hats block the confirmation check.

There have been a lot of F’s these days.

EDIT: I can confirm I failed one course for my current session (general chemistry), with two confirmed successful courses (both Canadian languages). Only one remains. Will I pass it? Only time (and the exam) will tell…
Magic8Ball04 (Spore devs quake before me) December 19, 2019, 2:27am #3161

F’s to help me pass economics, chemistry, and geometry.

Wait, what? Economics in high school?!

Wait, what? Economics in high school?!

We had that too. Basic economics is for a large part just heavily applied maths, making the class basically just ‘math but easier’.

More Hz = more faster, and 2 smaller sticks are faster than one large one.

Ehhehhheeehh… theoretically it would work. Don’t expect to actually do a lot with it though when it comes to heavier stuff, since CPU will be very limiting.

2 smaller sticks are faster than one large one.

What I’ve heard a lot is that RAM speeds hardly matter for intel CPUs, but for recent AMD offerings they do give good performance increases. However I just looked up some benchmarks and it looks like even intel CPU owners should consider if faster ram is worth it. Some links:

What You Need to Know about RAM Speeds - Is Faster RAM Worth It?

Find out if faster, higher capacity RAM is worth it, or if it's all a fluke.

Of course you’ll want to research, as always, when selecting PC components, your actual workloads (games, video editing etc.) that you want to do on your system to see what kind of performance you can get at different price points, and then select the optimal price to performance you are willing to pay and buy the best component at that price range.

When I first joined this forum I made threads left and right, rapid fire posting, everyone else was making threads and posting, now it seems to just be a bunch of people sitting around not doing much. I ran out of things to post ¯\ _(ツ) _/¯. (Maybe I should continue my research into underwater civilizations but Omicrons kinda shot me down and I stopped after that)

Omicrons kinda shot me down

We… we did? IIRC We only gave a couple arguments against it, yet we wouldn’t call them irrefutable or anything like that.