Welcome to possibly the grandest forum game in this iteration of the Thrive Community Forum. In this series, you will face the challenges of the past, the present, and the future of humanity. Unlike Path of the Wild, which is set in both iterations of the forum but still in one general line, this game will be divided into parts, like our real history. There will be 3 main “Volumes,” each relating to prehistory, history, and posthistory. These volumes will be further divided into Acts, Acts into Chapters, Chapters into Scenes, and Scenes into Moments. All these periods are dependent on your decisions in the game; whether it’s eating some fruit or ascending beyond the game. These are the volumes:

This path won’t be easy, and I won’t help you much. Nature, being intent on simplicity, will throw everything she has to kill you from meteor impacts to cascade errors. But through cooperation and interdependence, you can succeed all the hardships of our evolution. She also limits what you can do in this game. You cannot randomly change periods, or do huge actions stuffed into tiny words (ex. I wage war and win). You need to take steps with your actions and based on previous events. When your species goes extinct, you will be reincarnated as an individual of the dominant species. Look after the children; we borrow the earth from them. Progress is inevitable, but the division isn’t. And you have until 9:00 AM Eastern time on September 7, 2019, to join the game.

That is all for the rules and layout. Now you will embark on the expansive odyssey(s) of human evolution on and outside this planet. Use your mind, voice, and senses to guide your voyages. Gain strength in numbers and advance your species. Survive the elements, teach your family, build a home. Transform the earth using your powers and knowledge passed down millions of years. Explore every biome, continent, planet, and star system. Learn the true meaning of life, the universe, and everything.

Evolution is not set in stone. It is your path to forge, and the world’s to follow.

I Join
Is There Anything Else I Need To Do?

Nope. Just wait till Saturday at 8:00 am Eastern time and i’ll be right here to start the game

Ok. Do I need a tribal name for ancestors part? If so, I’ll call my character “Abayomi”, which means “Brings great joy” (according to Babble).

I’m joining definitely. Out of curiosity how many people can join?

i would like to join but how do you play.

It’s actually surprisingly simple. Type in an action and you will attempt to make it happen. If you’re thinking of a big goal like building a pyramid, you have to take steps toward it with each round. These will be influenced by previous events, especially those caused by you (karma). In all volumes, this will be represented by the Six Values of Civs from the old forum: Strength, Reason, Pleasure, Kindness, Tradition, and Honor. These will be nonexistent when you start. In Volume I, you will play like the Path of the Wild, except aiming for both a human body and sapience. The values mentioned will increase in opacity as you understand more about the world and become crucial during Volume II. You will also advance upwards the path of Spiral Dynamics from Beige to Coral. Look at the chart below to see what I mean. 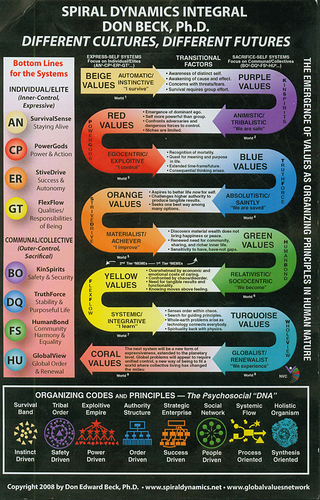 image795×1241 542 KB
You should also evolve your tech (think the Caveman to Cosmos tree) as time goes on all the way to the Singularity, which is required to achieve the Coral stage. During Volume III, you can still change your values, but technology will become infinitely influential because of the Singularity. Then it becomes your standard space 4X game with deep lore.
Trust me. When I redux this game, or make it an actual game, I’ll be more explicit.

Edit: On occasions in which I cannot host the game (School and public events) I would like @Magic8Ball04 to take over for those times. You can still play yourself, but this doesn’t mean that you have more privilege than the other players. And yes, you can do anything when it’s achievable, like name your members or make symbols to represent your civ. You should make them meaningful though.

You got it chief. If I suddenly disappear in an accident possibly related to the Michigan mafia I hand control over to… ok I am obviously picking favorites, @OmnipotentFNarr I choose you

And what if Omni is busy?

@Magic8Ball04 were you going to do me instead of @omnipotentfnarr because i was notified that you mentioned me.

I was, then @CalvinTheThriveling4 suggested that I do @OmnipotentFNarr. I really don’t think it’s that big of a deal but if you take it personally I assure you it’s not.

i don’t i was just curious.

@CalvinTheThriveling4 when exactly will the game begin?

Yeah, when does it start? It was supposed to be at 8 am.