The most important part of my post was about checking whether those .lib files were created or not.

It should work with the newer version as well just fine. I’m not going to bother updating my boost version until I absolutely have to.

See the last part of my previous post. It means that those lib files are created.

It may be that you have already managed to fix boost not being right. However due to cmake caching it is not being detected. This is why the setup instructions has a comment about just deleting the whole thrive folder and trying again if it didn’t compile the first time. You can probably avoid that by deleting thrive/ThirdParty/Leviathan/build.

1 Like
blackjacksike (Weird FNAF cat) November 19, 2019, 12:48am #23
I found out that stage/lib was empty. So I deleted boost root and its directory and downloaded v1.68.0 to see if it works. This time, the folder is filled with tons of files after compilation.

Though, at the end of compilation, it told me this.

How do I add these paths to environment variables?

Wait, do I need Thrive.sln for AngelScript too or is it only for C++ programming?

Sorry for double posting hhyyrylainen , but I got a new problem that has nothing to do with the previous one. At least, that’s what I think.
I just tested out the new dev build, and it just says “Loading GUI”. It doesn’t end, so I can’t see the game itself for the issue I want to fix (I won’t name the issue since I don’t want it to be stolen by someone else).

How do I add these paths to environment variables?

That’s the benefit of cmake, if it can find the boost installation, it will do that for you.

Wait, do I need Thrive.sln for AngelScript too or is it only for C++ programming?

You use Thrive.sln with visual studio when you need to recompile the game. Changing the scripts doesn’t need a recompile. But you need to run cmake .. in the thrive/build folder to make cmake copy the changed scripts to the right place.

I just tested out the new dev build, and it just says “Loading GUI”. It doesn’t end, so I can’t see the game itself for the issue I want to fix

That’s a bit strange, I don’t remember messing with the GUI loading since the last release. What do the log files say, especially the CEF log?

What interest me is the number of characters needed to make this post valid.

EDIT: Wait, I copied my bin folder and pasted on desktop. I played thrive on the copy. Does that change something?
hhyyrylainen November 20, 2019, 7:55am #27

Well, there’s your problem some of the data files were either missing or inaccessible. If I remember correctly that’s one of the files that Leviathan repo has as a git lfs file, so this might be the same issue you had with lfs before not downloading the files.

Does that mean I need to restart all over again?

EDIT: Found something weird in the thrive folder. 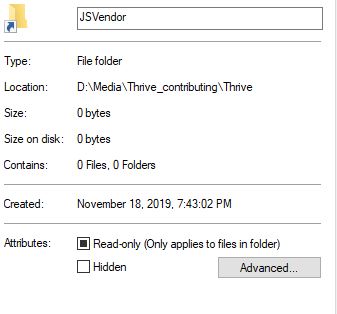 I always have had problems with drives since the first time I used an external HDD. Murphy’s laws are involved.
hhyyrylainen November 21, 2019, 6:39am #29

That “folder” is actually a symbolic link. And the error you get is the same than when you run the game. The place where the JSVendor files should be does not exist. Instead of restarting you can probably fix this by running git lfs pull in the thrive/ThirdParty/Leviathan folder.

And it doesn’t work. There’s still only the readme file.

And it doesn’t work. There’s still only the readme file.

Do you mean that git lfs does not work when you run it from command prompt? If that is the case I’d wager that you didn’t correctly install it.

EDIT: Nevermind, I copy pasted that js file from an older version of the game. Now it works. It has the new gui.

That’s going to break the next time that file gets updated. I also plan on having some more engine files in git lfs in the future, so…

I have encountered the same problem before, tried the git lfs pull command many times and it still gives me the same error. So, I assume you have the latest version of git lfs, which is 2.9.0, I’ve found that by using an older version (2.8.0 for me) somehow fixes the issue and git lfs was finally able to do its thing and download all of the necessary files.

Wow, that’s interesting. I have git lfs 2.8.0. It looks like 2.9.0 is a botched release that doesn’t work…
For example I found this post:

Hi guys, We have been having a core issue with git lfs and Azure Devops Servers (and also it's precedent Team Foundation...

I’ll update the setup instructions to say that 2.9.0 does not work.

I ran into the same issue where I was getting the error HTTP_1_1_REQUIRE. What I found was disabling HTTP/2 on the Azure DevOps server did work but was not the solution. My local client was using an outdated version of git. When I updated to version 2.23 I was no longer receiving the issue and was able to commit to LFS.

So could you guys test if updating git resolves the issue?

So could you guys test if updating git resolves the issue?

Okay fine. I guess we’ll need to re-evaluate once git lfs 2.9.1 is released which promised to add an option to disable HTTP/2 (which is likely not working correctly) to work around the issue.

Wait, but will I have to restart the compile afterwards?

No. git lfs pull in Leviathan folder should work with the correct lfs version. Then just run the setup again and it should work properly.