Here at Thrive, we’re building an evolution simulator packaged as a game.

We’re by no means the first to attempt this. In this week’s Thread of the Week, we’re looking at existing evolution simulators - both games and not - and ways they could influence Thrive.

If you want to expand on a point I make or have examples of your own, please reply to this thread. The idea of Thread of the Week is to build an engaging, in-depth discussion everyone can be a part of, and that can’t happen without your participation. 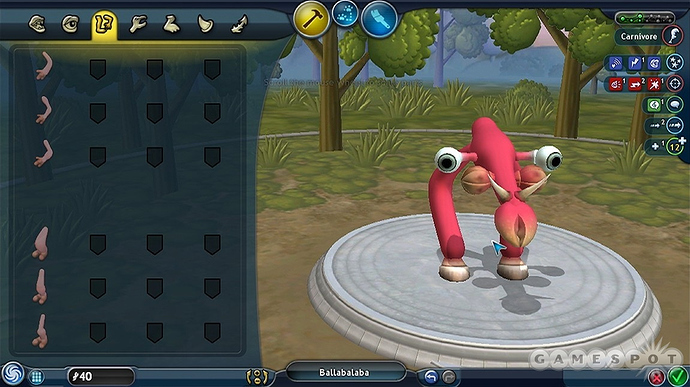 Obviously, we have to start with this one. It’s why we’re all here after all.

Based on Will Wright’s original idea for the perfect blend of procedural generation and fun gameplay, Spore…didn’t quite do that. We all know the story of schisms between different factions in the development team. One side wanted realism and depth, the other (likely supported by the marketing people) opted for a cutesy, more commercial gameplay aesthetic. Though neither side won outright, it’s clear this mode of thinking led to a product that fell short of Wright’s dream.

What about it made it fail? I’d be interested to hear your comments, but from an evolution simulation perspective, one core aspect was missing entirely: evolution.

Only the player organism ever changed. The rest of the world was stuck in a strange stasis, watching the player “evolve” plenty of weird limbs and body parts and genetalia-shaped bodies without reacting. This is why the game attracted criticism for presenting evolution like intelligent design. There’s no environmental push for changes, no competing species, not really much of any simulation to speak of (except the procedural structures of the organisms themselves, which were huge leaps forward in game design).

Hence, we arrive in the weird situation of having the poster child for evolution simulation games not actually featuring any evolution. On the simulation vs game spectrum, Spore fell very much towards the latter.

What this does give though is incredible scope for creativity. Where it failed at bearing the standard for science games, it succeeded wildly as an artistic outlet. Just look at all the mad stuff people like DarkEdgeTV churn out. It’s no wonder all the expansion packs focused on new parts and better creation tools, because the game had found its niche (yay for evolution analogies) as a creative agent, not as an evolution game.

Let’s go right to the other end of the spectrum, shall we?

Tierra isn’t a game. It’s an evolution simulation in the purest possible sense, because it involves evolution of computer programs themselves.

Back in the 90s, ecologist Thomas S. Ray built a computer architecture which allowed programs to duplicate themselves if allotted enough processor time and memory, with the possibility of imperfect code copying. It’s the most mathematically pure distillation of how evolution works: begin with one organism which reproduces with possible mutations, then watch as its descendants blossom into endless forms most beautiful.

Blossom they did, for Ray soon found the computer filled with different programs scrambling to take over its processor, just as real organisms compete for nutrition. My favourite example is the evolution of parasites - programs leaching processor time from others like, well, leeches. Ineffective programs went extinct and, by natural selection, those that remained became more ravenous and well-adapted to take over the processor. It’s astounding to me that such a simple system created a recognisable ecology.

If you were worried this could end up with sentient beings inside the computer, fear not: someone did some mathematical analysis and found an upper limit to the possible complexity of Tierra-grown creatures. So we’re safe from the robot apocalypse. For now. 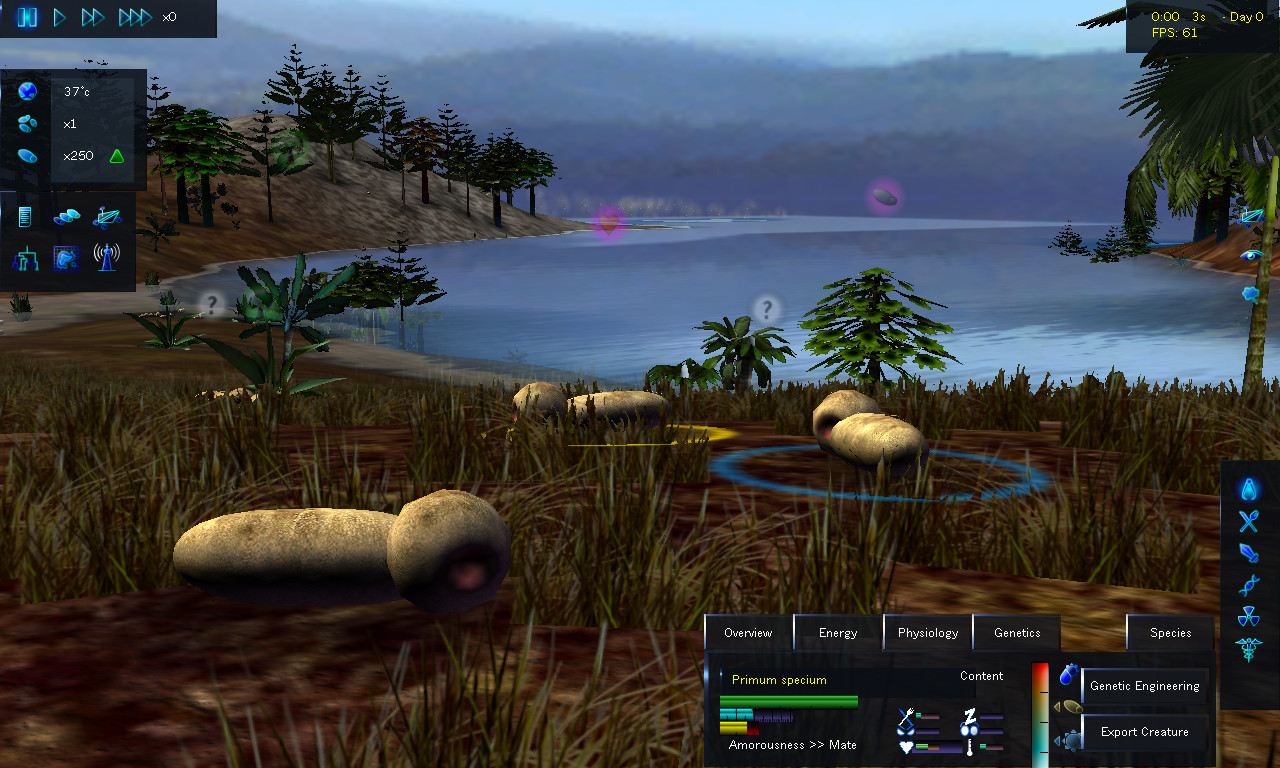 Most of you will know this one too. We had a chat with the developer a while ago about how we went about simulating evolution.

Species lies in the middle of the two simulators above. While the player doesn’t take direct control over anything, their input does have an effect on the simulation, making it far more “gamey” than Tierra. Plus, it’s got cute and horrifying blobs rather than lines of code. That always helps.

As it takes place in a relatively small arena, Species can afford to simulate proper Darwinian evolution. You start with a humble Primum Specium which, pushed by external factors, begets a whole tree of life. Species which don’t collect enough food to reproduce die out, while those that do come to dominate.

Player interaction comes from their ability to change those external factors, both explicitly and implicitly. On one hand, you can tell a rover to feed only creatures with short necks. This gives short-necked creatures an advantage and the environment as a whole tends towards looking like r/AnimalsWithoutNecks. Or you can change the climate, which does kind of the same thing but not quite so bluntly.

Thrive began many moons ago as a group of people dissatisfied with Spore’s lack of realistic evolution. Our aim is to build a game that combines the best bits of Spore with the best bits of evolution simulators.

Compare the scope for personalisation in Spore and Species ALRE. In Species, you can only ever guide a creature towards looking how you want it to. While intriguing and often hilarious, it will never have a community based on sharing creations ten years down the line like Spore does.

So, in Thrive, we’ve kept the “intelligent design” aspect in the player species. Although restricted by maximum mutation rates in each generation, you’ll design your organism yourself.

At the same time, the environment around you will work according to the hard, algorithmic laws of simulators like Tierra and Species. So your world will evolve with environmental reactions and feedback loops and all that great stuff found in real world evolution.

This then leads to what, in my opinion, should be the focus of Thrive: can you beat nature?

Can you design a creature that holds its own against the might of Darwinian evolution? Are you better at adapting to your environment than the systems that have given us the entire modern ecological world? In a world of change and competition over resources, will you thrive?

As stated above, feel free to post more examples of games and simulations with their own take on computerised evolution.

The first thing that springs to mind for me is SimSafari. I used to play it back in the day with my sister. It didn’t have inheritance with mutation but it did have popluation modelling. Sometimes the best way to get rid of rabbits was by adding foxes.

I enjoyed Carykh’s videos about his evolution simulators, they’re cool.

Also a friend of mine has long been into Biogenesis which is a pure evolution simulator, you can set the conditions and watch species rise and fall. Generally there will be waves of complexity as when complexity is low a lot of individuals propagate which makes a lot of food for complex life which evolves and then competes itself our of existence. All very interesting.

Evolution by Keiwan, a more simulator based thing than a game, but can be pretty fun to mess around with.

Basically you make your creatures skeletal and muscle structure, and send it off to try and evolve to do a certain task. Please note that the browser version can have some pretty heavy framerate drops.

I’ve never heard about this Tierra.
I really want to look it up, but I have to study. Of to the wikipedia page I go then

Another great one is Darwin pond,
http://www.ventrella.com/Darwin/darwin.html people like evolving creatures and versing them against each other in that game.

Heres a really basic one i made a while ago:


its called simple life sim. The various circles have their own genomes and can be producers or decomposers.

Another interesting one is Biosim:

Then theres framsticks, which is an OPEN SOURCE evolution sim
http://www.framsticks.com/

There’s also his evolv.io by the same guy
https://www.youtube.com/watch?v=C9tWr1WUTuI&list=PLrUdxfaFpuuK0rj55Rhc187Tn9vvxck7t&index=11
which is more of a game than the evolution simulator

These creatures were evolved with a program called 3DVCE. The main site has been down for years, but the program is probably still available for download somewhere.

There’s even one that evolved to exploit weaknesses in the physics engine:

More interesting simulations were done in 1994 on a supercomputer (and nominative determinism strikes again):

there is also ecosytem: https://ecosystem-game.com/ it simulates ocean creatures and their evolution.

Necroposting because I found a game called The Sapling, which looks like a simplified version of what the Aware stage could be.


Basically you can create plants and animals and watch them evolve in a small ecosystem, you can modify them yourself or use the random mutation button (though that is in sandbox mode.) There’s even an instinct editor for animals.
3 Likes
thunder (thunder) February 23, 2020, 5:53pm #11

https://steamcommunity.com/sharedfiles/filedetails/?id=796196124
And thing that I know that exist but here it is

Both of which are heavilly inspired by spore