something i forgot to say last month: there is a thing called a macrovirus which is a type of unicellular organism with a metabolism that has a viral envelope instead of a membrane and it has to infect a cell to reproduce in most cases

There doesn’t seem to be anything about a biological macrovirus online. Are you sure you used the right word? 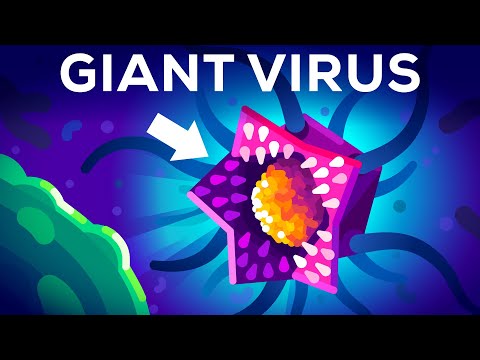 So they’re called Giruses, not macroviruses. And all that video shows is that when they infect amoebae they form an organelle that produces viruses instead of using the cell’s pre-existing systems, and that they have many more genes than other viruses. You are clearly misinterpreting what these are they are. They are not cellular. They may have a very simple metabolism when outside of a cell.

the biological definition of the cell is the smallest structural and functional unit of an organism, typically microscopic and consisting of cytoplasm and a nucleus enclosed in a membrane. Microscopic organisms typically consist of a single cell, which is either eukaryotic or prokaryotic. therefore giruses are by definition unicellular as they are by definition alive as the definition of alive is having the ability to reproduce, to respond to stimuli, to Exhibit complex organizational structure, to Have nucleic acid as their hereditary information, and Are composed of one or more cells. all viruses react to at least a few stimuli according to
Stimulus-responsive viral vectors for controlled delivery of therapeutics - PMC.
. and not all of them have no membrane as the mimivirus has a lipid barrier meaning that yes some viruses are in fact cells and alive
but girus is just the portmanteau for giant virus/macrovirus/big virus

You are leaving out two of the criteria for life; growth and energy transformation. Giruses can do neither.

But when they are in the host, they stop being viruses.

well fortunately if you really wanted to play as a ‘virus’, you could go with the brain controlling fungus rout.

if we really want viruses in gameplay, we could always have them be a hazard, like the free floating OxyToxy in current game, we might be able to implement a sort of CRISPER in the game as a sort of resistance. as far as playing as a virus goes I’d say the closest we could do to that is some sort of bacteria vs virus mode. but seeing as virus do mutate and at a fast rate, i guess for the sake of simplicity we could just register viruses as parasites, as both viruses and things like tapeworms need a host and they often specialize. it would be a loose catagory, but if parasites are playable we could just say that viruses are the tapeworm of the cell world.

yes, i used tapeworms as an exapmle as theyre well known, but manny manny manny manny parisites have clearly defined life stages.
guinea worms are another example of this, and if im correct they actually need humans in order to complete their life cycle, i might be wrong.
point is viruses could be paralellesd to just being really small parasites for the sake of gameplay

i used tapeworms because of how their life cycle works.
the egg gets excreted → the egg gets shat out by host → egg stays unhatched until it is in conditions normally only in a colon → egg hatches with enough warmth, water, and nutrients → larva grows into worm over a period of time → worm lays eggs some of which hatch in host’s body → if left untreated can kill host and eat their flesh like maggots but eventually A get eaten or B die