Seeing as not many people are sharing their experiences with the latest release. Maybe making this thread will help?

So please share your experiences with the latest release here.

I don’t know if this is a problem for anyone else but…in the biome mesopelagic compounds (Not just glucose) become VERY rare (As in, I didn’t find ANY other than a few pieces of iron here and there), and I had to restart countless times because of this.

It could be RNG, or, I evolved too complex too fast. 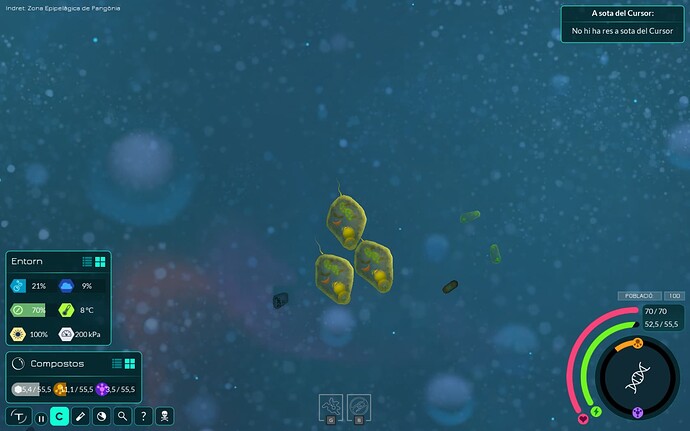 In general, the gameplay feels a bit better than in the previous version, especially when it comes to the colonies. Compounds appear to spawn more regularly and encounters with NPC’s are more frequent. Also, it seems to me that NPC’s behave a bit more intelligently and interact more with other NPC’s and the player’s cell. I would like to suggest a couple of very small tweaks that could be made:

Finally, I would like to congratulate the developers, and point out that the release has been covered, once again, at GamingOnLinux: Spore but with lots more science, Thrive has a new release out | GamingOnLinux

When starting a new game, before reproducing for the first time, it is still possible to encounter other cells, identical to the player’s one. From my point of view, this shouldn’t be the case, as the player’s cell is supposed to be the first ever living organism on the planet.

Are they at least your species? The player isn’t literally the first cell, just the first species. So you can encounter members of your species.

When the game is paused, the “At Cursor” box does not update, although I think that it used to be possible in a previous version (maybe 0.5.3). Bringing this small feature back would allow to, for instance, calmly point at other species while the game is paused to easily read their names, just out of curiosity. Now that the statistical graphs already show the population dynamics of different species, trying to identify them all while in the environment has become more interesting.

I’m pretty sure it has been that way since 0.5.0. This is because the hover panel update is tied to the microbe stage update logic, so it also pauses when the game is paused. But I suppose that yeah, it updating while the game is paused makes sense, but that’ll need a little bit of thinking from the programmer who implements that to do that cleanly, opened an issue:

Mouse hover panel should update while the game is paused

So that the player can pause the game to plan and check things with the mouse. I… think the reason why it doesn't is that it is in the main microbe stage update code, which is paused when the game is paused (I mean otherwise many of the game systems wouldn't pause). Probably needs some bit of code architecture design on how to do this sensibly.

Are they at least your species? The player isn’t literally the first cell, just the first species. So you can encounter members of your species.

Exactly, they are from my species. You’re right, in that case it makes sense.

But I suppose that yeah, it updating while the game is paused makes sense, but that’ll need a little bit of thinking from the programmer who implements that to do that cleanly, opened an issue:

Playing with colonies works much better than before! No real problems with bugs anymore. Though the fact that cells bind exactly where you impact them means I usually end up with a bunch of them in a cloud in front of my main cell, since I’m too slow to catch them going backwards. Also, I’ve found the main benefit I’m getting out of the binding agents is the ability to make an enormous vacuum cleaner for compound clouds. I think this exposes the need for slower turning player cells. (though part of the problem here is that your own cell’s centre is take as rotational axis, even if all the other cells are in a line in front of it.)

Spawning seems a bit better, and I can see some more other species in the early stages, though unfortunately later on the population levels of other species become too low to show up much. I still run into problems of swimming in one direction for over a minute without encountering anything (cells or compounds), while dying and respawning or moving to another patch seems to create a more balanced area. I really wish reproducing and staying in the same patch also reset the map like moving to another patch does.

The “duplicating organelles one by one” system, while unique and interesting, still causes weird gameplay. Especially since you can’t control which organelle is duplicated first, so your cell designed to have more than enough ATP production to always keep moving, will suddenly become incredibly annoying to control because it decided to duplicate all the flagella first. I know this isn’t a new thing, but I still wanted to mention it.

The 0.5.5 release is amazing but a few useful things are

i dont think so as in my world my species (linusium torvaldius) has branched of and there are lots of cells.
but i do agree when you become a predator cell it seems that the other cell count just dies out

and lastly an organelle which allows you to transfer resources between cells
NOTE: not sure about the realism of this but it would be cool

Forming a colony shares resources equally between all the cells in the colony.

Oh so you mean sharing resources between cells without being in a colony? I’m not sure if it would be LAWK, but I don’t think it would be impossible…

Either way, there’s probably not going to be much interest in such a feature when you can easily share resources by forming a colony, temporary or otherwise.

Kinda related but not really, could a cell full a Vacuole then release the Vacuole to another cell?

yes this is the kind of thing that I meant because currently if you bind to another cell then it usually later on ends up in just leeching you resources.