0.5.6 release (along with Steam and Itch releases) is approaching so here’s a release candidate testing build. This release includes a mod loader, which is mostly complete now and included in the RC. I made two example mods that can be downloaded and used with the mod loader (let me know if the Damage Numbers mod doesn’t work on Windows). You can grab those from Github: Release Mods v1 · Revolutionary-Games/ThriveMods · GitHub

Here are the downloads for the release candidate:

As always please report anything wrong you find gameplay wise or as crashes.

These two panels are clipping both in pt-BR and en.
Also, the Binding Agent is membrane-colored in the editor. 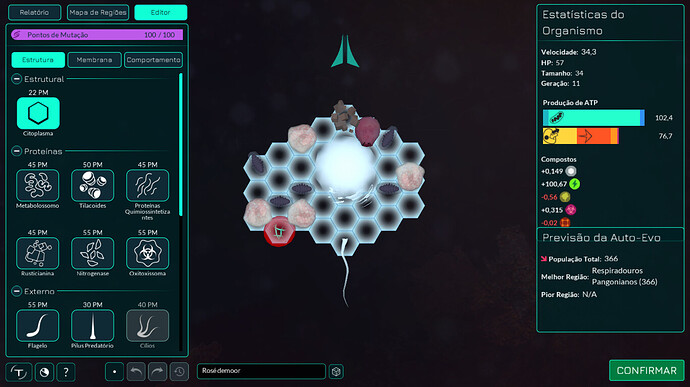 Tested for a while in Windows and found no bugs. The new features feel good and polished. Also, both mods worked perfectly

As always, I noticed small things that could be improved. For instance, the tutorial does not explain that you have to collect ammonia and phosphate, and then click the editor button to reproduce, which could confuse new players at the beginning.

As always, I noticed small things that could be improved. For instance, the tutorial does not explain that you have to collect ammonia and phosphate, and then click the editor button to reproduce, which could confuse new players at the beginning.

Did you struggle for 3 minutes? That’s how long it takes until the handholding tutorial telling you to collect ammonia and phosphates to fill in the bars takes to kick in.

That’s good news, means that C# mods work across platforms (at least when compiled on Linux they work on Windows, hopefully the reverse is also true).

Perhaps I need to adjust the time for that to appear

3 minutes can feel like forever if your lost and confused. Maybe 2 minutes would be better, or 1 and 30 seconds

I know that we should give some breathing room to new players to give them a chance to figure things out for themselves without hand holding, but we’ve also got to consider that some folks will just never connect the dots, and thus be left struggling for a while.

3 minutes can feel like forever if your lost and confused. Maybe 2 minutes would be better, or 1 and 30 seconds

Consider that the timer starts the second you start the stage. So if it takes you around minute or almost two minutes to finish the movement and glucose tutorials (due to luck it can take like a minute for the glucose tutorial to even appear). That just leaves under two minutes for the player to get to the editor before the tutorial pops up.

I think that time delay is good enough (though if we had resources we could do user testing with fresh players to see if they have so short patience that they don’t play for even 3 minutes), as the player likely hasn’t found all the compound types yet so the bars in the bottom left and also the glucose tutorial that appears very fast, should prompt the player to attempt to collect different kinds of compounds.

Also, the Binding Agent is membrane-colored in the editor.

Managed to reproduce the issue:

I love it, but the auto evo is a little to punishing, maybe turn down the punishment?

Found a crash, it just closed the game… no logs or error screen. It happened when I was exiting the builder.

Can you describe how it’s punishing? Are there too many super predators? Is there too little prey?

Did you try the RC build already?

Your earlier comment seemed to indicate that you hadn’t yet tried how challenging the new auto-evo might be.

nope, i always try and play games on max so. I’m pretty sure i didin’t.

A post was split to a new topic: 0.5.6 new binding problem

This topic was automatically closed after 8 days. New replies are no longer allowed.