About Storage and Sugars

Hello everyone! It’s ya boi Sentiant back with another convoluted concept that will never actually get implemented into the game. Let’s get started!

So, I’m sure anyone who has/had biology class in high school has seen pictures of a plant cell before. This is one: 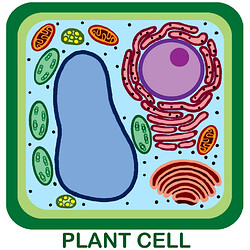 image1024×1024 226 KB
What organelles take up the most space in this cell? The nucleus, because it is an eukaryote? NO. The chloroplasts, because it is a plant? NO. Out of all things, it is the storage vacuole.

Now, IDK about you, but I have never once taken a vacuole as a plant in Thrive. So if storage is apparantly so important to plants irl, why isn’t it in Thrive?
Well, one thing that plants irl have to contend with that Thrive ones don’t is the day/night cycle. In Thrive, once a plant has enough chloroplasts to support it’s metabolism it is basically immortal, making plants very OP. It makes sense that plants would be hard to balance in this system: The hard part of being a plant isn’t to produce energy while the sun is already in the sky, it’s still being alive by the time the it rises!
Implementing some sort of day/night cycle into the game would balance out autotrophs, and make storing energy for the night realistically hard for plants to do. As for predators, I think they are fine right now. Cells can be sparse at times so storing your energy from the previous kill is already quite important.
Now that we’ve figured out how to make storage important, let’s look at how a cell can make its storage system better.

Carbohydrates
This is where the ‘Sugars’ part begins. Basically most energy in a cell irl is stored in one of three ways. These aren’t mutually exclusive by any means, organisms regularly convert them into each other:

Game mechanics
With that said, how should we implement these into the game?
In my opinion ATP is already handled quite well. But I’ve seen concepts on the dev forums about making more diverse uses for ATP (e.g. ‘sprinting’) that look cool.

Sugars could maybe use a bit more attention. Currently only one sugar is implemented into the game at all: Glucose. Glucose is a good default sugar since almost every organism uses it, but it’s a bit weird that it’s treated as the only sugar in existance. As I don’t see any game design benefit to actually defining stuff like fructose and sacharose in game terms, a solution might be to simply call the compound ‘sugar’. One small inaccuracy about sugars that frustrates me when playing the game is that some energy sources in the game actually produce sugars directly, whereas others produce ATP. This leads to a dichotomy that doesn’t exist irl; in reality energy is produced in the form of ATP and then converted to glucose if it can’t be used immediately.
In game this should be represented by having thylakoids (and anything else that produces glucose instead of ATP) generate ATP. This means simple plants don’t need metabolosomes anymore. If the player wants to have a good chance of surviving the night though, he can then add a seperate organelle that converts ATP into sugar, and metabolosomes that convert sugar back into ATP.

The third type of energy storage actually isn’t in the game right now at all. The most common larger molecules for storing energy that I know of are Starch (various kinds) and Glycogen.
Starch is mainly used by plants. I’ve seen suggestions on this forum about organelles that convert back and forth between glucose and starch but I’d prefer a simpler mechanic. We should add an organelle called an Amyloplast that stores sugar in starch form. The organelle acts as a vacuole that only stores sugar, but stores a lot of it. It is assumed that energy is converted back and forth between sugars and starch whenever needed, allowing us to avoid adding an entire new compound to the game. Of course, any cell eating a cell with starch might still have problems. They would need a lysosome to digest starch. An amyloplast would be common in plant cells but a lysosome might be the mark of a predator.
Glycogen is used by pretty much everything that isn’t a plant. I’m fairly sure that this is because it can be converted back into glucose faster; this is supported by the fact that muscles can use glycogen directly (and quickly) while starch must be digested. Glycogen might also be lighter, lending itself to a mobile lifestyle, but I can’t confirm that because google doesn’t know the density of glycogen.
There might be some challenges in differentiating starch and glycogen but I think it’s worth it.

In conclusion there are a lot of ways to store energy, and a lot of things that still need to be figured out about them. How do we differentiate between different storage molecules within a category, if at all? Are there options that I missed? Fat maybe? Let me know what you think if you made it this far into the post.
Thank you for coming to my TED Talk.

These are nice ideas. In particular, your mention of the vacuole not getting much use, and the need for a day/night cycle has caught my attention. I came to this very same conclusion myself when I was thinking of ways to balance photosynthesis. Now these days I have mostly calmed down about that after limiting light levels to 100%, but introducing variable and changing light conditions into the microbe stage could still be in the realm of possibility. I hope that it would make photosynthesis gameplay more interesting than slapping on green bits and winning. Relevant devthread

I’m not sure I would personally like to rename Glucose to simply “sugars”. I don’t have a specifically good reason why, I just like how glucose fits in with the other compounds, plus it’s popular and easy to recognize by most people. There is also the potential that we could implement other sugar varieties should we ever decide to increase game complexity by introducing complex edibility and digestion mechanics but that is a discussion for another time.

I do actually like the idea about generating ATP, and then converting the excess into glucose! I might look into that and see if it improves gameplay as I feel like it could if done right. My only real concern is it could potentially homogenize the different metabolism types. I personally try to make things as distinct as possible to keep things interesting, and part of that is producing different products so players have to work around that with their setup.

I’m not entirely sure about glycogen and starch when it comes to gameplay as it feels like “glucose level 2”, and might complicate things when it comes to balancing around two different levels of storage on top of ATP. That does not mean I am against it, mind you, I am just unsure how best to implement something like that.

After you have brought all this up; I am starting to think that a good discussion on metabolism and storage types could well be in order. If done right, it could allow for more compelling gameplay and strategic choices in Thrive, as well as to be fairly more realistic. However, it could very easily be done poorly and introduce a bit of technical learning curve that could make Thrive harder to dive into, and more of a hassle to enjoy. I really appreciate your ideas here, thank you.

I thought the reason plants had a big vacuole was so that they could keep their rigidity. If that was the case, single cells wouldn’t really need them. However your ideas do seem sensible.

I’m not sure I would personally like to rename Glucose to simply “sugars”. I don’t have a specifically good reason why, I just like how glucose fits in with the other compounds, plus it’s popular and easy to recognize by most people. There is also the potential that we could implement other sugar varieties

Yeah, now that I think about it ‘glucose’ does sound more scientific, and I like keeping the possibility of other sugars open.

I do actually like the idea about generating ATP, and then converting the excess into glucose! I might look into that and see if it improves gameplay as I feel like it could if done right. My only real concern is it could potentially homogenize the different metabolism types. I personally try to make things as distinct as possible to keep things interesting, and part of that is producing different products so players have to work around that with their setup.

My idea is that making organelles produce ATP directly would increase the customisability of your cell; it allows you to combine any energy production organelle with any storage system. For example, a speed runner could get thylakoids but omit glucose production to live fast but dangerously. Or you could play an extremely long-lived iron-eater by converting ATP from iron into glucose for an additional level of storage.

This is why I would suggest not making them into separate compounds at all. An amyloplast is simply a vacuole that stores a ton of glucose. No new game mechanics needed.

I thought the reason plants had a big vacuole was so that they could keep their rigidity. If that was the case, single cells wouldn’t really need them.

Plant cells retain their rigidity using osmotic pressure. The vacuole does help with this, but so does any high concentration of dissolved particles. So it’s more of an incidental benefit I think, especially seeing as some animal cells can also be perfectly rigid without a massive vacuole.

3 Likes
blackjacksike (Weird FNAF cat) December 8, 2020, 4:07pm #5
I thought that the vacuole was that large because it was stacking water.