Is it possible for something to become an intoxicant? While I don’t expect drugs in the game, it would be a cool feature. Even if no drugs form in nature they could be part of the industrial stage, just something to deal with, like decreasing public order in a city where there is a strong presence.

Solution:import all of their minds into robots or turn them into cyborg

If there are no drugs I’ll be boycotting thrive

Thrive is free so boycotts mean nothing!

I think the question of pharmaceuticals in general is a really interesting one. Like all our best painkillers are derived from poppies so if they didn’t exist the world would be very different. Also there was this crazy plant called Silphium in ancient Rome that was apparently awesome but has now died out.

So yeah I think it would be really interesting to model that in the strategy stages. What plants and animals are available in different regions and how does that affect your society and economy? Like if you have horses on one continent and not another (as was the case) that makes a huge difference to development. 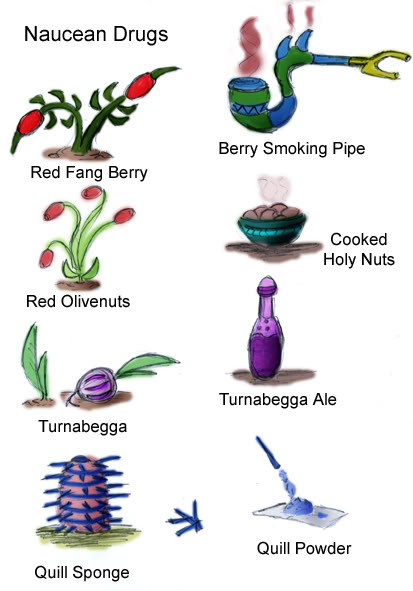 naucean_drugs413×591 41.6 KB
This was the first thing that popped into my mind when I saw this thread.

Personally, I think that there should be a mechanic where you discover drugs, either by combing powers, spices, or other materials together.

I think drugs/herbalism would be a neat thing to have. Allow the player to do some “science”. I think it would add to the game significantly.

blackjacksike (Weird FNAF cat) December 3, 2018, 11:01pm #8
Also, could drugs be a feature during aware/creature stage (I’m assuming that Aware stage is the creature stage)? Because I learnt that even animals can be drugged by eating some herbs. For instance, catnip is a drug for cats, for it can enhance their senses.
1 Like
RoboRomb (Overlord of Organisms) December 4, 2018, 12:06am #9

Image Walter White but as an alien. That would make this game thousands of times better than it already kinda is.

How about this, make a game trailer where Morgan Freeman, as an alien or something, idk, would comment over what would be happening on an alien world where Disturbance lived.

Ok, we got offtopic, back to alien drugs people.

One thing we could discuss is if you are still in the cellular stages by the time another advanced race came to be, would they try to get rid of you as you are possibly a disease causing bacteria?

I don’t think we’re going to be playing as a bacteria though. We’re starting out as microbes, and bacteria will be a source of food (and a way to unlock the mitochondria / chloroplasts)

That’s untrue actually, we’re currently planning for the player to start out as a bacterium. However civilizations will most likely not be a part of the organism stages, since the timescales are probably too different to be fair for the player

So you start as a bacterium and become a cell?

I’m just gonna say this before anyone else does. That is a perfect example of how not to necro post.

It was a joke referring to the X-series but okay… this thread’s dead R.I.P