Ok so i didn’t know where to put this but this seemed like a good spot. Iv been working on a alien taxonomy sheet for the Thrive Universe and it got me thinking about how this would work on life unrelated to our own. I expect taxonomy to be in thrive one day and i could use some information for my world.

Im studying to become a marine biologist so I know how it works on earth with it going by ancestors and how they are related to one-another. I propose that their would be a Super Domain with the planets name and we use the same lower class as far as we can. For-instance its safe to say complex life would have a nerve cord and a brain like organ so its in the phylum Chordata. But it gets complicated after that, as an example in my world all animals have 6 limbs so they cant be in the Super-Class Tetrapoda and instead are in Hexapoda and everything’s made up after that (with meaning of coarse). so my organism named a Fox wyvern and its alien taxonomy is as following 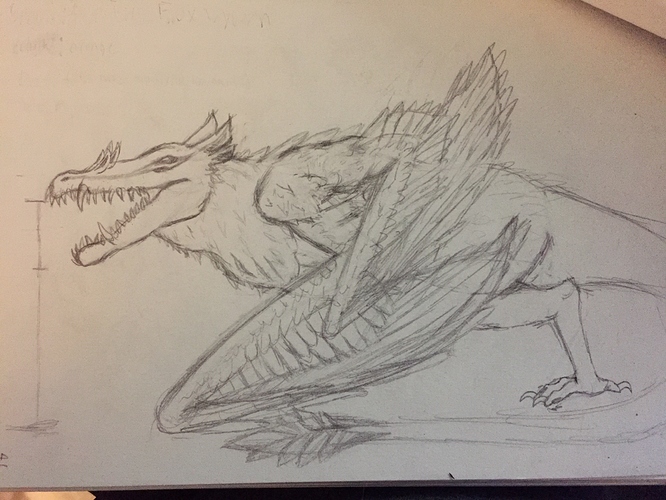 Yes, I made a full taxonomy list for my drawing… I had an unexpected day off of work yesterday and i had nothing better to do, don’t judge

. Anyway how would this work in thrive I could see land marks that determine when they split off of each other so like when a cell gets a nucleus and becomes an Eukaryote it changes/creates a Domain? Although i Have a few questions on how this would work

here’s my questions what do you guys think?

What could happen is a map of how close (determined in mutation points) every organism you’ve discovered to each other. If we run out of space, we switch to 3D distances.
With that in mind, the species map would look like a tree with the basic cell in the center, various microbes surrounding it, and it eventually branching off in a few directions.
Taxa could then be determined by mutation point distance. Ie: Species = 100 MP (1 editor step), Genus = 500 MP (5 editor steps), etc.

We also have a script for determining species names. Rudimentary, but effective.

For the name thing, I was thinking that the player can decide the common name, the genus name, and the species name. Just a thought.