"You descend thruu the thic layer of clouds onto the shore of the baren planet. On the wet, black and brown sand, filed with Iron, you see a strange blueish glimmer. This glimmer when sun hits it, starts movine ever slightly to a next patch. You see this strange gell in the shore water too…

From cureiosity, you dig slightly into the sand, uncovering what appers to be loose glimering opal like substance, expressing the faint hints of blue and green. You know, that if you were to dig deeper, you will find more of this substance, and perhaps fully formed opal.

You turn to the showel. it is fully covered in blue film, that disolves the iron in it…you come out of the sand, as far from the shore as possible, even tho, there is low risk from the mass, but by the glimmer it sims like the microorganisms also need silica, and you don’t want to lose your phone.

This was your first encounter with Blue Rot, the dominant lifeform of planet Altra."

So after this longish intro, You know how i would describe the state of my main playthruu in the game right now.

I came up with strange idea of hunter autotrops, which hunts whenever iron is presented… Basicly can live on light from the neerest star, but also actively hunts when possible. This organism, which i called Blue Rot, is basicly that… And also have silica sceleton, is eucariota which munches on iron, and generly is right now, by definition, something that is impossible to find on earth.

Even tho it may seem strange, I still play it, to get the time, and ammount of organisms, to realy make a difrence… and by this i mean, as much as possible, and time over the time it took on earth to create multicelular life( around… 4 billion years!), so perhaps i will continue this crusade till the multicelular updeat drops. 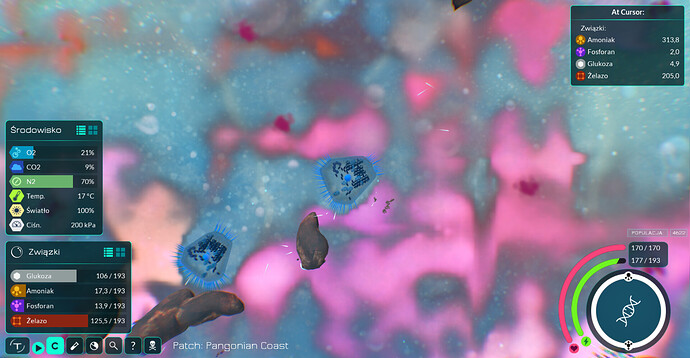 As for now, it seems like I even made survival tactic to when encountering simmular build… Animal? Plant? Bacteria?.. Any other Sillica Rot.

Basicly face enemie with spikeish flat surface, and stop moving. Ai either lost interest, or will go for so long, to burn thru the reserves of the Iron, and then starve to death( Fotosynthesis can support this life form, but only if it doesn’t try to move… Which somehow doeasn’t take to consideration rotation?)…

So basicly, welocome to my planet, which if you are not carefull enough may or may not, disolve your ship, but in exchange have tons of Diatomit and Opals, so can make you rich…

Also, i didn’t expanded to ceratain regions, like lakes or river banks, but i don’t know if i should, as all living things now have simmular build with slight wariation, aka some make poison etc.