Just a quick note at the start, since I’ll be using official definitions: The terms autotroph and heterotroph refer to whether an organism can make its own organic carbon (In Trive terms, glucose) from simple stuff like CO2 or can only use already existing organic compounds, respectively. If you’re talking about divisions in how an organism collects energy, the terms to use are chemo-organotroph (breaks down organic carbon compounds for energy), chemo-lithotroph (energy from non-organic compounds) and phototroph (you know this one). Wikipedia has a neat little table.

That means in Thrive right now, the organelles that let you be autotrophic are the thylakoids and chemosynthesizing proteins; and in eukaryotes chloroplasts and chemoplasts. The Iron oxidisers and thermosynthesizers are not (which also means the name of the latter is not really accurate).

This is kind of a shame, because it means as a predator eating these last two types is not all that useful, unlike eating the glucose filled real autotrophs. They’re more sitting alongside the rest of the ecosystem, rather than being closely connected to it. Producing glucose would also store the energy in something that is not ATP, allowing it to be shared between cells in multicellular organisms, and lasting between shortages of the energy source, like spaces between iron chunks and lack of favorable thermal gradients (in the future).

In addition, in real life cells need a lot of organic carbon to grow, perhaps more so than phosphate and ammonia, which would be like Thrive requiring glucose for growth and reproduction. This can maybe be abstracted away in the cases of the real autotrophs (which produce a lot of glucose all time) and chemo-organo-heterotrophs (since they will be eating a lot of glucose which they use for energy anyway), but your iron and temperature dependent cells would realistically have to be eating some glucose in addition. This is not strictly necessary for a game, but I think it would add to the educational value.

Now, how could you go about improving this system? I broadly see three options:

In the latter two options, I would also suggests that the chloro-, chemo- and thermoplasts do directly produce glucose instead of ATP, since on Earth the carbon fixation takes place inside the chloroplast. This also makes from the perspective of -plasts originating from a autotroph being engulfed by an otherwise heterotrophic eukaryote.

Hey there!
I am untrustedlife, the one who originally coded up the rusticyanin stuff in thrive.

I based it on FE chemolithoautotrophy, which is a thing that exists, at least as a term for iron oxidizing to generate energy. 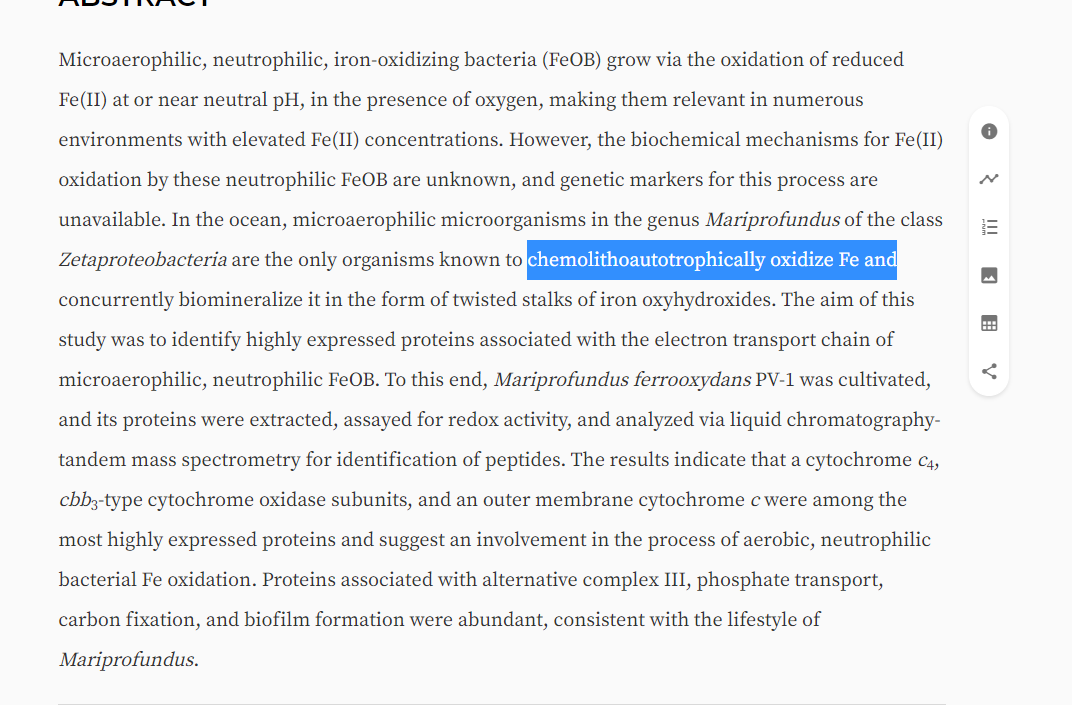 It isnt quite accurate, but i got as close as I could.
(Eg, it isnt really generating ATP directly IRL heh it is making something else, which the bacterium then uses for energy that isnt glucose)

There was also the fact that we wanted it to feel like something different,. just not another flavor of get compound->create compound → utilize generated compound to make atp

Hi there! Chemolithoautotrophy is a thing that most certainly exists, and it does involve oxidising Iron(II) for energy! So you’re not wrong there. Search that article for “carbon fixation” however and you’ll see that this organism does have the machinery to use that energy to turn CO2 into organic carbon. Absent that, they would have instead said chemolithoheterotrophically, or more likely just chemolithotrophically.

If anything, I would actually lightly criticize the authors of the paper for their wording in that sentence, not your interpretation of it.

It isnt quite accurate, but i got as close as I could.
(Eg, it isnt really generating ATP directly IRL heh it is making something else, which the bacterium then uses for energy that isnt glucose)

Actually from my cursory glance at the article I think you got that completely correct, ATP is produced first, then used for carbon fixation (CO2 → glucose) later (the Calvin cycle they mention actually requires ATP).

This does demonstrate I think what would make option 3 the cool option: these two processes aren’t really intrinsically linked, they just happen to work well together. They can exist on their own or work together with different partners than is the case here.

There was also the fact that we wanted it to feel like something different,. just not another flavor of get compound->create compound → utilize generated compound to make atp

Though I guess get compound→make ATP→make glucose from ATP is technically closer to reality in most cases.

I linked this thread on the dev discord. Also, thank you!

It would be very cool to include all the different types of chemolithoautotrophy in the game though!

It would be very cool to include all the different types of chemolithoautotrophy in the game though!

An advantage of using a separate protein/organelle for the fixation of carbon using ATP would be that any source of ATP could automatically also be a type of autotrophy. So, there’s a certain type of flexibility in that.

This also reminds me, I saw some design discussion on how to deal with the further developed thermosynthesis system, particularly on how the position of the temperature bar should change slowly so that you can move around without dying. Having it make glucose (directly or indirectly) would eliminate that problem as well.