Currently, species growth and development is static via the growth of one cell type after another. Whilst this technically works and is good enough to keep multicellular gameplay engaging, it will be a bad method to keep long term, and already limits the survivability of species to a small set of tactics that take into account how the cells are gained, and in what order. Currently, because you have to place the cells that you want to grow one after the other, each cell you add will grow in the order that it is placed, meaning that you must account for what cells are needed at what time, when, as you place cells in the editor. Instead of this, I think it’d be better to manually choose when and where each cell is placed during growth without needing to time when they’re added in the editor over numerous editing sessions.

To aid this, I think that a mechanics where you can label the turn each cell is developed would be very helpful, as would one where you can choose what turn a stem cell develops into a different, more specialized cell. By adding these mechanics, you can more efficiently control when and where what parts of your species develop over it’s life cycle., when it would lose certain traits, gain certain traits, and at what point the species has fully matured. This would end up solving a lot of current issues that players might face in keeping their species competitive in it’s environment as it grows, and solve the issues exacerbated by the inability to delete cells.

Additionally, I think that there should be some method of controlling cell type and size differences as species progress through development stages. To this end, I think that a way of specifying the number of stages there would be, categorizing them, and then altering what the species shape/cell distribution is during each stage would be useful. I say this because currently, growth consists of adding cells one at a time, which doesn’t make sense compared to realistic growth which is based on expanding the cell blueprint into various different shapes and cell quantities.

In order to achieve this, I recommend that as the species progresses from one development stage to another, it accounts for how many cells there are and in waht arrangement, and then slowly changes/adds to the cells from the former stage until it resembles the second stage exactly. Whilst it’s not technically realistic for a non-stem cell to change into another cell, it would purely be a way of pretending that cells have moved location on the blueprint. In fact, this could be conveyed more effectively by, when designing the next development stage, allowing players to grab cells and change their Hex cell location, with the turn this occurs either specified by the player or managed by the game.

The only issue i can think of with this method is how one would go about editing previous development stages when there are three or more of them. Possibly the ‘initial position’ of each cell changes, and any added cell needs to be placed with their next position altered. it’d probably involve a heck of a lot of shuffling cell positions around in both initial stage and next stage positions, as well as adding new cells on the later stage to deal with the changed arrangement.

Visually, the initial stage position and next stage position could be represented as layers of different colors with transparency, and special icons for cells added vs cells moved - You might also have the option to separate the two layers so that they’re next to each other, or hiding one/the other for comparison purposes. To clarify, the initial stage layout would be identical to how the previous stage looked and cannot be changed. When editing the stage transition, you would grab a cell and select it’s new position, or click on a space made empty to add a new cell. The new image overlaid onto the previous stage that cannot be changed, would show the new cell arrangement that you’ve created, and represent how the species would change into over time whilst it grows.

Visually, every time you click on one of the rectangles that are labeled with a turn where a cell ahs been changed, the cell being altered would change colour to become very visible, both in the initial and final position, showing how it has been altered. So if you were to scroll through the selection of turns, you would have all of the cells briefly show up, where they’ve been moved to, and whether they have been added this turn.

One possibility to solve the issue of altering earlier growth stages, would be to show the progression of the cells over time whenever you select a cell from an earlier development stage. For example, if you are on an early growth stage and select a cell, you might see the positions in later development stages as well. If there is a line between each cell to show where it has moved, you would see a path of like three lines to show where the cells travel on the organism for each stage, and allow you to easily alter them from whichever stage you’re on, whilst the cell is selected. This might be non viable however if the position you want to move the cell to in a later stage is blocked. 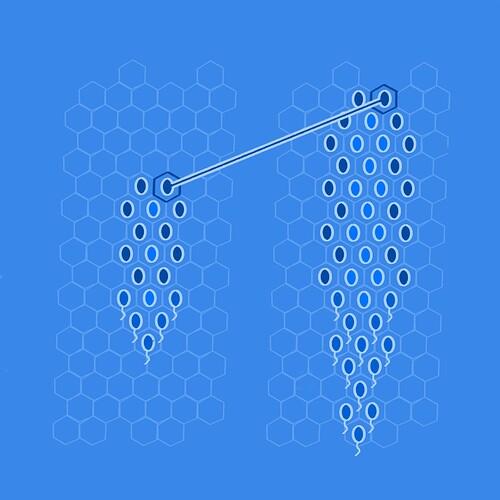 Shown in this image, the armor cell that’s on the top right of the organism is moved upwards to match the growth of the species as it gets bigger and more cells emerge at it’s center. In all likelihood, the player would be unable to move a cell if it is no longer touching the creature on the next turn of cell growth. Therefore, on each ‘turn’ you would be able to grow one cell whilst moving cells. This way, the creature grows realistically with cells being pushed outwards by the growth of new cells. Visually, it’d resemble of a conveyor-belt shuffle of cells every time a new cell grows in.

Here is an example of how the progress towards the next development stage would work: 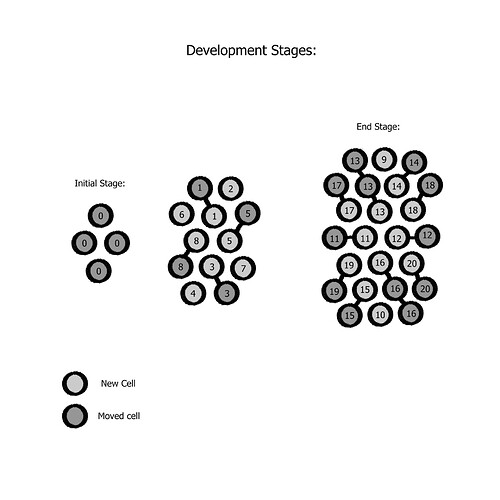 Every time you add a cell internally, you move the cells connected to it. I’ve written the cell turns in numbers on these cells, and every time you click on a turn the relevant cell would show up highlighted in a visible colour. This way, you can easily manage how the creature changes as it progresses and grows new cells. When viewing the progression towards the next stage, you wouldn’t see all of the information at once, though it would be communicated to the player in a subtle way using transparency and colour variation.

That is… a really comprehensive idea for multicellular growth, but I like the idea, though to me, seems a little too complicated.
Something I would like to add is maybe label a specific cell’s priority? Like if available to do, the growth pattern prioritizes higher priority cells to develop first and then the next one’s on the priority list.

Also FYI, you can delete cells in the multicellular editor, you need to use the [Delete] key on your keyboard, but for some reason, it doesn’t bring up the move and delete manu on cells when right clicking.

This idea would exponentially increase the compatibility to skin cells, cuz they slowly harden as new cells push them to the surface, its not that complicated, but will take time.

i like this, but as Vexene mentioned its quite complicated. actually this might make a good basis for the tissue editor and solve lifetime development, idk i’d like to hear a dev’s option on plausibly.

I think this will work well, player can design the stages, and player should have a template system.

the cells should be able to grow back

Here is a quickly drawn example of what the player would see when they create a creature and examine the various paths of cell growth: 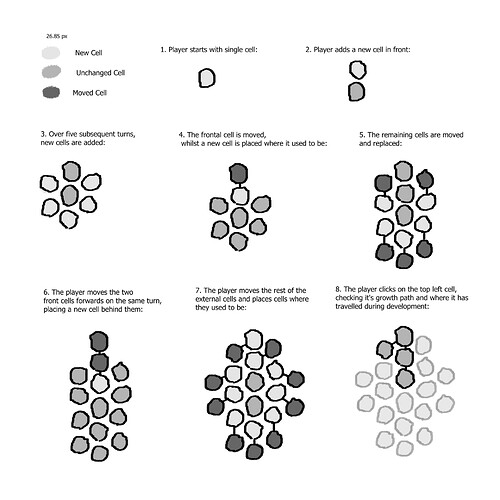 Some of the turns consist of multiple movements in order to fit them into the canvas. In practice, the player would make each movement of the cell individually.

When clicking on a cell, the player would be able to see where it has moved in previous turns if at all, and be able to jump to a timestamp to alter cell positions retroactively.

When visiting a timestamp, the schematic of the creature would show the cells that are present at that stage of growth. If changes are made, the changes must be made to future timestamps before they can be accepted.

Maybe to simulate neoteny, timestamps/stages of growth can be deleted for a cost, removing the cell changes present there but also causing the creature to reach maximum maturity earlier.

Each timestamp on the timeline would be one cell’s worth of change.