After playing the game, I find that thrive in it’s current form is the most realistic-feeling representation of life as a single celled organism in gaming. However, in light of the fact that the cell stage is still subject to change, and thanks to the window into the microscopic world that the ‘journey to the microcosmos’ youtube channel provides us, i propose incorporating as many visual details from that channel’s appearance as possible.

To begin with, the microbes displayed in the ‘journey to the microcosmos’ usually have a shadowy outline which separates them from the background, producing a stark contrast: 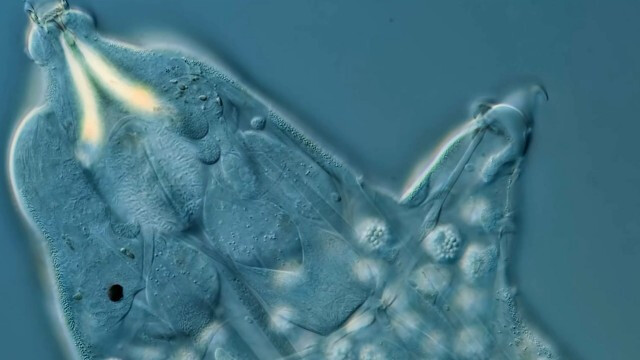 The second detail that’s worth focusing on is the fact that at very small scales, the background environment is a much more uniform blue with differences only in colour gradient and light refraction, rather than being full of background objects such as in the current thrive background: 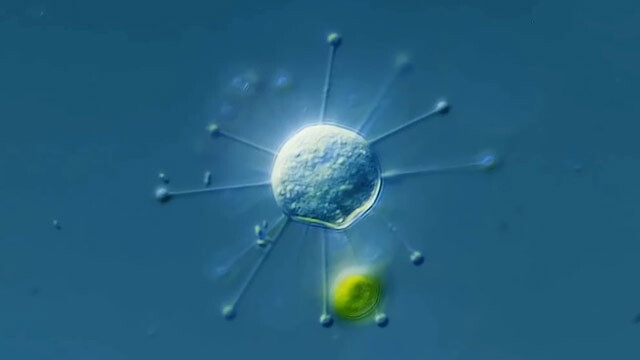 Outside of the organisms that are ‘in frame’ and can interact with the player’s organisms, the background detritus is all a very similar shade of flat colour that produces a sleek, eye-catching contrast between the organisms and their environment. And even when many background details are present, they are very out of focus and blurry:

In my opinion, shifting towards an art style that utilizes areas of low res and blurry detail to emphasize contrast and focus the eyes of the player onto the organisms would make the game more visually appealing, digestible, realistic and pretty. In the areas of barren ocean when on the hunt for resources, your organism would stick out agaisnt the backdrop and look very striking, emphasizing how alone and stranded the player is. And when in a dense mass of teeming life, with lots of action going on around them, the player will feel a greater sense of numbers since each organism will be easier to identify, and their movements more overwhelming and notable.

Speaking of blurriness, my third suggestion for improving the art style of the cell stage, is to selectively blur parts of the cell based on it’s location in the 3d space compared to the player camera’s area of focus, such as on flagellum when they wiggle into different locations, sections of the body as it undulates through the water, and parts of the cell as it’s idol animation plays and certain components drift in and out of focus, or rise up and down relative to the cell’s 3d height.

Doing this would probably be the hardest thing to accomplish when programming, but it’d give the artstyle a great deal of authenticity as though we are looking in on the world of our cell via a microscope. It’d also affect other cells based on distance, leading to the environment looking more realistic as blurry cells dart about around you, especially emphasized on the smaller cells. Additionally, the refraction of water as it’s distorted by the passage of cells adn therefore affects how the light hits it could play a big part in this.

Shown with the walk cycle of the tardigrade, the legs that are further in the background and foreground get blurrier than the main body, giving a sense of depth that feels very realistic:

I genuinely think that it’s possible for this game to look nearly identical to real life microbes and the most attractive visuals of them that we can capture on film. Not only would it enhance the believability of the ecosystem during the cell and early multicellular stages, it would also make the game look cleaner and more sleek in how it’s portrayed the the player, and feel nicer to play.

By using including these visual improvements, we can make the game match real life much more closely and fool the player into thinking that they are observing footage of actual microscopic wildlife, and by doing so enhance their gaming experience a lot.

Another feature that would look cool, especially with this minimalist art suggestion, are dark and light spots, as they will make the background less monotonous, and would help balancing the overpowered photosynthesis.

The “selective blurriness” would also look good with the iron chunks, since, currently, it seems that they’re floating over the world. And I think that the cell blur would only be possible in the near future, as the cell membrane is 2d — although there is work being done to implement the 3d membrane.

I’ll link some posts and discussions about this topic: Hey guys, Nick here, and welcome to today’s Mini Update. This time we’re going to be talking about blur, and more specifically how making what you’re looking at harder to see will make it look nicer. Hopefully this isn’t saying anything about our...

Hey guys, Nick here, and back with the next Mini Update. Today we will discuss the other approaches towards underwater sensation, namely visual water effects, fluid dynamics, and particle effects. 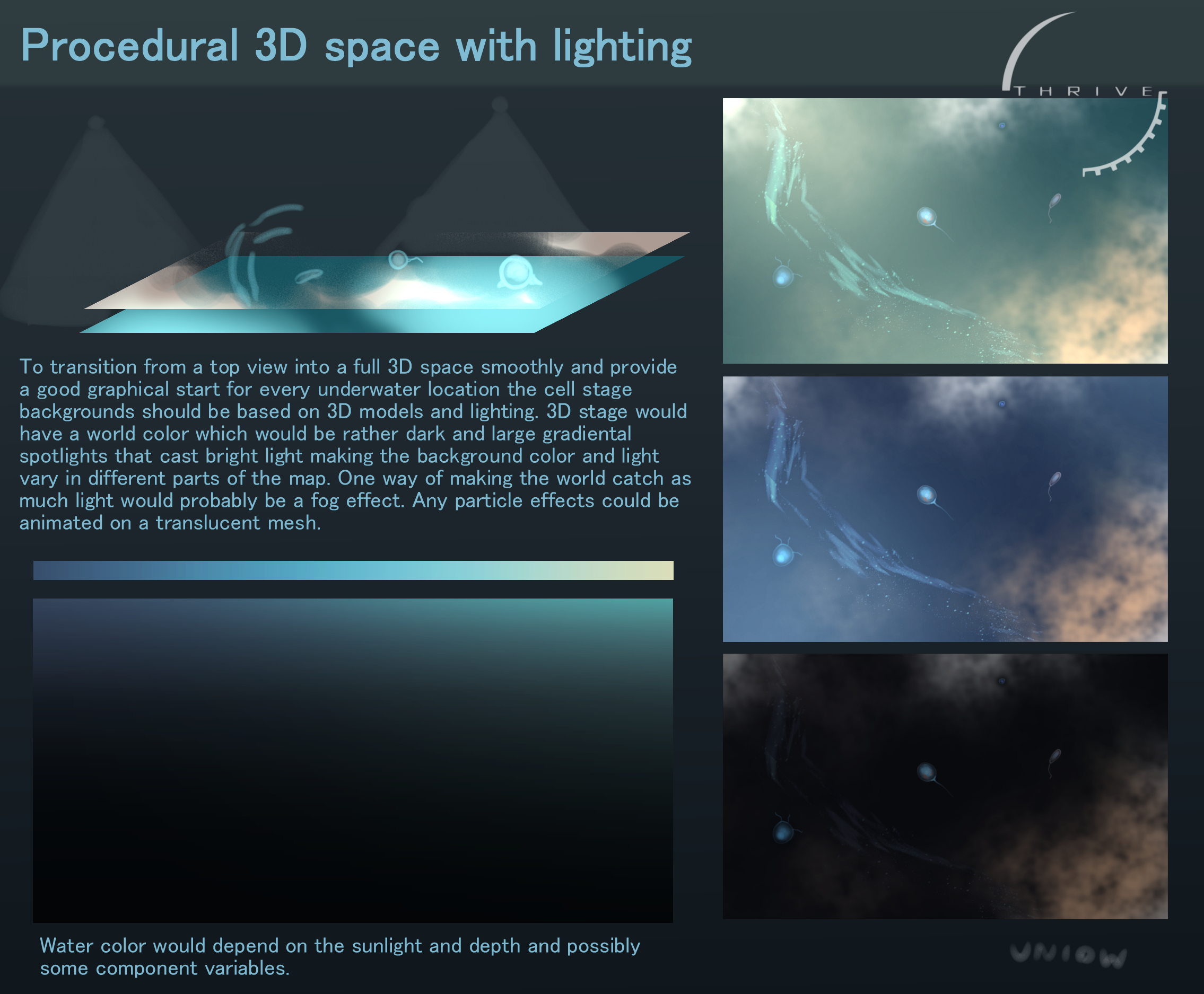 Welcome to the forums!

As someone who is also itching for a graphics update, the importance of how Thrive looks is essential for what it is trying to be. Good ideas here, but I would like to point some things out.

First, I think it is important to realize that many of the glimpses we have into the microscopic world are a bit flawed because we are looking at them through glass tiles under a strong light with a microscope. For example, the shadowy contrast and the selective blurring effects you see in footage I think is due to the artificial light and lenses we observe these organisms with, and the “flatness” of the image (some types of microscopes are better at preventing this flatness) is generally due to a limited depth of field as two glass slides are pressed against each other. As such, I think Thrive has some artistic liberty in regards to stylizing cells, which are otherwise rather transparent and opaque, and I don’t think cells should appear to be living in an artificial or sterile environment.

I do agree with your notes on the background however, which should generally be a gradient based on the theme of the patch with particle effects and blur to indicate the scale of your organism. I’d say most Thrive developers agree with you, but the issue is that we are lacking in graphic programming capacities right now, so we’re basically waiting for someone with those skill-sets.

Also, in regards to the photosynthesis/light problem; I think it’s better if we just have a day and night cycle instead of a light noise map. We want to encourage photosynthesizers to stay still to conserve energy, not move around in pursuit of light, so that nerf would be a bit more productive I think.

only real problem with all this is it will look absolutely terrible on the lowest settings where blur may not be possible (blurring is a form of image processing usually done on the GPU, with so many of you not even having one and playing on laptops, I feel like it would be pretty bad to make blur and DOF a core feature of the art).

Other than that, you should keep in mind the fact skill levels along with equipment are up and down on the team, so not everyone is capable of that level of fidelity and detail in their models and textures.

the background thing would be a fairly compact shader but, it feels like Uniow is doing a whole big effort to remake them and I don’t feel like just RGB valuing away his textures without seeing his plans first.

I had idea to make maximum saturation of membrane colors lower and making organelles smaller and less opaque.