So I’ve thought about it, and I have reached my decision. Your progress as a whole has inspired me to follow in your footsteps. I will be making my own JRPG combining the complex storytelling and archetypes of Chrono Trigger with the scale, themes, and characters of Cosmos Quest, with the title of this topic. And to commemorate this game, I’m making the Disturbance a playable character and an important role in the story. I’ll be starting the development on Godot, though I may change engines in the future. Thanks for everything. I’ll post my Updates on this thread.

4-21-2020
Update #1 - Prologue
If I’m going to present my imagination to the world, I should write it down somewhere. So here’s the base of the whole game.
I got half of my inspiration by the aforementioned Cosmos Quest, an idle-game about technological evolution from lowly, rugged Cavemen to perfect, omniversal Drifters. There also happens to be many heroes and monsters that you can battle with, all with developed backstories. To set the main path of the story, I’ve chosen one character to play the lead role in this game: 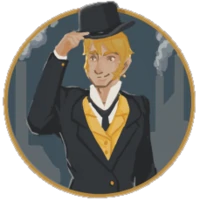 Carlton Bladesung (His name is just Carl in Cosmos Quest; I extended it to give a feel of depth)
And without further ado, here’s the in-game prologue:

Today…
I will tell you the tale of a long-lost legend.

Long ago, in the northernmost parts of Victorian Britain, there laid a small village known as New Hartley, 6 miles north of Tynemouth and 4 miles south of Blyth. New Hartley was famed for its abundance of coal veins, and each and every ore was precious to its citizens. However, the town was not without its dark secrets. The mines were actually in an infinite cave dimension, and the coals were created by Gled, a fearsome spirit of addiction and greed. The citizens of its predecessor Hartley had been mining in his world since 1291. When the Steam Age arrived, the town’s ambitions were strengthened, and they dug faster than ever. No one dared control their consumptive instincts.

However, soon enough, a young boy was born in the village. His hair was golden, his voice strong as thunder, his thoughts centuries ahead, his soul emphatic and forgiving, and his intuition off the charts. This perfect child was given the name Carlton Bladesung. He is the hero of our story. Although it would seem that the child would be praised, he wasn’t interested in mining ancient carbon for pure profit, or hurting the earth as a side effect. The citizens were intoxicated by the power of the coals, whereas Carl was immune, so the folks wrongly assumed, backed with his character, that the blonde was a familiar of the deceiving Lucifer, and outcasted him. Again and again, the people pushed him off just because he was vastly different, and Carl suffered the status of the inferior. One innocent girl took it upon herself to befriend the shunned Carlton. The blessed Gwenfrewi tried many times to interact with the alleged demon, but her attempts were disavowed by her father and the town’s priest Arphaxad, intent on converting Carlton towards God’s way.

Before long, the accursed night of fate arrived. A blood red comet upon the heavens heralded divine retribution for the town’s ostracizing. Piercing the skies, the storming stone struck squarely into the mines of the town, blasting a pit in seconds and sinking an entire acre of forest hundreds of meters down. Most everyone in Britain was terrified by this sign. Determined to protect the people he knew and the daughter he loved, Arphaxad ventured to the bottom of the pit to answer what seemed to be God’s disaster. Carlton, aged 13, secretly followed his rival into the mines. Neither could have guessed what was waiting at the bottom of the pit. A beast appeared, eyes glowing crimson upon an oily, gaseous, toxic mass. Gled stood far above Arphaxad, anxious for more materialism. With a musket in hand, Arphaxad ran with superhuman confidence, shooting valiantly at the monster. Many times he shot, well into the bleak night, but Gled’s skin was like diamond. The musket couldn’t even make a dent.

Arphaxad dropped to the floor fatigued. He knew he was facing the wastes of purgatory. It was then that the town’s ostracized appeared. As if to protect the priest, he stood his ground before Gled. In the darkness of the cave, the teen’s hair shone brilliantly. Arphaxad found it impossible that Carlton, the “bane” of all of creation, would come to defend the village. Baring his homemade wooden saber, Carlton sprinted toward Gled, and Gled reared his fossil fueled muscles, readying for battle. Swifter than the wind, Carlton did his best to fend off the beast while Arphaxed find out its weakspot. Gled, protected by a mystical barrier, was not easily beaten. Carlton, covered in the ashes and dust, blonde hair died black, sat exhausted before Gled.

Gled prepared for what would be a final blow. But Arphaxad couldn’t let Carlton die. With his last ounce of strength, the priest gazed heavenward and unleashed his holy power. Suddenly, the black clouds overhead dissipated. The starlight glinted off Carlton’s hair as a beacon of hope for all of humanity. The blonde felt electricity running through every one of his cells. Guided by his saber, Carlton leapt proudly to face his adversary. Channeling all his strength into his scarred and battered biceps, he sliced ferociously at Gled. The golden hair flowed in the air like grass in a summer breeze. Piece by piece, Gled fell apart. Gled’s broken body collapsed and shattered in a lake of oil. In that instant, the curse that plagued the miners of New Hartley was lifted. As the battle subsided, the sun shone over the forests once again. Arphaxad had succumbed to overconsumption of carbon dioxide and struggled to breathe. Carlton lifted the heavy body into his arms and returned to the surface.

When they reached the village, Arphaxad was near dead. Gwenfrewi rushed towards her laying father in tears. As the expiring priest held her daughter in his arms for the last time, he ask Carlton for one sole request: that he take care of Gwenfrewi as her brother. With his last dying breath, Arphaxad lost grip of her daughter. With a stream in her eyes, Gwenfrewi lay her head on the corpse, as Carlton rubbed her head gently. In a sentimental flurry, the two new siblings hugged each other tight in a bittersweet embrace. Peace settled upon New Hartley and the surrounding forest. In honor of Arphaxad’s heroic sacrifice and Carlton’s selfless bravery, the villager erected a temple within the church and built of statue of the deceased priest, now a martyr. In response, Arphaxad’s widowed wife, Mahalath, took her husband’s place as the priestess and adopted Carlton. His saber was christened “Breden-ðunor-res,” meaning “Wooden Thunder,” and placed above the statue of Arphaxad alongside his musket. The town all looked forward to the decades to come. And for the first time in his entire life, Carlton was not alone, and he had found his place.

However, this was not the end of Carlton’s story. There is much more to this tale than most people know.

5 years passed since Arphaxad and Carlton’s legendary exploits. Time passed so quickly, Gled’s defeat felt only like yesterday. Carlton was now a young adult. While strolling through the forests, he spotted a twinkle in the leaves. Once he cleared them out, it’s revealed to be a tiny headpiece. Carlton was intrigued by this discovery, but didn’t want to alarm anybody, so he stuck it behind his ear and went on with his day. When he got back home, Gwenfrewi asked him about the headpiece, but her big brother scolded her that it’s just decoration. Unbelieving, she lightly tapped it, and suddenly it glowed blue. Within the room, an augmented reality burst out of the headpiece and spread everywhere within. Both siblings were awed by this spectacle. Carlton had the sensation that he was not done with the mystical world yet. He was right to be, because this is where the real story begins.

5-3-2020
Update #2 - 8-Element Motif
First off, I’m setting a theme for the first arc of Chronos Quest. If you haven’t noticed, Carlton already has a lightning theme. This is to reflect his “Essence,” or type for the game. Essences can be of an element, genre, similarities, or even preferences. As such, the first arc of Chronos Quest will have a theme of 8 elemental powers: Earth, Air, Fire, Water, Lightning, Plants, Metal, and Ice. While you may not agree with this system, I have some basis behind this.

We have the 4 classical elements, and the other half could be considered combinations of the main four. Water suspended in cold Air freezes into Ice; Plants depend on both Water and Earth for survival; Earth under intense Fire can form Metal; Firey charges in the Air form Lightning.

Arguably, they have aligned celestial properties, which are opposed to each other, creating a balance in nature.

Moreover, these elements form a power circuit through their origins in each other, therefore not only symbolizing substances or natural qualities, but also process and stages.
Lightning excites the matter in combustible objects, causing Fire.
Fire renders all to ash, which coalesces into layers, creating Earth.
Earth is subdued to immense heat within the inner layers of the planet, eventualling bearing Metal.
Metal has a unforgiving feel, absorbing heat and leaving its surroundings in cold, forming Ice.
Ice melts in the presence of heat into Water.
Water nourishes the soil and makes up most of Plants.
Plants clean otherwise toxic surroundings into clean, breathable Air.
Air gathers within the clouds and becomes charged, manifesting into Lightning.
As you can see, these elements are interdependent in existence and power. Without even one of these elements, the others would fail to preserve. If this is so, then why is the main character of Lightning?

Well, besides cosmic properties and phases of changes, I’ve also assigned countries, virtues, colors(obviously) and many other things to the elements. More on that in a later update. To the point; Carlton was born in Britain, which I’ve assigned to Lightning, being the birthplace of the first Industrial Revolution and a hub for many Western beliefs, including medieval fantasy, with spells related to lightning being most powerful. What happens here spreads like electricity.

Lightning is the metaphor for electricity, present in every electron teleporting around every nucleus within every atom. Storms striking the primordial oceans are responsible for Abiogenesis. The connections between nerve cells are simply sparks of electricity, yet they are the base of consciousness and thought. And recent studies have shown that thought itself can manipulate matter. Check out this presentation [https://www.youtube.com/watch?v=nRSBaq3vAeY] for more specifics on just how powerful it is. Lightning, being arguably the most powerful of the 8 elements, is still at the same level of importance as the rest.

Extra note: Once I master Discourse, I’ll transfer everything I’ve written onto my own forum.