I don’t know if this has been posted about before, but checking through the bug reports I wasn’t able to find anything similar to this issue. I have had this issue for a while, but just now decided to post about it.

The actual compound density doesn’t always match up with the visual density of the cloud. I have provided some screenshots below. I don’t know if this is an intended feature or not, but if it is, would it not make more sense for denser cloud areas to look more dense?

Log
Pastebin link to the launcher log (I just ran the game to get the screenshots, then closed it): https://pastebin.com/0upAA7n4

Also if this isn’t the proper log needed, please let me know. I grabbed this from the launcher.

Screenshots:
Posted on Imgur cause I just made this account and I can’t post more than 1 photo in a single thread yet:
https://imgur.com/a/nDH4BIv

(Photo 1)
This screenshot shows how even in a sparse area of the compound cloud, the Ammonia concentration is still very high.

(Photo 2)
This is another example of a high concentration in a low visual density area.

(Photo 3)
This image shows what I would expect a high abundance area would look like. The cloud under the mouse is visually denser there.

(Photo 4)
This cloud looks just as dense as the previous one, yet the concentration is “a fair amount”. Although I can see it being slightly less than the previous one in terms of transparency, so I don’t know if this one is a bug or not.

I experienced this issue even before 0.5.6, back when it was just showed a long string of numbers instead of “a fair amount”. Does anyone else have this issue? I currently run Ubuntu 21.10, but I remember this same bug occurring on Fedora linux I believe.

I’ll take a guess that this is related to the fact that we don’t want the clouds to look like uniform blobs. Due to this there is a noise texture layer applied on top of the actual compound densities, which varies the opaqueness of the clouds even if the concentration is the same. I think you might be seeing that. Though the very dense looking area that isn’t super dense after all, might have something to do with the fact that the density values are squashed into pretty small range when sent to the shader as texture data for rendering.

It used to be back in like 0.3.4 that you could find entirely invisible clouds and get a ton of compounds from them. I think the noise texture was ramped up even higher back then. Now at least there shouldn’t be that happening anymore.

I’m always open to suggestions from experienced graphics programmers as to how we could make the clouds better, but I’ve basically tried as hard as I can with my skill level in graphics programming, and the current clouds are what I was able to make.

Ah ok I see. Yah I don’t have any experience in graphics programming myself. I do wonder though if instead of the cloud having a noise layer, that they would flow around fluidly. Then the edges could still be more transparent, and it might look similar to what we currently have, while allowing for things that are denser to look denser. That sounds like a lot of work though, and I wouldn’t know how you would go about doing that.

I do wonder though if instead of the cloud having a noise layer, that they would flow around fluidly. Then the edges could still be more transparent, and it might look similar to what we currently have,

I’ve tried disabling the noise layer with the current fluid simulation logic. It results in large evenly coloured blobs, very cartoony looking. Only really the cloud edges fade out in that mode, so it doesn’t look completely terrible but they aren’t visually interesting at all to look at.

I don’t have a screenshot of that exact thing, but here’s one cloud thing I tested, see how little “texture” the clouds end up with: 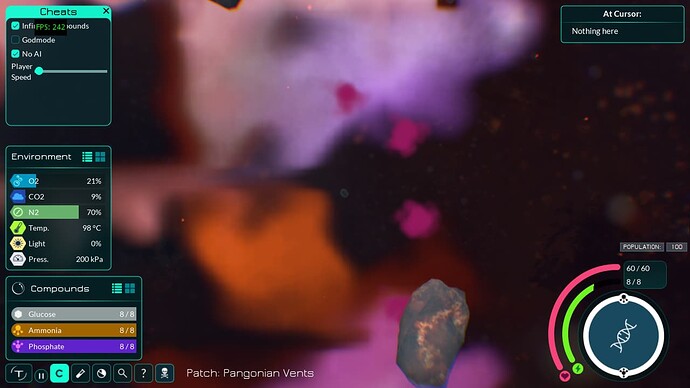 I think even that is with some noise texture applied, but even at this level the clouds start to be pretty uniform blobs.

I wonder if you could tie the density value to the texture of that location of the sprite. I don’t know how difficult it would be (maybe the entire cloud coding would have to be reworked, and idk if that should happen). But maybe you could somehow tell the noise texture or something to be smaller over a part of the cloud that is less dense. And the noise texture would be visually more opaque over parts of the cloud that are more dense.

Sounds like a recipe to cause seams. I tried to increase the noise texture repeat count in the shader and I ended up with visible seams where the noise texture changed locations. So that sounds very much like something that would have a lot of issues regarding seams between the areas with different noise texture scales.