After reading the discussion posts from the dev team about bridging the gap between single and multicell stages, I think that something to consider is the use of tissue layers. Instead of going from placing organelles to placing individual cells in a multicellular organism, go from single cell (edit by organelles) to colony (edit by single cells) to multicellular (edit by tissue layers), and the orientation and structure of said tissue layers can then be modified by drawing lines/shapes of various tissue types. 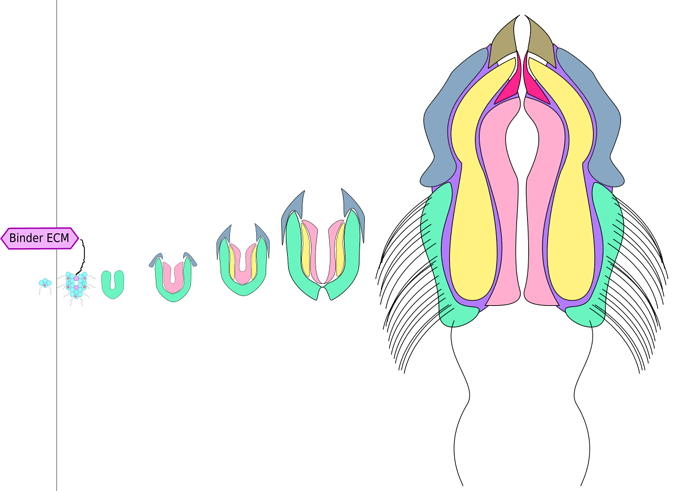 Ok here’s what I’m thinking. Different tissue types can be added, with all different types connected by default connective tissue (purple) that automatically fills in gaps. Digestive tissue can be used to form rudimentary gut structures (light pink), while some tissues serve as energy/protein storage (yellow). External facing tissues like motile (green) and protective (blue) alter how the cell interacts with the environment, while predatory/defensive structures such as the teeth (tan) can be actuated by a basic muscle (hot pink) attachment (from the coding side of things, this can be simplified greatly by choosing a fixed rotation (attachment) point when placing the part, and then another fixed point for the muscle, which determines the force generated based on the direction of pull and distance from tooth attachment point) [soft body physics at some point would be dope though!].
Image
I would say there’s a limit on the amount of tissue that can be added per evolution, which is why I have drawn multiple stages with a slowly increasing number of tissue types.

Something that’s not super realistic, but would definitely be a fun game mechanic, would be similar to in spore, where by consuming organisms with certain features, you could unlock those features. Though in this case, I would say that you should need to fill a progress bar on unlocking that tissue type by doing things that would benefit from said tissue, and have eating creatures with that tissue boost the progress somewhat.
so for example, getting spiked by other creatures or getting damaged by environmental abrasion would start filling up the armor tissue progress bar, and once that’s unlocked, using said armor as a rudimentary weapon would move towards unlocking tooth tissue
certain tissues could also have contractility added as a feature in the editor, so you could essentially choose which tissue specializes to become muscle, which would add another level of interest and complexity later on.

Some additional details: the organisms are designed in cross section, so if this were put into 3d, it would be radially symmetrical, and through gameplay progress, symmetry levels would be unlocked in the progression of 5+random-lateral, 2+random-lateral (ex 2+1= trilateral), and then 2-lateral, which is of course bilateral. Now of course the player does not have to choose to go down in symmetry axes, but if they want to get to bilateral, they have to pass through the other options first, which is important because it scales with the degree of genetic “memory” there is available for more specialization per segment, ergo. it takes more genetic code to have 4 arms radially arranged but one of each pair has spikes instead of cilia, than it does to have 4 arms with both cilia and spikes. as you progress, you can unlock more “slices”, which means that more structures can be created for a given segment that will be propagated around the body. An example of this would be the arm of a starfish, which, very simplistically has a long middle section, and two short joining sections on either side. This could be considered to be made of 2 or 3 different slices depending on how you want to cut it up.
As the animal moves towards bilateral symmetry (should the player choose to do so) the editor would be visualizing the creature in 3d and editing in different slices in 2d cross section, and then further editing of external structures in a way that is propagated with the appropriate symmetry to the rest of the creature. This is important because otherwise all players could make is a blob, no gaps or limbs. You could get around editing in 3d by allowing empty space within slices, which would allow limbs, slits, and holes in creatures to be generated without 3d editing tools.

I could suggest some kind of scale, for example, the scale of aromorphosis, after filling which the player gets the opportunity to carry out, in fact, aromorphosis. That is, to create a new type of tissue, or to develop a full-fledged organ. At the same time, the addition and removal of body segments is not an aromorphosis, and for this mechanics I explained in a post about the issues of segmentation and development of limbs, in short, over time, the cost of reducing something decreases, and the cost of developing something new grows, the cost of change is already about one existing. Well, after filling the aromorphosis scale, the player gets the opportunity to make a significant leap in evolution, for example, to acquire a new tissue. With each subsequent aromorphosis, the scale accumulates longer and longer, thus, over time, the body becomes more conservative, which, it seems to me, is the case in the real world, the more complex the organism, the more conservative it is