Here is where you try to disprove the physics theory’s that you don’t like and then someone else tries to defend them so it’s not one sided, like that FREAKING DIAMOND MODEL of space time.

Please hate on that one the most because it is (In my opinion) the worst best representation of spacetime there is because it disregards the fact that no matter how fast you travel, your not going back in time or even slowing down time for that matter. anyway I’m getting off topic, here is were you disprove scientific theory’s because you hate them and there’s nowhere else to do it online. I’m looking forward to your rants, thank you and let me know what you think down below.

I’m a bit confused about this topic…

Actually the way to disprove (or should I say, improve) a theory is to find an experiment or a situation where the theory doesn’t apply. For example Newtonian gravity was amended by Einstein for specific cases where the simplified model of gravity (without taking relativistic effects into account) resulted in incorrect calculations. For example the orbit of Mercury seemed to violate the laws of gravity until they were amended. Similarly to disprove a theory entirely you would have to refute enough of the experiments that established that theory as being done incorrectly, otherwise there’ll be a specific problem domain where the theory still applies.
Granted it’s much more difficult, and some even say there’s no point / these aren’t really scientific theories rather they are educated guesses, to disprove something like string theory. These are not grounded in scientific observations and these theories also don’t make testable predictions. So really these aren’t proper scientific theories with any use.

And besides, if you actually did all the work to disprove an existing theory yourself, publish it! As a book or on your own website, it doesn’t really matter, but it means the information will be easy to find for those who want to know, and you could make money off of it; as apposed to posting it on a random internet forum about a video game.
So this thread is only really useful for saying that theories that are already proven false, are false.

I’m talking about the theory’s that don’t actually have an experiment behind them and are just people thinking about how the universe works on a grander scale.

I don’t think those really need to be disproven, it’s only the media(?) and people who have very little clue about doing actual science that are taking them seriously. Other people know that it’s not worth the time to try to “disprove” things that weren’t real in the first place.

Maybe something like “Common Science Tropes That Don’t Make Sense” would be a better title for the thread you want? As others are saying, a forum thread isn’t the best medium for dismantling well-established scientific ideals.

Along those lines, something I don’t get is the idea that an alien spaceship crashed on Earth, like was claimed in Roswell. If a civilization is advanced enough to be capable of interstellar travel, I seriously doubt that they would still be dealing with the possibility of crashing on whatever planet they traveled to.

I’m talking about the theory’s that don’t actually have an experiment behind them and are just people thinking about how the universe works on a grander scale.

That’s philosophy, usually. Or hypotheses. Hypotheses are an important part of science, and philosophy often works to inspire scientists. Dismantling something that isn’t factual to begin with is only useful if people are trying to convince you it’s factual.

Also, time does slow down for quickly moving objects. Relative to slower moving objects, that is. For the object that is moving quickly, it would seem more like time is speeding up. The quicker moving object changes at the same speed it normally would, but the slower objects appear to change faster from its perspective. That’s because it’s not the entire universe’s clock that slows down, but specifically the clock of the object moving quickly. When a turtle watches a rabbit pass it by, the turtle believes the rabbit is fast. When the rabbit passes the turtle by, it believes the turtle is slow. Both viewpoints are equally true, but neither viewpoints are the same.

Thus, if we assume we’re the ones who are moving slowly, then indeed time does slow down for anything moving quicker. 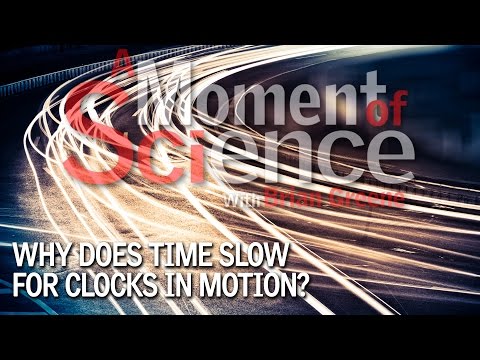 Embedded the video in your post for you, which makes it much easier for people to see what the video is and saves everyone an useless click.