With the patch map generation feature included in the last release, I think that it would be a fun and constructive exercise to share some of the worlds that we encounter in our playthroughs. I propose to display the planet seed number (so that anyone may actually play on it for themselves), the names of their regions (continents/oceans) and to try to infer and imagine how the actual, associated planets could actually be. Additionally, we could also share some of the species that have evolved on it. I will start with the following world:

Life has not yet appeared in 2049037443, a relatively cold planet with an intricate system of underwater caves that could one day host and be explored by chemosynthesizing organisms.

The surface of the Molfetolean ocean is regularly covered by a thin layer of ice. However, in the depths, magma from the its mantle finds a way to the cold ocean through a local fissure in the rocky crust. There, water is heated and violently shaked, nutrients are mixed with the ocean and chemical reactions are accelerated. Those conditions may soon give way to the first, simple life forms, … unless comets and asteroids left from the formation of its stellar system provide an alternative. The absence of further underwater regions with volcanic activity suggests a relatively reduced amount of internal heat, and imply that plate tectonics may be limited or unexistent.

The largest emerged landmasses are the continents of Karynia, Ravepania and Tafunese. The existence of estuaries on their shores suggests an active water cycle, and a significant elevation of the terrain in the interior. The deepest point corresponds to the sea floor of the Margolean ocean, about 3000 m below the sea level. 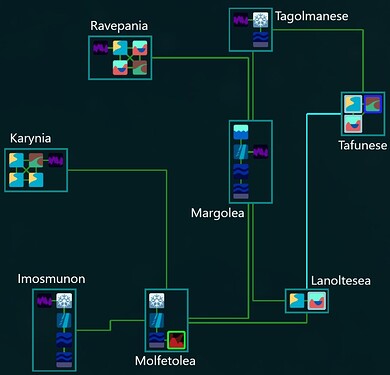 I love this idea. I hope it gains traction.

Microscopic life has been thriving on the cold planet 549946852 for about 3000 million years. When viewed from space, about half of its surface appears to be covered by a layer of bright, shiny ice. The equatorial, deep blue Labaslamosese Ocean breaks such monotony. In addition, the lonely, emerged continent of Cavasia is splashed with shades of brown, grey and black.

Such continent was formed as a result of an ancient collision between two continental crusts. The consequent uplift formed a majestic mountain range on its center causing the appearance of 2 large rivers bringing sediments and nutrients to the ocean. The northern, colder, islands of Kalkonmat and Edonia are part of the same continental crust as the northern half of Cavasia, the three being only separated by the shallow sea of Golgalkalon. 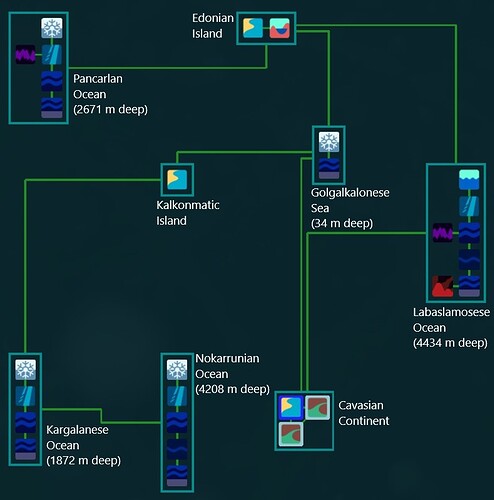 At first sight, there is no visual proof of the existence of life. However, when examining closely and patiently, glimpses of yellowish, spooky spots can be observed at almost any place where liquid water is exposed to the atmosphere. These spots correspond to high concentrations of an ancient and simple microorganism. Such organism is known as Pimenala cyadata. 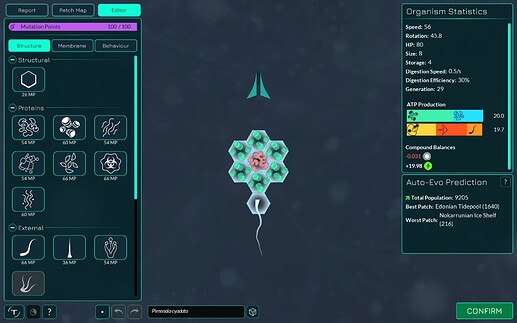 With its photosynthetic proteins and glucose digesting enzymes, it can autotrophically sustain its own metabolism and its membrane even in the higher latitude zones, under a permanent layer of ice which reduces the amount of sunlight available. Therefore, it can be found in absolutely all surface patches on the planet.

Its cellulose membrane offers it a considerable protection and a reduced metabolic cost, while its single flagellum allows it to outrun most of its potential, usually much bigger predators. In a world dominated by complex bacteria and gigantic eukaryotes, Pimenala cyadata is a remainder that evolutionary success does not, primarily, involve complexity, but rather adaptability to the environment. 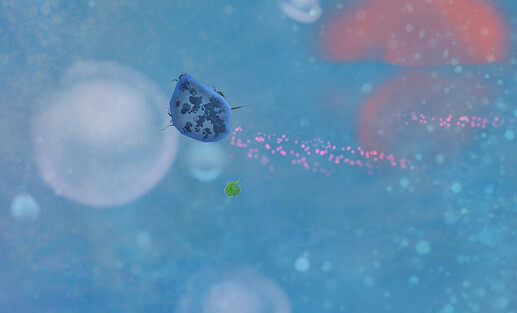