Have you guys heard of evo search for eden or the shinka ron (japanese predecessor for evo sfe on pc)? And i havent seen anything likethis since but i liked it. The esfe didnt have good story but wasnt a bad one.
And if youre asking what esfe is then check there wiki.

i have heard of it, and i played it on an emulator on my browser

And how far did you get? I got to the human boss I think.

Anyway, I’ve played through the game once before thanks to the fanmade translation (emulation process is a bit weird since this thing’s spread across multiple floppy disks). Unlike EVO, it’s a turn-based RPG, and evolution is based off of increasing one of four stats to become a different species, rather than mixing and maxing different parts.

I took screencaps of all the playable species in the first age (Devonian Period). They’re organized by which tier of evolution they’re in, with the leftmost ones (associated with the “Endurance” and “Wisdom” stats) coming first before the rightmost ones (associated with the “Attack” and “Vitality” stats). I also included their in-game descriptions; they’re from 1990, so don’t expect them to match with modern findings all the time. Below that, you’ll also find any unique abilities each species can use.

Here’s the translated manual’s timeline of the PC98 game’s universe. This is just to put into perspective how bizarre the story is (not that that’s a bad thing). 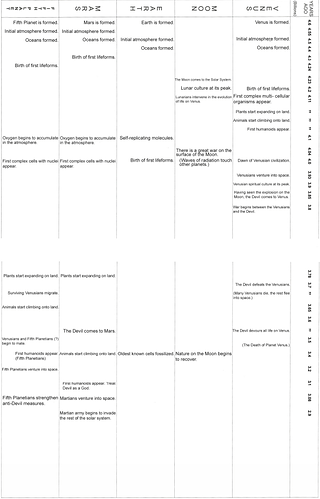 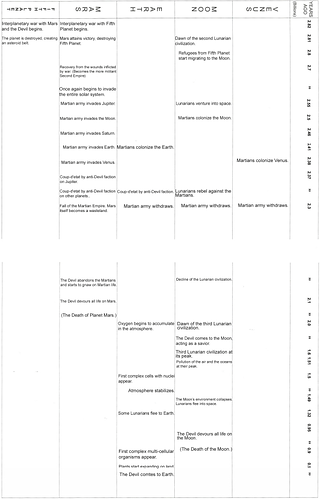 Anyway, I found the time to get the portraits and descriptions of the species from the second age (Carboniferous Period). This is when the developers started adding made-up creatures to fill in gaps. This age makes heavy use them; only half of the new species that you actually get to play as (rather than become in transition to the next age) are real. In later ages, you can usually tell them apart from the real ones short-hand due to their names being portmanteaus of the species they’re filling gaps between.

Here’s the third age (Permian Period). It’s the first age to have non-starter creatures in the beginning tier.

There are also NPC-only slimes that appear in one of the age’s dungeons. This is an Enix game, so naturally they’re Dragon Quest style.

Unfortunately there does not seem to be a mod tool for splitting a post. But me posting this message will break your consecutive post streak. 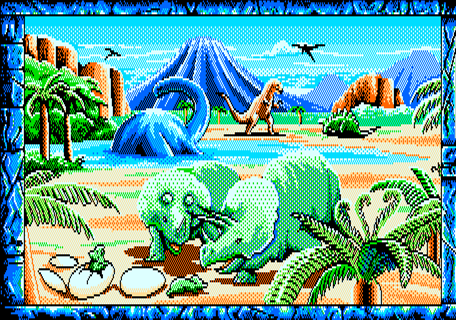 You can only evolve into a specific Tier 1 species from the closest Tier 2 species, and whichever Tier 1 species you become decides which branch Chapter 5 will place you in as a Tier 0 species. Tupai and Baluchitherium are mammals, while Kawamahtan and Tyrannodon are hypothetical dinosaur survivors of the asteroid impact.

NPC-only species include marine creatures encountered while crossing the Drake Passage and an unfriendly pack of Allosaurs.