I absolutely love what thrive has become. and i’ve decided to try to create what i personally think thrive will look like when its done. 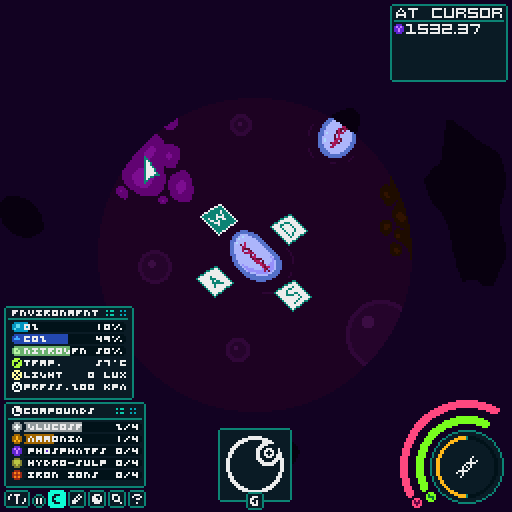 This shows basically what thrive’s firsts moments look like. Already you can see certain basic things like bubbles which the player can interact with. a dark ring outside of the cell which represents the cells ‘visual’/chemo range. The darkness hides compound clouds and bubbles but shows silhouettes of other cells and rocks. the dark ring outside of the cell can be illuminated by things like bio-luminescent vacuoles. but this is a prokaryote and yet to undergo symbiosis and evolve a biolumiscence

you can also see the movement tutorial in action (the w a s d keys around the cell) alongside the big gui button thats shows how to engulf. 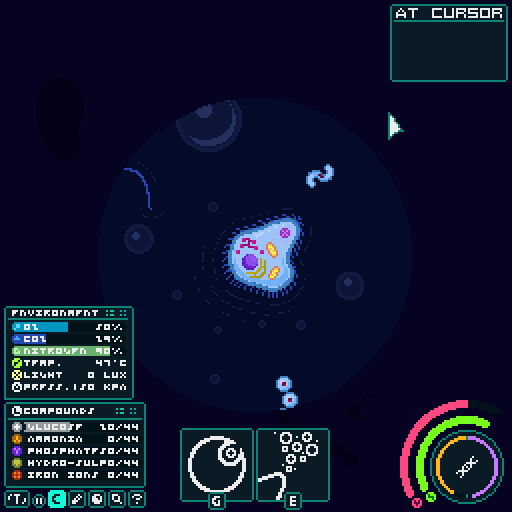 So here we can see some new stuff. first thing is cillia. i’ve decided that it would make sense for cillia to be split into 2 groups. locomotive cillia, and filterfeeding cillia. here you can see the locomotive type.

some new things you may/may not have noticed is the inclusion of the new toxin shooting button gui. which basically tells the player how to shoot toxin clouds once toxin organelles are evolved. and right above that button is colonial cocci bacteria (Stringy circle worm bacteria colonies). and to the right of our eukaryote cell is a spiral shaped cell. 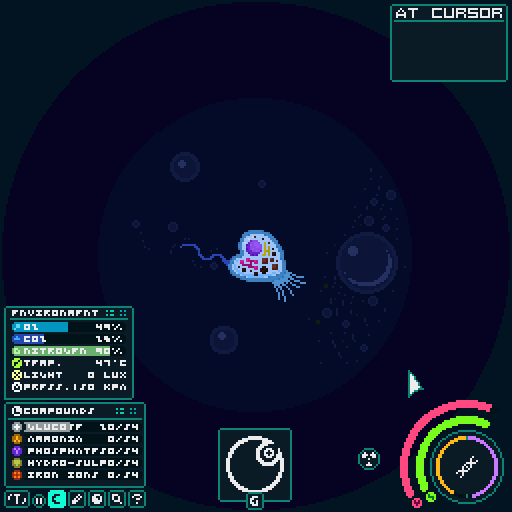 here you can see a eukaryote with 'melanosomes???" it uses to protect itself from ionizing radiation from the uranium rich waters of its home. here a current is dragging small uranium rock particulates close to the cell causing it to slowly become irradiated. however thanks to its melanosomes its fairly protected from the radiation. and would require a much larger dosage in order to have serious damage done.

you may have also noticed the wierd hairy protrusion form the tip of the cell. no this is not the filter feeding cillia i mentioned in the previous image. but rather microvilli. basically one of the closest things to a mouth in the game. (with the exception of filterfeeding cillia) which allows this cell to absorb compounds faster or something like that.

i quite enjoy making these fun fan depictions. dont be suprised if i decide to create some more later on in the near future.

Can you do the some but with resolution and colours of gameboy? Just one.

Sure! Ill try to create a new one with gameboy colors.

Depending on how much i enjoy it i might make some more.

Managed to finish one:

felt really restricted with the color and resolution but still tried nonetheless.

here you can see a photosynthetic bacteria (the player) being engulfed. 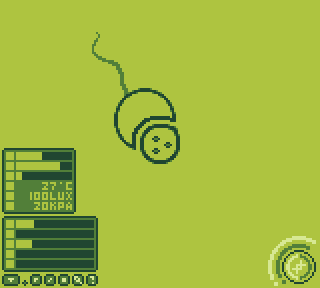 Kinda late to this but I love your artstyle! Is there any possibility you will make more of these in the future?

i’ve kinda run out of ideas for things to make. not to mention the fact that im going to go clean off of electronic devices as a challenge for new years, give it maybe a week and you might see something.

i’ve decided to do one more before i go clean. 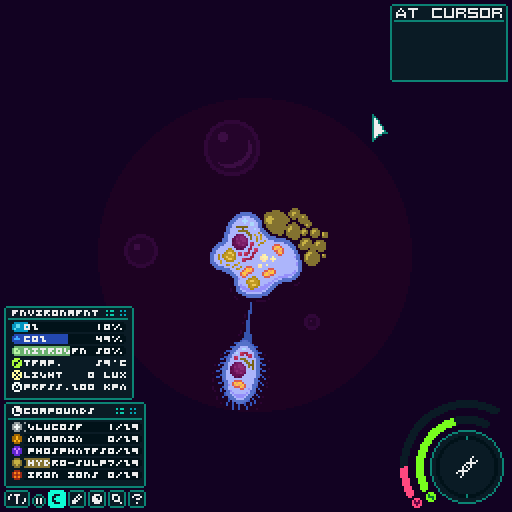 here is a chemosynthetic amoeba being predated upon. i’ve seen discussions of how membrane type and rigidity will effect a cells abilities. which is why this amoeba’s softness grants it greater mobility and membrane regenerative powers. But it is prone to easily being pierced by pili and toxins more easily penetrate into the cell.

you may have also noticed some strange bright yellow circles near the middle of the cell. those are lysosomes which allow the cell to more efficiently digest food. making the amoeba both a chemosynthesisiser and a scavenger/decomposer.

God the art style works so well for a microbe section its really well done!!!

so. just dropping in a bit more:

i was unhappy with the way my old stuff looked. and so i upscaled and did some stuff: 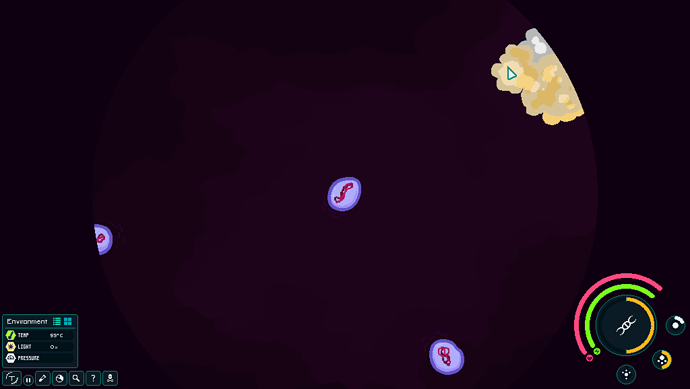 take note of how the environment gui only shows the temperature, light, and pressure. this is because this cell has yet to evolve any enzymes/proteins which metabolize atmospheric gases

same thing for the ui on the bottom right. adding additional cytoplasm only increases how much more space you have for glucose, ammonia, and phosphate. only with the mutation of new proteins/enzymes that use other compounds will your cell be able to store these compounds. 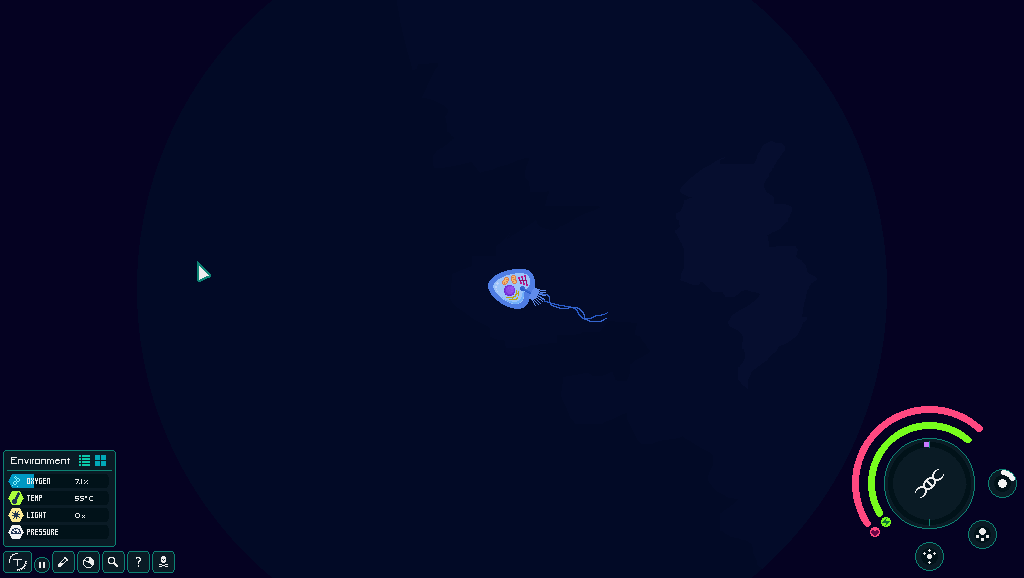 here you can see a eukaryotic cell just swimming. notice how its got two flagella and a cone of villi surrounding the two. this is because the flagella create a current which it uses to catch bacteria in the water and sticks it to the villi before being engulfed.

im not sure how i feel about the ui on the right for eukaryotes. because most eukaryotes are capable of sexual reproduction and not just mitosis. so i feel like next time i might try to find a way to show this?

These look great. I particularly like the reduced information due to the player lacking organelles. Perhaps the circle of “vision” around the player could be very small at the beginning and expand as the creature’s sensory organelles are developed. At the beginning of the game there would be no predators and the area would be nutrient-rich, so blindly bumbling would not be an issue for the first few generations. It also would incentivize the player to develop senses, particularly if other organisms have them and are outcompeting the player.

I think sexual reproduction in Thrive could be like in Spore. There is a little bar that represents gamete readiness, and once it is filled the player finds a mate and clicks a button to reproduce. The process of finding a mate could be made much more interesting than in Spore, though. After all, sexual selection is very important among large animals. If the player is capable of both sexual and asexual reproduction, then he can choose to collect resources and reproduce as is done in Thrive currently or do the more laborious process of sexual selection in order to have more mutation points. That would make sense, as sexual reproduction increases mutation rates.

You describe the flagella and vilii being used in feeding, but your illustration does not show that. I am curious about how you think that might appear. Presumably the eukaryote is much larger than the bacteria it eats, so there could potentially be many cells being consumed simultaneously. However, the game cannot handle too many cells onscreen at once, so a eukaryote awash in 50 tiny bacteria would not be possible if the game is simulating each bacterium. Maybe the bacteria could be represented by “clouds” once the player’s organism becomes large enough. That way they would still be in the game and their representation would be easily parsed due to it mimicking previous clouds of nutrients.

Presumably the eukaryote is much larger than the bacteria it eats, so there could potentially be many cells being consumed simultaneously.

From what I’ve seen in microscope recordings, a bacterium would be around the size of the mitochondrion, (which makes sense, if the endosymbiosis theory would be correct) and usually there’d be around 1 per time anyway, the world is pretty sparsely populated.