Ideas for the Aware Stage [Put your ideas in this thread]

Display features (e.g. bright colors, elaborate horns, mating dances) that make it harder to survive but grant more MP. Could maybe act as sort of a hard mode for the game. Would effectively implement the real-life situation of peacocks, birds of paradise, Hercules beetles, and deer.

Hormonal system/sympathetic nervous system, basically you would have a menu where you have to evolve glands to access slots, and you’d fill the slots with various roles. You could upgrade them later. They’d influence behavior, such as enforcing mating instincts or fearing predators, basically it increases the survival/reproduction rate of non-player members of your species (trying to keep it within the constraints of the current auto-evo system) and/or enforces instincts in creatures who’d be smart enough to just choose to not mate when you don’t want your species to be a robots. Cost is you can get a panic debuff or something. That’d be a fun menu to mess with. Sorta a sub-behavior menu? Idk.

Also immune system. I’d love to mess around with that menu. Hehehe the damage I’d do to bacteria.

I’m most excited to see auto evo at its finest. creating thousands of animals and plants. this could even prove the macro evolution is possible. think of the scientific boundaries this could break!

Prove that macro evolution is possible? What does that mean? Also, break what scientific boundaries?

it can only do as much as its program allows, though.

I’m quite sure it is already proved.

well it will prove it double i guess. to all the dumb dumb conspiracy theorist.

How would a species that releases thousands of eggs into the wild only a few of which are expected to survive work? Dying again and again would not be fun to play, but there is no reason to ban such a reproduction model if a player wants to pursue it. Maybe the start location can always be extremely lucky or the player can restart as a 2 day old after dying as a 3 day old. What do you think?

There is a similar thread about alternate reproduction types, and when you would enter the editor. I hope this helps!

Reproduction and when to enter the editor Multicellular Stage

Atm, thrive only has a cell stage. You gather enough resources to split your cell, and enter the editor immediately upon doing so. If you die before splitting, your pop goes down and you try again. If your pop runs out, you go extinct. This is fairly simple, and works rather well for cellular reproduction. Though, there is a minor misunderstanding among some players, who don’t realize the split happens when they hit the editor, as evidenced by multiple people asking in the discord why their ce…

So since this is the Aware Stage Ideas thread, I’m going to post an idea for how the editor in Awakening could work.

Essentially, in multicellular stage, there’s talk of splitting the editor into 3 layers. Which represent the three germ layers ectoderm, mesoderm and endoderm. Since organs, muscles, skeletons, and everything else derive from these layers it would make sense to have these. The way I picture it, is that the organism is shown on the right-side of the screen and a series of folders are on the left. Say you want to modify the reproductive system. You would click on the mesoderm and than the urogenital system. This would cause the representation of the organism to grey out, highlighting the urogenital systems.

Since everything is interconnected, a little box would appear with a warning about this. There would be an auto rearrange setting, where as you modify the stated system its connected system would change to accommodate it.

Or it can be done manually with flagged points showing the issue that needs to be corrected to make the organism functional.

Not all animals would have these three layers. Even on Earth there are animals without mesoderm, and others which use these layers in completely different ways

And there could be aliens with a fourth layer

I’m uncertain how a forth layer would work. Though since this would be grounded in what occurs in the multicellular stage, I suppose a simple multicellular organism could evolve 4 four layers. Again not sure how that would work.

I think that progression wise, since the majority of complex animals are tripoblastic, to get to aware stage a multicellular organism would need to acquire three germ layers. 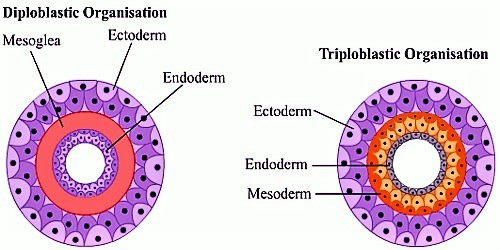 I do not believe it possible for a diploblastic animal to evolve the ability to become terrestrial while still being diploblastic.

There’s no reason why diploblasts couldn’t become more complex. Sure, complex Earth animals have an extra layer, but I don’t see why that is necessary: You can make a lot of crazy organs with just the ectoderm and endoderm, both in diploblasts and triploblasts. And if mesoglea is an issue, just get rid of it and have the two layers stick together

I think we may need to discuss the possibility of civilizations made by small creatures to decide if they are possible or not. I wonder if organisms sized like ants could really reach space stage.

I dident ment have insects i ment live in colonies

There were peaceful-agressive and religious-economic-military sliders in Spore. There can be bio-political sliders in Thrive. Here is an idea for a cooperative-free spirited metric.

Anarchism: People are distributed in the planets surface equally. They only meet in mating season. Everyone is a polymath and they do part time farming part time everthing else. When space stage comes, one manned spaceships exit the planet.

Cultural Unity: People gather around in cities and the actions of many are determined by a common cause (holy book or ideology).

Eusociality: People are biologically required to cooperate. They give up reproducing on their own[1] and everyone specialises at doing a single task like the cells in body becoming parts of different organs.

i think you’re looking for the Awakening or Society Ideas threads, cuz aware is basically the animal stage