Hello, since I did not find any discussions on these or just similar topics, I had questions about some details, and now I will ask them: 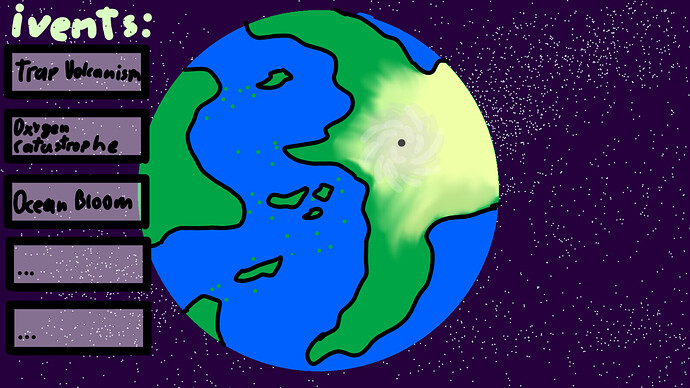 I thought about making even more interface, but changed my mind, because I was already tired of drawing

I would assume yes to the plates, and a definite yes to the sandbox mode. You will beat the game by building or finding an “ascension gate” and turning your civilization into a god. Being a god is the win state and final stage. At that point your beaten save file can affect future save files. This is so far from being implemented it’s not worth talking about though.

At that point your beaten save file can affect future save files.

This is so far from being implemented it’s not worth talking about though.

Totally agree. Though someone might want to implement an “aquarium” mode even for the current stages where you just watch. As it is just an extra thing it won’t be any kind of priority to add to the game.

Totally agree. Though someone might want to implement an “aquarium” mode even for the current stages where you just watch. As it is just an extra thing it won’t be any kind of priority to add to the game.

The idea is not just to observe, but rather that it is a kind of God mode, where you control all life on the planet, by changing the environment in such a way that you get what you need, or ask what you want. what should happen in principle, and either make it so that after a while the game would simply give you the evolutionary history of the biosphere, or make it so that when such an organism appears, the game ends, but the player continues to influence the planet, but, at the same time, that this is far from the first priority, I completely agree.

You just described the grand dreams for the ascension stage, then.

In short, it seems to me that it is time to think about the implementation of lithospheric plates

You are probably about right, but I’d see a static planet generator being implemented first as a more important thing to get planned and done.

both, in fact, are inextricably linked, so I think when the statistics of the planets become dynamic, and not static, it will be necessary to add lithospheric plates as one of the factors.

By the way, do you plan to add a biome generator by chance? Or their appearance over time (due to the development of life, which actively changes its habitat), because, over time, the same coral reefs can form under water or forests (first, of course, swamps) on land?

If you try to design the perfect planet generator in one go, you are very likely to

That’s why I always recommend starting from a simple standpoint (that isn’t too hard to extend in the future). Getting a procedural patch map generator that would be very simple but still make a bunch of different map variations into the game should take only about 30 minutes, but still like multiple years after the basic design having been come up with, we are still struggling to add it because people are trying to design the planet generator first. I might be wrong but I think most players would be very happy to get the basic procedural patch generator into the game soon rather than still wait a long time.

I was obsessed with this tactic. Minimum Viable Product.

MVP is a popular term used by startups. What are they, why do they matter, and how do you test MVPs?

If u want to animate a planet use universe simulators and just record, then edit,