Machine Rebellion - How would it function?

A.I Rebellions have been discussed before, and are most likely going to appear in Thrive. But how would said rebellion function? How would you know one was coming? Which side would the player fight for - their species or their machines? And what would happen after the rebellion? I’m going to propose a few different solutions to these situations here -

Before the Rebellion
If a rebellion were to happen, how would the player know before it happened? And how would it be triggered? The player having sentient robots in their society would be a good starting point, as non-sentient robots wouldn’t be able to truly revolt, as they would only turn hostile if instructed to do, on purpose or mistake, or if used in war (if you disagree with this let me know). The robots would have to have a reason to revolt, of course, like not having proper citizen rights, being discriminated against in society or any other reason. If all of these criteria were met, then the player would need to know in some way that bad things were coming. Maybe robots would go missing, factories would start manufacturing more robots instead of their intended product, robots protesting in cities and other events that would let the player know that they either needed to respect their robots, or prepare for war. Eventually, if these warning signs were left ignored, there could be a point of no return, where the player would know that they could no longer prevent the uprising, and they had to prepare for war, fast.
The Rebellion

The Rebellion has begun! But who’s side does the player take? Their species or their robots? Thrive is a game about evolving and perfecting your species, so the argument could be made that the species is the obvious choice, but the robots, in a way, are the next evolution of your species. Something their created, potentially superior to themselves. So who’s side do you pick? Perhaps something could happen similar to the A.I rebellion in Stellaris. In Stellaris, upon the beginning of the uprising, an event pops up, allowing the player to choose between their empire and the machines. 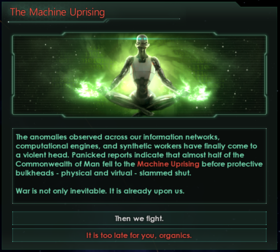 But what would happen if the player picked a side and lost? Maybe they would go back to controlling the other side, but with penalties (as well as the mess the rebellion would have caused), or maybe they would just lose the game, depending on what difficulty was selected.

What would occur after the rebellion had finished? It would depend on the outcome of the rebellion. Perhaps there could be an outcome where both sides come to a peace agreement, giving the robots citizen rights, or freeing them to start their own nation.

What would happen if the species won? As well as all the devestation, robots would likely be outlawed, as well as the species developing a intense hatred and fear of them. This could have an effect in the space stage, if the species were to encounter a robotic species, they could have a relations penalty applied to them because of their fear of all robots.

What would happen if the robots won? Again, perhaps in the space stage, if other species were to discover that they completely annihilated their creator species, they would probably have a big relations penalty applied to them.

If you disagree with anything I said or want to add your own idea, please do!

What would happen if the robots won?

That depends on whose side you picked. If you picked the species, I guess you could somehow lead a resistance against the robocracy just like in XCOM 2, but it’s robots instead of aliens (retarded elders).
1 Like
dan54 March 12, 2022, 12:17pm #3

What would happen if the robots won?

That depends on whose side you picked. If you picked the species, I guess you could somehow lead a resistance against the robocracy just like in XCOM 2, but it’s robots instead of aliens (retarded elders).

I meant what would happen if the robots won specifically if you were playing as them, but I like the idea of a reverse-takeover where the species took back power.