I was attempting to start thrive as I installed it a month or so ago. When starting it up (from the thrive launcher), I was surprised to see that my anti-virus, Avast, marked it as malware and blocked it. 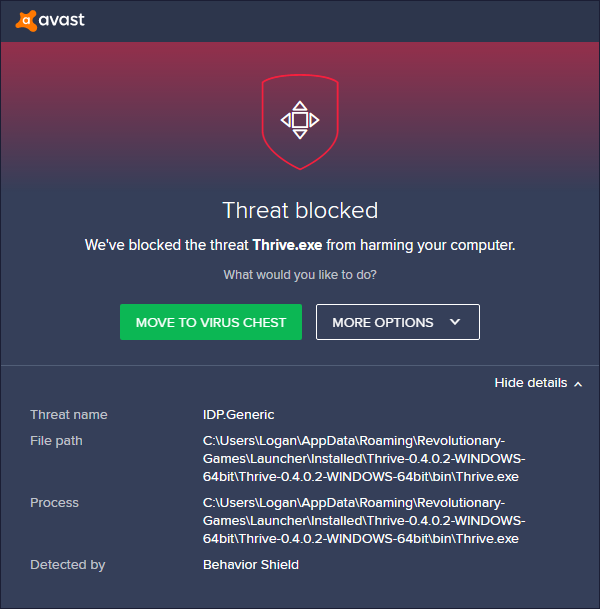 My mistake, after doing some research, I’ve concluded that this was merely a false positive, as Avast has many of these for this specific type of malware.

Avast gets alot of false positives, its just that the game isn’t very popular so they havent added it to their “this unknown program is fine” database. It shoudl give you the option to report it as a false positive, and you can send it to them and they will fix it.
https://www.avast.com/en-us/false-positive-file-form.php

Speaking of which, i really need to find a (hopefully free) antivirus besides the base one you get with windows 10, any suggestions?

I’ve heard that the windows defender in windows 10 is actually quite good and you may not need anything else.

All the free ones that I’ve tried or heard about are complete junk, including avast. So I have only one recommendation, the free version of malware bytes. It just has a manual scan option but it isn’t terrible, at least last time I checked it.

The only antivirus I can really recommend is Norton. I’ve been using it for maybe almost a decade now and I’ve only had a few false positives that were quickly resolved when I submitted samples. And unlike something like Bitdefender that complains about git on windows and prevented me from installing flash, it’s very low maintenance in terms of not having to constantly allow programs to do things.