Based on a recent discussion in the 0.5.2 feedback thread about using real measurements in the game editor I thought it would be useful to create a separate thread for speculating about these.

One thing I immediately find very interesting about the measurements currently in the game is that they don’t seem terribly consistent. To illustrate, I tried to determine the real size of a single hex (from point to point) in the game based on a number of different things:

As you can see it doesn’t appear like a lot of thought went into scaling the different organelles. How could we change that?

IMO: of these scales 0.5 μm per hex (point to point) seems the most sensible. It’s a nice round number, we can assume that, since distances in a cell are rounded to hexes, the smallest bacteria can still be about 0.2 μm long. The nucleus and the chloroplast would have to be scaled up but afaik that’s it.
Using these measurements a hex covers an area of 0.16 square μm. It’s probably simplest to assume that the cell is one hex thick, making its volume 0.08 cubed μm per hex. This means hexes weight slightly less than 0.08 picogram (don’t even know what the abbreviation is for that one).

A major problem with applying real scientific measurements to the microbe stage is that it is 2D. Because of this, things like the square-cube law do not get accurately represented. For example, while our mass is about right for small bacteria, it quickly gets too small for larger cells, because they would realistically be getting thicker as well as longer and wider. One possible fix to this is to assume cells are as thick as they are wide.

Using this information we could go on to calculate stuff like the force of flagella, storage space of vacuoles, or the realistic max speed of a cell, but I’ll leave that up to someone with better googling skills than me. You’re welcome to do it in this thread!

Using this information we could go on to calculate stuff like the force of flagella, storage space of vacuoles, or the realistic max speed of a cell, but I’ll leave that up to someone with better googling skills than me. You’re welcome to do it in this thread!

I think graphics should be prioritize over the realism of measurement, while it be cool for the organelle to be to scaled if that makes it too difficult to see it i think we can fudge a bit to make it clearer for the player

IF. Else, I think the measurement is better for scientific accuracy. It’s all about balancing and finding an equilibrium between the two.
2 Likes
Sentiant October 19, 2020, 10:46am #5

I wanted to come back to this topic because I think it’s important to get the scaling right, and realise how big some stuff is compared to microbes, to make the microbe stage look properly microscopic. To that end I found this image on reddit: 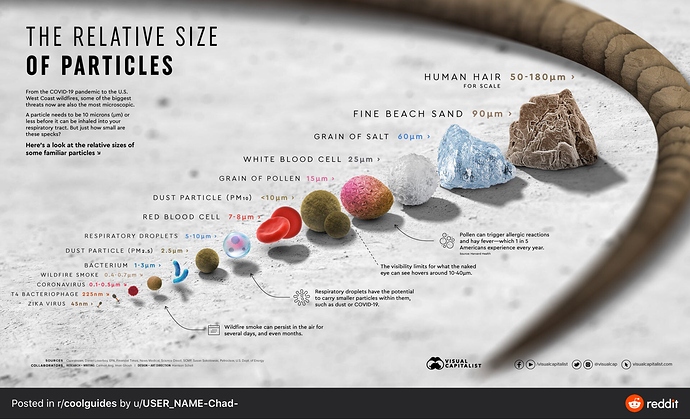 I think some of this stuff would make for good microscenery, in addition to the ice crystals and iron chunks we already have. For example you could find sand grains as obstacles on the ocean floor, or larger smoke particles (about a hex wide) around hydrothermal vents.

Yes! I want more solid objects so much! Yes! Devs! Ahem. The Necromanter has spoken. (Yes, my spooktober pic is a zombie ant.)

I think as far as scaling goes, the game should begin treating small bacteria colonies like clouds once you become full of organelles. It would be easier for a GPU to handle it, like clouds to represent certain simple species, but this would make some of these ‘clouds’ very lethal seeing as they’d be colonies of thousands of cells ‘in-game’.