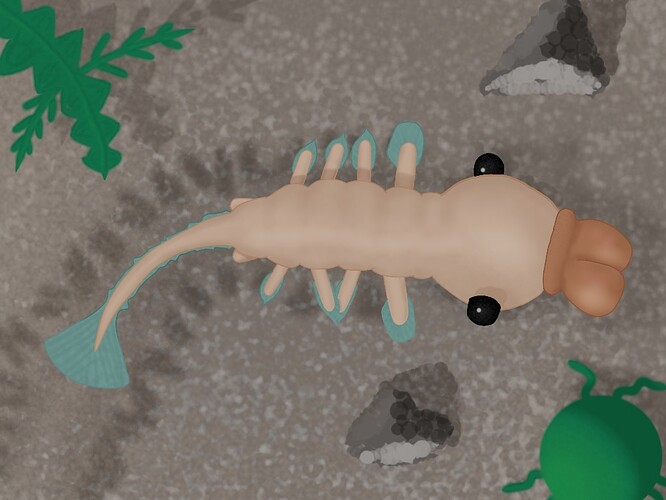 Welcome to the forums!

Hello! Welcome to the forums!

Plants that have natural mirrors attached to them to get enough light.

Volansbullae is a family of xenoplants whose representatives, namely volansbulla viridis, were the first described multicellular life of the gas giant Castor l. Extremely diverse, there are both tiny species with a diameter of 3 millimeters, and giants growing up to 30 meters and accommodating a whole ecosystem of other organisms. They are an important food resource for local life and one of the most common groups of organisms. 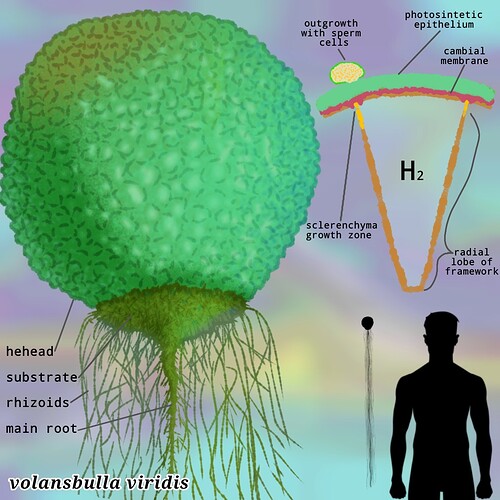 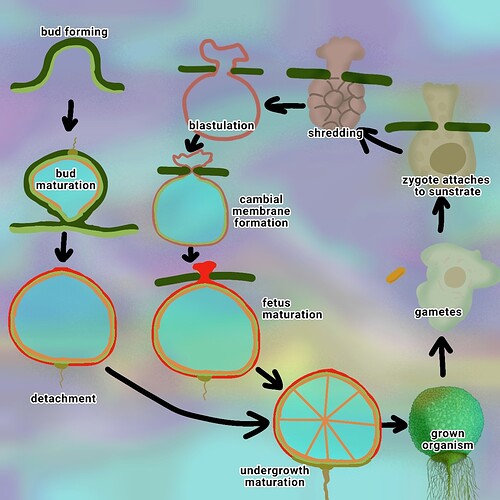 one cool idea i have is animals that eat metals like silver, copper, gold, lead, iron, and platinum to gain electricity but since they get rid of all the oxygen in their bodies before it reaches their blood they have to use wires to discharge the electrons into the ground or an animal. they also have rechargeable batteries that they use to store electricity in case they need to electrocute a predator or prey and they only eat organisms low in metals to get nutrients and not energy.

. Its more about macroscopic organisms

what i said is macroscopic. it has blood to transport metals and blood being used for transportation is almost exclusively a macroscopic trait

I guess I wasn’t clear enough, but 1 percent of the sunlight we recieve on earth wouldn’t be able to support a normal plant, even if it’s giant, but if it used mirrors that aren’t fully made out of cells, and instead are made out of semi-abundant resources, it wouldn’t have to generate ATP to keep the mirrors alive, only enough to keep the small part in the center alive.

Species: Wrekus Buzalus
Nickname: The Wrecking Ball
Diet: Pretty much any organic matter
Habitat: Pretty much anywhere
Appearance: A white bouncing creature with a shell-like eye and spikes and a hole for digestion that can be opened and closed
Biology: Inside is all the stomachs, brains, and organs, when it detects a prey, it bounces, rolls over, and envelopes it, chewing it and sending its parts into its hyper-acidic stomach which gets it digested in a few hours only. The energy goes to strengthening the spikes, mating, making more acid, and movement. Its IQ is medium for a animal, roughly equivalent to a mouse or rabbit. It breathes through tiny holes in scattered areas of its body.
Behavior: Rampages- increased hunting activity and acid production, caused by hunger and starvation
Invasions- The creature sends pheromes to its neighbors, and go in a pack of 4-6, but can go up to 200 sometimes, and migrate across a land, mating, eating, consuming, and displacing other lifeforms, the population rises often by 2-20 per invasion, depending on how much energy they got from the food to make more of themselves
Acid Punch- If the target is a good fighter or is hard, it will shoot out roughly a few liters of acid to digest the prey, while smacking its teeth hard against the target, and if it is anti acid, will coat the target in mucus and rush air in through tiny holes in its mouth, blowing off the anti acidic substances.
Space Sleep- Breathes in a whole lot of oxygen in the course of a few hours, then goes into a ultra-efficient-hibernation-like state and can drift off through space for decades to even on one rare occasion a century, before reaching an alien planet and invading it by colonizing it. If it manages to ride a spaceship, it will, as this is a hardwired instinct evolved over time. If the spaceship crew members do not allow it to ride on, it will expunge acid and water to sabotage the ship, or pick off and get easy kills, until they allow it to ride the spaceship, and if they all do not, the creature simply rides the ship and waits for it to crash land. If the spaceship does not crash land, the creature will attempt to absorb the spaceships energy, and consume all the food in the spaceship, to muster enough energy for about a decade more or so of space sleep.
Nutrient exchange- The creature attaches to another member of its species and exchange nutrients by attaching to each others mouths

Species: Kedioae Harponuz
Nickname: The Kedian Harpooner
Habitat: Invaded earth in a alternate timeline, sent by the alien race of yulkians
Appearance: A light blue 4 legged creature with a circular mouth and 6 eyes, 3 on each side.
Diet: Meat, including human meat, high metabolism, so it must consume 4 human-sized victims a day, or equivalent.
Biology: Contains an alien organ, similiar to a gland, that produces calcium carbonate pellets, produced from the bones of the victims it eats. These pellets are for typically self-defense purposes however, and the real hunting weapon is a hard hollow tube contained in a vast hollow space diverging from the Kedian Harpooner’s esophagus, and when needed will be carried by thousands of tiny arms in the throat, and flap out of the mouth, holding a suction on its target, now available to inject acid, poison, and enzymes at the creature or owner’s will through the tube which is shot out attached to a cord like a harpoon, giving this creature its name. The creature can then feed by sucking the food into its mouth and chewing it, but if too hard can try a nutrient suck. Kedian Harpooners also use their tubes to mate, using ways that are probably obvious and should not be described in too much detail to abide with this forums rules.
Behavior: Most of these behaviors can be controlled at will by it’s biological owner(in this case the yulkians)
Harpoon- literally does what it does described up in the Biology section
Arm dig- Its arms and legs all have cords, and they dig into the being, potentially making a hole or wound making it easier for the main harpoon to slice in and inject loads of acid
Full overdrive dig- The organ that holds all the cords of the harpoons goes into overdrive, resulting in stronger harpoon digs, and there is sufficient energy, and acid and poison flow to the limbs, which now can inject a small amount of acid and poison, although not as much as the main harpoon.
Nutrient suck- The cord organ sends nerve signals causing the main harpoon to suck nutrients, often from blood or liquified parts(liquified usually by acid and enzymes).
Hard hit- Calcium carbonate pellets are sent and shot through the harpoon tube at a whopping speed of 500mph, causing a wound, and when shot, the tube lid almost instantly closes with a hard layer of a bone-like material, preventing a backfire.
Communal firing- Often initiated by yukilian owners, calcium carbonate pellets are shot out in virtual uniform.
Communal suck- Kedian Harpooners team up on a big or tough creature, and attack at once.
Communal exchange- Kedian Harpooners shoot nutrients through the tubes to each other to use, for the greater good and survival of the species.

If you want you can recreate my simple worm like creature 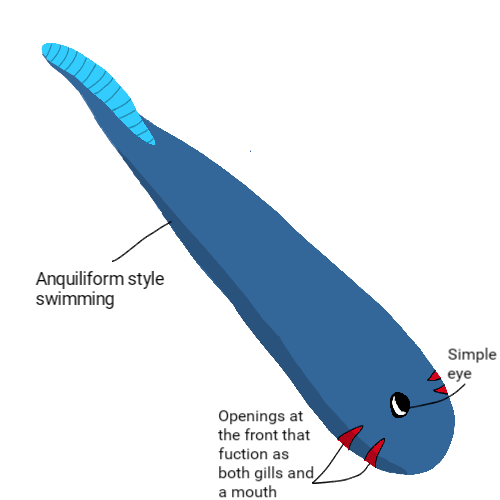