you should stop bombarding him with mentions, he will post the round when he completes writing it.

also i just relised in the last round @NickTheNick said that Lovecin was hunting the glucose.

what did i say now?!

i hope that nickthenick will do more of these with the updated algorithems.

Exactly. Hey, when are you going to post the next round @NickThe…

@TeaKing Thank you for pointing that out. Just so you guys know I definitely haven’t forgotten about this if I haven’t posted in a few days, just been very busy and waiting for some free time to sit down and post the next bit of material. As I post the rounds I’ve been learning new things and applying those to improve the algorithm. I’ll give a summary of these changes soon, since it’s greatly helped for the algorithm’s design.

Here are the performance stats for the first 3 years of the simulation for each species. It’s pretty clear that pretty quickly, even though Locevin was disadvantaged in hunting glucose, the inability of the three predator species to detect Locevin led to their starvation and thus extinction.

Interestingly, over the 100,000 years, Zenius Zoneios lasted the longest before going extinct. It could be the evolution to increase lifespan, since an increase of one month at this point is effectively doubling their lifespans and halving old age death rates.

Feel free to change your mutation point spending based on this info. Otherwise, if you’re all happy with how you’ve spent it, I can post the next round!

I’m not gonna change my spendings, everything seems okay to me, so you can post the next round.

I wanna join to

what am i joining again?

i am going to pm my votes for the next few rounds.

@The_Void Sure I can add you to the waitlist. Read the original post if you want to see what the game is about.

100,000 years have passed since the Great Convertian Extinction, where three species descended from Thrivium Convertium went extinct in an attempt to evolve predation on Locevin. But now a new era dawns on the tidepool of Artemis V, the Purperan Explosion!

All of the multicellular species that had evolved thus far had not been able to break out of the restricting population growth loop they had been stuck in. By coincidence, members of the species in this ecosystem would typically reproduce an average of once per month, but also have an average lifespan of 1 month. Because of this, the population usually only maintained itself or slightly declined, and no species on average was having more births than deaths.

But this changed with the emergence of the Thrivium Purpera species, a new species to branch off of Locevin. A unique mutation in the cells of Thrivium Purpera organisms caused the proteins involved in cell reproduction to bind together faster, better, and more efficiently, leading to increased cell replication rates, and thus overall faster reproduction times for the organism. Suddenly, there was a species that was able to reproduce faster than it would die of old age, and an explosion of population occurred. In this resulting explosion of population for Thrivium Purpera, Locevin and Vermillion went extinct!

The population explosion did not last, however. For the past 300,000 years, glucose clouds had been accumulating in the tidepool since there had only ever been several hundred organisms in the waters to feed on them. With the explosive growth of Purpera, the species’ population eventually reached a point where it was eating more glucose per year than was washing in from the oceans, and within a matter of 3.6 years the glucose reserves in the tidepool dwindled. This caused a huge famine in Purpera’s population, with 72% of the species’ population dying of starvation during the peak month of the famine. Eventually though, the species’ population stabilized with the rate of glucose washing in from the oceans at around 350,000 individuals. 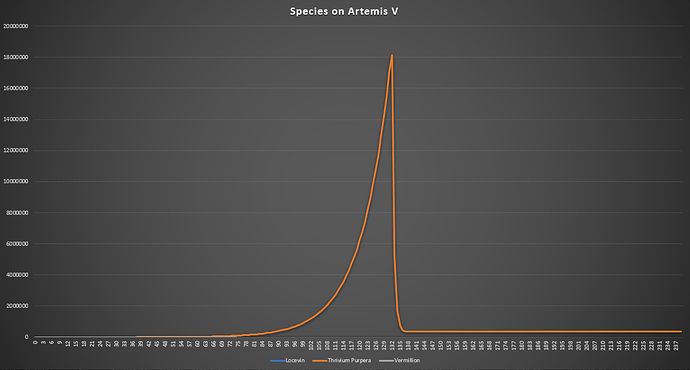 In the first graph, we can’t even see the populations of the other two species. 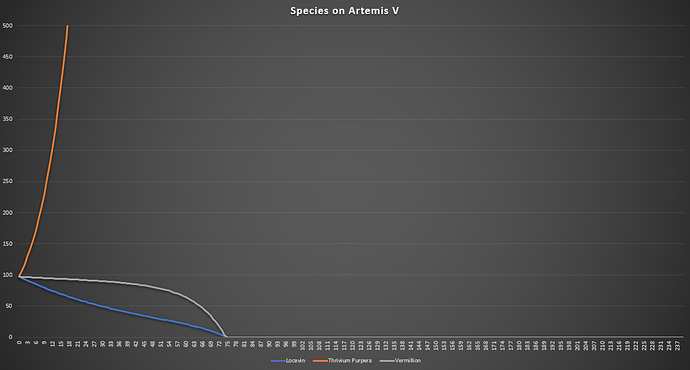 If we cut off the top we can see the extinction of the other two species. Both had disappeared by around the 3 year mark of the simulation.

In the past 100,000 years, the Locevin species evolved several adaptations that made it highly efficient at hunting. It evolved its body away from a cylinder shape into a hydrodynamically designed tear-drop shape, as well as evolving more of its body’s tissues into muscles and evolving a higher endurance for hunting. This all served to make it the most competitive glucose-grazer in the tidepool at the beginning of the 100,000 years, where it was winning 72% of hunts against Thrivium Purpera and Vermillion, with a speed of 24 cm/s (up from 9cm/s). But the advantage that Purpera had was evolving a greater rate of reproduction than death, making it possible for their population to start growing past the plateau of 100 members, while Locevin’s population hovered in the 90s and was steadily decreasing. Eventually, Purpera was able to drive Locevin into extinction via competition through sheer numbers.

As mentioned, the only mutation in Purpera was that of an increased rate of replication of its cells (increasing its mating frequency). But since this made it the only species in the tidepool with a net positive population growth, it caused an explosion in this species’ size until it drove all its competitors to extinction.

While Locevin evolved improved speed, acceleration, and endurance, and Purpera increased its reproduction rate, the Vermillion species had its adaptation occur in its senses. Vermillion is the first species to evolve the ability to detect stimuli from a distance using a new sense called Olfaction (Smell). Using sensitive chemical receptors on its skin, Vermillion was able to smell clouds of glucose in a 20cm radius around its body, instead of having to rely on swimming into them to physically detect them through touch. The only problem here though was that the tidepool was already so full of millions of clouds of glucose, that Vermillion was already detecting all of them through the sense of touch, and adding the sense of smell did not improve its hunting. Add to this the population explosion of Thrivium Purpera, one of Vermillion’s competitors, and we can see why Vermillion went extinct.

In the next part of the round I’ll post other graphs as well as Performance Stats! @J1Sun and @zenzonegaming you are free to now join the game, but you must branch off of Thrivium Purpera.

Thanks for the new round @NickTheNick

mind if i ask you to elaborate on what certain evolutions do? a few of them i feel are a bit vague and its kinda just left to us to infer what they do. Ill just list the ones im quite uncertain of:

Perception,
Range,
Endurance, (the usage of the word prey is confusing me a bit, when you say prey are you also including things like glucose clouds?)

@NickTheNick
Edited my evolutions, just had to make sure you saw.

i will evolve.
endurance 30.
olfaction perception 50.
olfaction range 20.
i hope i don’t die again.
@Deathpacitoast i don’t think you can see glucose.
edit: is it possible to migrate yet @NickTheNick?

mind if i ask you to elaborate on what certain evolutions do? a few of them i feel are a bit vague and its kinda just left to us to infer what they do. Ill just list the ones im quite uncertain of:

Perception,
Range,
Endurance, (the usage of the word prey is confusing me a bit, when you say prey are you also including things like glucose clouds?)

All of these traits are the traits introduced in the original thread that this is spawned from. In case you haven’t read that thread, the ones you mentioned are:
Perception - The strength of a sense (like how good your eyes are)
Range - How far they can sense
Endurance - How long you can move at your top speed while chasing a prey before you tire and give up. This includes glucose clouds but is less relevant since they don’t move. It’s mostly involved with prey that CAN move away from you.

@zenzonegaming Glucose can be seen. For the purposes of the simulation glucose is treated as a species with a 0 camouflage for all senses. Also, there’s no migration currently in the algorithm, so everything will only be in this one patch in this playtest.

@J1Sun If you don’t post your spending soon I’ll have to give your spot to the next person in the waitlist!

BTW, i’m joining the waitlist. i really like this game.

my reaction to @NickTheNick’s newest update on the dev forum

Not sure how to post, so I’ll reply instead. Can I join at some point? I might be a little late, but I’m still interested in helping if I can.

EDIT: Also, what does Clustering do (besides increase self-competition)?

I just realized something. Everyone here was (at least at one point) trying to target and kill TeaKing’s species. Isn’t that a little too aggressive? All it would take would be one good adaptation on TK’s part and the other species would go extinct.
EDIT: Wait, nvm. That already happened. XD
EDIT 2: Moral of the story - don’t rely too much on one species as prey.

First off, posts are replies.

Secondly, don’t double post (even though I’m not the best person to tell ya).

Third, the following quote encouraged me to hunt TeaKing’s species, but now I probably won’t do that again.

Also, as a tip for anyone who plays in this game, do not be afraid to compete with or prey on other players. That’s the whole point of the game! There’s no hard feelings involved, it’s all part of the race for evolution!

But yes, I understand your point.

Of course I understand! I read Nick’s posts! lel

EDIT: Also, I was actually relying on TeaKing’s species, original species and glucose.