So… I was wondering on how to balance the size of the celestial bodies in this game as well as their distances. Too big of a scale (too close to accurate scale) and it will take an incredible amount of time to explore anything. Too small, and everything will be quickly discovered and mostly bland. There is also the thought of how time will work in the game in the first place. I honestly don’t have a problem with accurate scale but I feel thrive won’t be that type of game, and so somewhere in-between will probably be favourable. The problem isn’t that we can’t render planets at these scales on weak computers, with some level of detail techniques I’ve rendered a planet scaled and detailed to the size of earth on my previous potato that couldn’t even run thrive. The problem is mainly the adventure and effort the player will go through to traverse their world. I really think it depends on what the future game will be like to determine this. For something like a Real-time strategy based game a smaller world would probably be better since you are focusing more on gaining material and interacting with other nations. You know, pretty modular as you play as your nation as a whole, so it’d make sense to have you take a big portion of the planet. Then there is the game now where the player is an individual entity and the game is more survival and exploration based. Such a play style would probably promote a bigger planet so the player doesn’t get bored or run out of land to explore and claim as well as marvel at the gigantic scales presented to them. Let us also consider distances. If the game were dealing with a destination to destination setting with no tasks or cool things to do in-between, I think shorter astronomical distances will be in favour so the player doesn’t get bored within missions. For something like a space sim where you can walk around your ship and do scientific missions along the way in a compelling mood, I think a longer distance would be quite worth while (probably not full days and months of course). I don’t really know what choices would be the best in everyone’s mind, so I’m wondering what everyone else thinks. Thanks.
(Ooo, and here’s a pretty planet image to keep you interested) 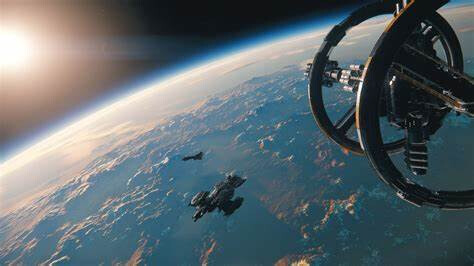 Time skip or fast travel! I mean it’s already a thing since cell stage; you move from one environment to another - which is galactic distances for the microscale. Fast travel can be interrupted by something happening along the journey; or sleeping off some of its time, interrupted when something bad happens.

I suppose this is clever since the game already incorporates it and would probably be easy to recycle. Personally I don’t like this idea, but I guess it is something the devs would lean to. Still doesn’t answer planet size. Are we going to drop planet gen as a whole and just generate “patches”?

Are we going to drop planet gen as a whole and just generate “patches”?

Generate the planet and divide it in patches, you need the entire planet when you are in society and industrial.

No no, that is not what I mean. What @Chlorocyte suggests seems to be that as you progress, the planets behave like individual patches themselves where you fast travel between them instead of actually flying or doing anything.

That’s not what he suggested.

No. I mean fast travel should be an option. Though I guess I should have specified that you can travel to any point in space as you like and not strictly between planets only. I think the entire solar system or perhaps even a galactic quadrant should be a patch, though it’s not like a region of a galaxy is unique from the other until later in the stage.

Has there been a suggestion to subdivide the Space stage?

Has there been a suggestion to subdivide the Space stage?

From what I know, no.