It’s not only fish, but video is good.

I don’t think this only applies to the aware stage, but any aquatic organisms in general. Once fluid dynamics are in, the movement system, even for microbes will have to be revamped to introduce drag, current, turbulence, and just pure pushing off of fluids. There will probably be a distortion system to displace both the membrane, and collider as a softbody. Then this will allow for simulation of creatures pushing against the water, and combined with auto-evo, we should have fish convergent organisms occuring.

The game probably won’t fully simulate fluid dynamics, as this would be way too computationally expensive. I believe the current plan is to simply compare the player’s creature with a bunch of preset shapes, and then use the drag coefficient of the shape the creature resembles most. There’s a thread about it on the dev forum.

Fluid dynamics isn’t excessive as long as you are only basing the simple rules fluids follow, rather than telling the fluid what to do. Plus, have you seen the function for the membrane to wiggle, like what the hell? The problem is recognizing the properties of fluids, and rules they follow. To make it less computational, we can put boundaries to where the fluids are so it isn’t simulating every fluid on every point in the world. We can also do that to spawning cells, but i’m not sure if that is the case already.

Fluid dynamics isn’t excessive as long as you are only basing the simple rules fluids follow, rather than telling the fluid what to do.

Is it though? What do you mean with ‘telling the fluid what to do’?
The rules fluids follow aren’t simple at all. In fact, not all of them are even known. Turbulence, for instance, is well known as one of the few seemingly ‘normal’ things that scientists cannot explain.

Presumably we’d need some sort of physics based particle system which are notoriously hard to do for computers and almost never used in games for that reason. Most water you see in games is just graphical trickery, not an actual simulation. For reference, truly accurate fluid simulations (the sort of thing scientists and photorealistic animations use) can often take hours to compute even for relatively short animations.

Plus, there’s the question of what we actually would need from a dynamic fluid simulator. I doubt any effort put in to creating a fully fleshed calculation would return any of the gameplay benefits we are looking for, or atleast in a more time-effective manner than simpler alternatives.
We don’t really “need” to simulate how each particle moves in the environment; we basically just need currents in both the air for flying organisms and the oceans for aquatic life. Such things are (relatively) easy to do, enough so to the point that the only thing stopping developers from implementing currents is not a lack of ability to code these currents in, but the lack of an ability to graphically indicate them.

With the new marching squares though, I think calculations in diffusion and fluids would be easier using a sort of isopleth. 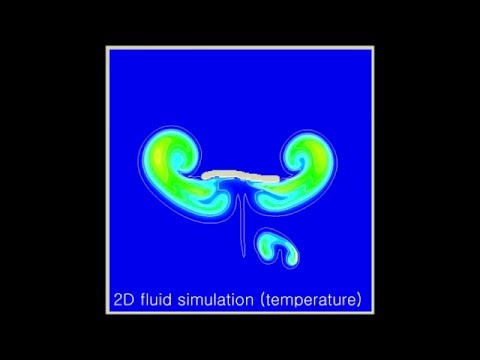 BUT as the first one doesn’t link any code and the second videos’ link is dead (https://github.com/skooter500/Forms ) we would have to code our thing from scratch.

The link is not dead anymore.

I like the idea, @hhyyrylainen(or someone else) could incorporate this into the game, only thing really missing well… is to have more resolution without finding this out when it’s to late and everybody is hyped about the major update:

It would be pretty weird if there were species (fishes) in Thrive that didn’t follow the normal auto-evo process for species evolving, and how other species look in-game.

In seriousness, if size was a factor in speed, would it still be possible to move faster if the fish is small and wiggling extremely fast next to a big fish wiggling slowly?

Size means mass, mass is inverse to speed. This is referenced in the #current-game:microbe-stage , when you add organelles or other stuff that is’nt a flagellum because it increases speed :

your speed will decrease, also what does speed even mean in this context, hexes per second?