References to Maxis in Stargate

This game has references to popular culture such as Hitchhiker’s Guide to the Galaxy, or the series Stargate, where I first saw the concept of ascension. But what is very interesting is when Stargate makes references to Thrive. Or Sim City. It’s how close it can get. 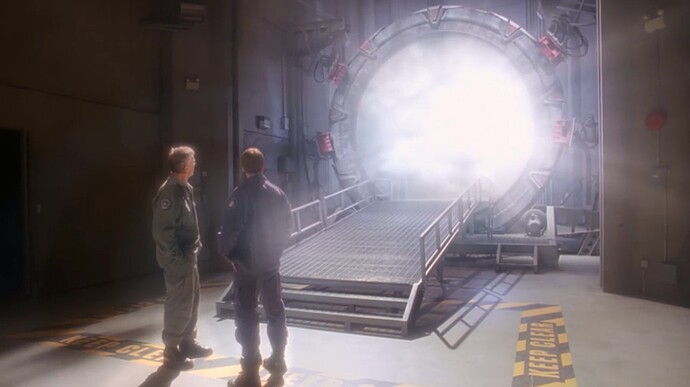 In Stargate Atlantis season three episode 15, two people named Sheppard and McKay discover a new room in the floating city of Atlantis built and abandoned by a species called the Ancients. There they find what looks like a video game where you play the Society Stage and can control everything from the flag of your civ and what your laws are to the water management system and Kim Jong Un approved hairstyles of women. You can even “cheat” and introduce hot air balloons to your medieval peasant society prematurely (I wonder if we will be able to do that after we descend and play Thrive one more time). They later learn that the civs they designed actually exist on a planet in the galaxy (this was a kind of social experiment created by the ancients) and they have to stop a war they caused to begin.

In Stargate Universe season two episodes 17 and 18, the characters on the ship try to open a wormhole to another planet, but the trajectory of the wormhole goes through a solar flare, the system gives an error and the wormhole reconnects to the stargete which it was first dialed from but this time 2.000 years in the past (which I think makes sense, because instantaneous travel could be viewed as the same thing as a light speed travel plus a timetravel to the past). When a version of the team which stayed on current date meets the descendants of the one which travelled to the past (there are also different timelines) they see from the video diaries that the other version of them have found a prospering society. They first built a fence to fend off predators in the their planet full of wildlife. They detect iron hydroxide nearby and decide iron can be the first ore they start making technology with. Then we have a montage of their cities growing, starting with wooden buildings to rising skyscrapers before finally having to be abandoned due to a supervolcano erupting. In the episode, there is even a reference to Maxis games, which you can see here: SimCity | SGCommand | Fandom . Gotta appreciate their wiki editors btw. They even wrote an article for a thing that is only mentioned.

But what is very interesting is when Stargate makes references to Thrive. Or Sim City. It’s how close it can get.

Well that couldn’t have happened because Thrive didn’t exist at the time. It’s more like they explored a concept that applies to Thrive now.

But interesting connections none the less, I certainly didn’t remember that second thing happening, despite having (probably) watched that episode of Universe.

I didn’t give things in chronological order so it might have made the whole thing more different than people tend to remember after some time. They did the time travel in a previous episode in the season which I haven’t rewatched. And time travel probably doesn’t work the way I think it does because it can also go to the future.