I tried to find an existing thread to post this on, but I feel like these thoughts are focused on a different topic than the ones already created and that this topic is significant enough to have its own topic. Take this as my input into that 4.1 topic in the development thread from the perspective of a player; I also notice many of these thoughts are similar to the developers’ posts, so maybe this can be useful or more clarifying input.

This was the first build of Thrive I played. I was tempted to download the 3.4 release, but I felt like it was a better move to wait until this release, as it was promised to be more fun and more balanced. As I was playing, I was trying to completely focus on this stage and fully analyse the gameplay in order to judge it thoroughly as the product was at this moment, without considering what is planned for the future and my optimism and excitement for it, trying to look at the project through the eyes of a player who had no background information about this game - which would be the majority of the internet/people who we will outreach to - and through the eyes of a critique. I believe it is important to approach this game under this philosophy, not only to find ways to maximise the appeal to a broad market for future growth, but to ensure, when the game has multiple stages, that each stage is smoothly connected in both quality and depth.

In general, this build is definitely not bad at all. If I could give it a score from 1-10, it would probably be a 6.5; it is pretty fun and has some depth if played in a certain way, but it lacks the balance and presentation that I think would push it into excellence. Although a bit disorienting at first, once I had a general understanding of how the game worked, I was pretty captivated by the gameplay. I can definitely see the potential this game has moving forward, but there are a few issues it has right now that should be focused on in order to make sure that there is a solid base for Thrive as it evolves.

These are the things that I feel are well-done:

Auto-Evo: Beautifully done and probably the best feature of the game. Considering this is the first version which has this feature, it is already doing wonders, especially with the bacteria. In only about half an hour of gameplay, I’ve seen various distinct tactics, niches, and behaviours develop: I’ve seen small cells who load up on toxins so that they are inedible. I’ve seen small, seemingly transparent bacteria. I’ve seen toxic bacteria which roamed in groups and simultaneously shot toxins at cells. I might have even seen chemotrophic speedy eukaryotes which roam around sulfide clouds and zoom away when their food source is depleted, looking for another cloud to consume. There’s so much potential in this system, and so much complexity that can result from it.

Bacteria: A simple addition adds so much more depth to a game that needed it. Bacteria helps make the game world feel more alive and bountiful.

Things that I feel, if improved, would add that special something to Thrive and would help the game appeal to a wider audience:

Balancing: Probably the biggest issue that plagues Thrive right now. Right now, if a player approached Thrive without a playstyle in mind, they could essentially just collect multiple copies of every organelle within 20 minutes of gameplay and dominate. This, I feel, is exactly what the game should attempt to contain, and while it is true that allot of the most successful organisms on Earth are the most adaptable, this doesn’t mean that those species have the capability to do everything perfectly. We don’t see eukaryotes with 10 mitochondria, 4 toxin vacuoles, 5 chloroplasts, and 7 flagellum zooming around obliterating everything in a petri-dish; we do see those extremes, but it’s almost never found in an all-in-one god cell. Rather, organisms that are adaptable typically depend on a strength that can be applied in various different circumstances. For example, humans aren’t adaptable because we are good at everything; if we tried to fist-fight a lion, outrun a cheetah, or out-macho a honey badger, we would die a brutal death. Rather, our intelligence helps us overcome the challenges we faced in our environment as we developed into a society. Yet another example, dinosaurs, weren’t the fastest, strongest, or smartest organisms when they first showed up in the Triassic. Instead, a few specific and relatively simple adaptations - an extremely efficient respiration process, fast growing rate, and upright posture – helped them occupy various niches with relative success that would eventually lead to a diverse group of organisms and the development into one of the most successful group of animals on Earth, still thriving in the modern era. Instead of enabling a hording of organelles, Thrive should focus on emphasizing some sort of specialization or balancing between organelles; it adds replayability, depth, variety, and realism to the game. I’ve seen the idea of upgradable organelles and adding detrimental effects of organelles being tossed around; maybe this could be a way to answer this problem.

Presentation/Mood: The game definitely isn’t ugly; the new backgrounds are beautiful, and the GUI is sweet and simple. However, it lacks some of the effects which give the whole infinitesimal-cell-in-a-vast-ocean vibe that would contribute to the tone of the game. I feel like updating the presentation of Thrive could really make the game feel so much more wholesome and satisfying to play, as the player would feel like they are immersed in something small yet significant. It is concept art, after all, that gets many people excited about Thrive. These: 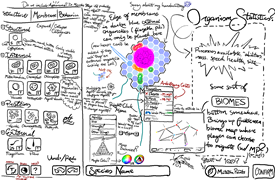 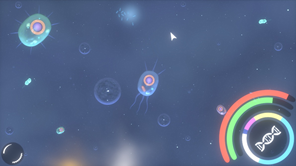 Are beautiful. If Thrive could get to this point, the whole game would change, and while it would take a long time for this level of detail to be reached, I feel like there are small, somewhat simple* changes that could be implemented bit by bit to immensely develop the mood given off by the game. The movement feels somewhat off too; rather than feeling like a cell swimming in a fluid, it feels more like a sac being dragged around by a wire due to how fast the cell can turn and the rapid acceleration and deceleration of the cell. Maybe a simple change in variables, such as turning rate and acceleration, could create a much earthier feel to the movement.

More Tutorials & More Clarification: There are small details lacking in Thrive that I feel like could help make the game much more cohesive. For example, a good addition would be a more understandable cell editor; right now, no one is sure exactly how the cell will look like when finished, nor are they sure which hex is which organelle. Another thing I thought could be more useful would be a clearer indication to what your cell could engulf; sometimes, getting close to an organism and pressing G would be kind of risky or pointless, as it may turn out that they are engulfing me instead or that I couldn’t engulf the organism. A more useful/integrated tutorial could also do wonders, as the current one is simply a wall of text without context. I could understand what to do from this tutorial, but it would have been easier if there was a more interactive one that kind of guided you through the first few minutes of gameplay. Many of these small improvements, I feel, could be identified through playing the game and focusing on what would make small hindrances disappear. A thread in which players could report ideas that could make the game feel much more understandable and accessible could do wonders.

In general, this build is definitely a step in the right direction. With the inclusion of Auto-Evo and bacteria, Thrive is a much better game than it was a few days ago. However, if we want to make Thrive something special and further maximize its potential, we must break down the problems currently facing this build. Looking through the development forum, it looks like many of these concepts have already been discussed in some depth; we are lucky as a community to have an involved development team that dedicates so much to this game, and I am sure that they will one day actualize the dreams we all had about Spore’s cell stage and beyond.

Thanks Deus this is a really helpful breakdown of your experience playing the game.

I agree about trying to see the game through the eyes of someone who hasn’t encountered it before. I think we’ve moved from tech demo into being an unbalanced and shallow game, which is a huge step forwards for the project.

I pretty much agree with all your points. I think the tutorial is something to do last once all the features are in, really with it we should try to give people as few clues as possible so it feels natural to figure it out for themselves. Thrive is a pretty complex game though so I can imagine people needing quite a lot of help.

I also agree re balancing too, both having too many and too few organelles is very viable and that’s going to be one of our main priorities to try and work towards sorting that out. It’s hard because we want to have the flexible cell editor where people can make what they like, but also forces which push people into not having every organelle and having enough. So we’ll see what we can do, it will probably take a few patches of iteration to sort this out.

I’m glad you found use from this.

I agree with you; without a doubt, this new update is the first step towards adding depth in Thrive as it evolves into a noteworthy game, and I am confident in the team’s ability to eventually find that Goldilocks Zone of balance and freedom.