It’s very jarring to me that a game so in-depth as Thrive has the map that it has. Don’t get me wrong, it works and it’s decent enough but I really think making it much harder to get through the areas (Not just mutating) and a lot smoother instead of the click of a button would make the experience much more immersive. (Which I adore, by the way) Maybe making the areas all connected in a big single area would make it better but that’s a huge undertaking. Not really a complaint, just saying it takes me out of the immersion a lot and it could be better.

We’ve discarded the idea that microbes could realistically travel the significant distances required to move patches. In the future if we ever get environmental adaptations, it’ll be anyway impossible for a single cell to move between widely different environmental conditions.

Ohhhh, alright. I never thought of it that way, thanks.

It seems to me that this issue could be solved like this:
After pressing “move to this biome”, we do not move there, but start moving, and, over a number of generations, get to there. With each generation, the background and parameters change smoothly. But then it would make sense to rework this system so that you can move to any biome from any biome.

I think there needs to be a limitation to not have instant teleporting. You can only move to an adjacent biome, though you can create a path to get there. Creating a chain to where you want to go while experiencing game play. Which means you can die while traveling there.

If you die, you just continue on to another cell, sort of

Well yeah, I understand that. But I just don’t like the idea of teleporting between biomes but have some sort of process the player can input that leads to the player’s microbes’ population migrating to that preferred biome over time as they play.

You are not teleporting between biomes, it is you joining the game after 100 million years of migration, would you like to wait that much in game to actually migrate?

It feels like that, I’d prefer to play the game, with a gameplay arrow point in the direction of the preferred biome. Every time you reproduce, you’d find yourself and your population much closer to your preferred biome simulating the migration over generations. I feel this would be a better in game way to move from one biome to another. I think it would take like 1 - 2 reproductions to migrate to an adjacent biome 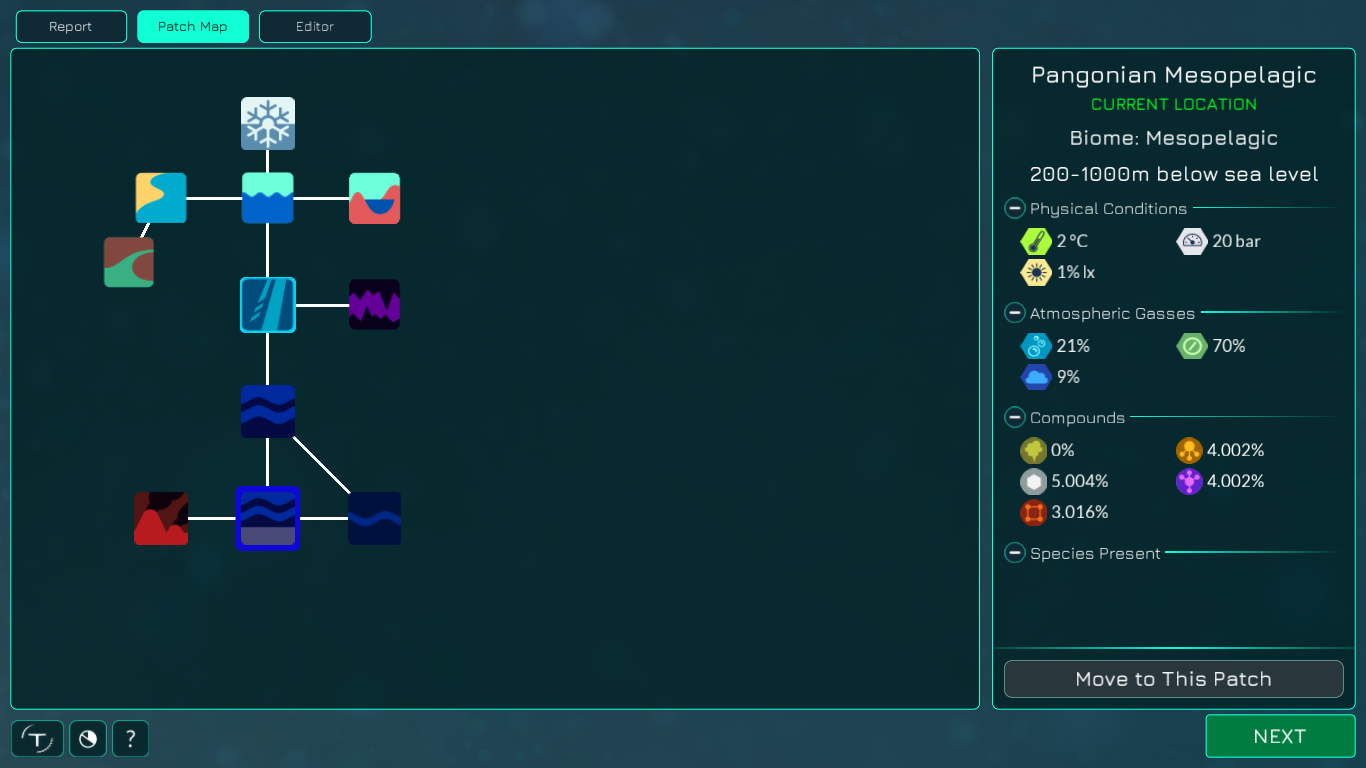 As shown by this picture provided it appears. If it doesn’t heres the link to Microbe Editor which shows the picture of the patch map.

Essentially you’d have to reproduce at least once after a little bit of game play to move to an adjacent patch. Which is due to an arbitrary “migration timer”. Once the timer ends, you can reproduce again to move to the next adjacent biome patch in the migration path. With having to continue this until you get to your preferred habitat. If you die while playing than you need to adjust your cell to the local environment, which resets the cool down timer. Once the timer ends you can reproduce and move to the next biome.

You can set up a migration route, which will automatically move you to the next patch rather than doing it manually every time you enter editor. Technically there would be boundary “patches” which have characteristics of the current biome and the next one. Essentially there’s the possibility that while using the migration route you can spawn extremely close to the next biome patch on the route and could cross the boarder. Which would be shown via the changes in the background. Boundary patches would be a unique cross between the two patches that arise as you cross over. With a pop up saying that you just crossed over from biome patch A into biome patch B when this happens.

I also think there should be more biome patches. With a sea bed version of each of the oceanic zones. So Sea bed abyssal - bathypelagic. Coastal can be considered the benthic version of epipelagic zone. I would also add a Hadal Cold Seep biome patch. Which would be the deepest point you could go. As wells as a shallow-sea hydrothermal vent biome, which could be considered to be near a subsurface volcano. Since there are some hydrothermal vents found near the surface due to such geological formations.

So in regards to my previous post, here’s a picture of the additions I added to the patch map via a mock up. 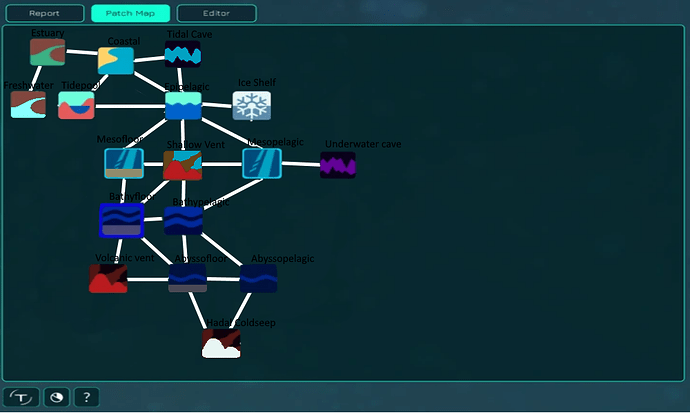 Thrive patch map mock 11000×600 138 KB
I went into the wiki copied the patch map and than added the patches I felt were lacking. Each patch of sea floor would have a different composition of compounds. With the shallow vent providing similar compounds to the volcanic vent, but offering light as well. Allowing for the diversification of thermaltrophs, autotrophs, chemotrophs and other types of microbes within this environment. Tidal caves would offer different compound composition to under water caves, while also offering light.

The Hadal coldseep would offer one of the most concentrated sources of hydrogen sulfide in comparison to volcanic and shallow vents. But being the deepest region one can reach, it would have the most pressure.

For freshwater, salt would probably need to be implemented to keep track of saltine levels.

I honestly don’t mind “teleporting” considering that each generation is supposed to be a hundred million years. You get a snapshot of life in one area, an imaginary narrator says “Some time passed, and eventually…” and then you jump into a snapshot of a new area. It doesn’t feel any more “gamey” to me than the rest of the game. It’s the presentation that matters more.

In fact, I actually think more should be done to convey that each generation is a new life in a era. hhyyrylainen said in another thread that resource clouds persisting through generations is meant to give continuity between generations, but that, combined with the fact that my resource deficits carry over, makes it feel less like I’m playing a descendant of an earlier microbe and more like I just edited my microbe in some sort of microbe editor. It actually kind of breaks immersion for me.

I think a splash screen that shows time passing and biomes changing after exiting the editor would look nice. I’m imaging a staggered fade between the background layers of each biome. Something like this:

My post wasn’t directed at you specifically. Actually, I really liked your patch map.

Oh, thank you about the patch map. Any suggestions/critiques about the configuration? I really couldn’t think of any additional patches that could be different in terms of light, temperature, and chemical make up.

That works to show the current year, important for the auto-evo and progress report I realize, but I don’t think it communicates the passage of time and the scale well enough.

The date on the summary screen is big and obvious, but it doesn’t do a new player any good unless they remember what the last date was, which I think is unlikely given how much other information is also thrown at them on that screen. Staggering it makes it more digestible.

Honestly, that, combined with the persistent resource clouds, sometimes made me wonder if time actually was supposed to be passing between every generation before I made a conscious effort to keep track.

Very possible. However, I do know that I’m not the only person who has glanced at a clock and moments later realized that he doesn’t actually know what time it is. Often, just seeing the information isn’t enough. You need to be primed to understand its significance or there’s a good chance you will immediately forget it.

Showing the year and location after leaving the editor (not necessarily instead of entering) communicates very clearly that time is important. It also gives the impression that you have been traveling and adapting for 100 million years, rather than that you spent 100 million years in one place and then suddenly morphed and appeared in another. ImmersionTM

(I realize that this is probably one of the least important things you could be working on right now. This is just my take on it.)

Oh, thank you about the patch map. Any suggestions/critiques about the configuration? I really couldn’t think of any additional patches that could be different in terms of light, temperature, and chemical make up.

Nothing in particular, other than the fact that each area deserves a unique icon.

I have no relevant qualifications, so you won’t get much critique regarding realism from me. I do love the inclusion of the cold seep – I can’t believe it took me until I played Subnautica to learn about brine rivers. Although, would it make more sense for the volcanic vent to be surrounded by abyss, or is it supposed to connect to the bathypelagic floor?

My only real concern is making sure each area is fun and feels unique, which you already acknowledged. I assume the sea floor in the current game will be fleshed out at some point, and it’ll be interesting to see if floor-exclusive features can interact with the the pelagic zones to form a big benthic chain like you have here, but it might still be tough to make each one worth playing. If the bathypelagic forever remains just a bridge between more interesting zones, it probably won’t need its own version of the sea floor. (That’s a separate issue, though.)

I might have organized the chart so that the pelagic zones form straight columns to the surface, but that’s just a stylistic thing.

I already said that you will move to the biome for a couple of dozen generations, what is the claim to me about your dislike for the “idea of ​​teleporting between biomes” (quote) ???

I’ll be honest its been awhile since I played Thrive. I turned the game on and found I had no basis to what I was saying. I also remembered why I hadn’t played in a while, I suck at the game.

From what I’ve seen the Volcanic vent looks to be attached to the Abyssopelagic floor. It just doesn’t show the colors because of the compounds released into the surrounding area changes the color of the water. It also looks like its surrounded by rock making it an enclosed space.

So with the way maps are now generated part of my idea in regards to expanding the map is obsolete. However, I do believe that adding additional patches for different conditions should be implemented.

The procedural creation of different patch maps means links and environments can be more versatile in game play. Being used to build a foundation of the world for later stages.

Simply put I think we need more diversity in patches and that if it was implemented into the way procedural patch maps work gameplay would become even more enjoyable.