resources in this game are just cartoonishly hard to find. i swear, you can pick a direction and just move for like, 10 minutes, and not bump into a SINGLE bit of glucose. Unless you’re an algae or predator, you will likely spend most of the game scraping by off the thin remains of half eaten dead cells. 99% of my deaths are caused by unfair resource spawn mechanics. if any devs are reading this and can find it in your heart to make the spawn mechanics a little less ass-backwards, my and probably many other’s gratitude would be endless.

Glucose decreases after each evolution, so if you don’t find an alternative way to produce ATP you’ll be in for a hard time

How far into the game are you? Glucose reduces each generation, so by like generation 20 it is going to become seriously scarce. The intention is to simulate the primordial soup having been consumed and all species needing to move onto another energy source and not rely on the basic glucose finding strategy.

If you want to live off of glucose stay in the vents and don’t play very long. Sorry that the game is challenging.

Idea: We add a dr_wumblerbump mode where resources are unrealistically easy to find!

…that was a joke, but yeah glucose decreases each generation so you cant just survive off free floating glucose. Phosphate is actually super rare IRL, so thats pretty realistic actually. 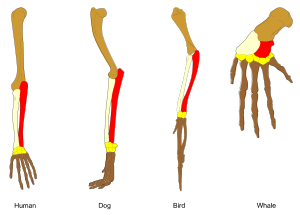 Homologous bones in the limbs of tetrapods. The bones of these animals have the same basic structure, but have been adapted for specific uses.

Adaptation is the process that makes organisms better suited to their habitat.[190][191] Also, the term adaptation may refer to a trait that is important for an organism’s survival. For example, the adaptation of horses’ teeth to the grinding of grass. By using the term adaptation for the evolutionary process and adaptive trait for the product (the bodily part or function), the two senses of the word may be distinguished. Adaptations are produced by natural selection.[192] The following definitions are due to Theodosius Dobzhansky:

Adaptation may cause either the gain of a new feature, or the loss of an ancestral feature. An example that shows both types of change is bacterial adaptation to antibiotic selection, with genetic changes causing antibiotic resistance by both modifying the target of the drug, or increasing the activity of transporters that pump the drug out of the cell.[196] Other striking examples are the bacteria Escherichia coli evolving the ability to use citric acid as a nutrient in a long-term laboratory experiment,[197] Flavobacterium evolving a novel enzyme that allows these bacteria to grow on the by-products of nylon manufacturing,[198][199] and the soil bacterium Sphingobium evolving an entirely new metabolic pathway that degrades the synthetic pesticide pentachlorophenol.[200][201] An interesting but still controversial idea is that some adaptations might increase the ability of organisms to generate genetic diversity and adapt by natural selection (increasing organisms’ evolvability).[202][203][204][205][206][excessive citations]

A baleen whale skeleton. Letters a and b label flipper bones, which were adapted from front leg bones, while c indicates vestigial leg bones, both suggesting an adaptation from land to sea.[207]

Adaptation occurs through the gradual modification of existing structures. Consequently, structures with similar internal organisation may have different functions in related organisms. This is the result of a single ancestral structure being adapted to function in different ways. The bones within bat wings, for example, are very similar to those in mice feet and primate hands, due to the descent of all these structures from a common mammalian ancestor.[208] However, since all living organisms are related to some extent,[209] even organs that appear to have little or no structural similarity, such as arthropod, squid and vertebrate eyes, or the limbs and wings of arthropods and vertebrates, can depend on a common set of homologous genes that control their assembly and function; this is called deep homology.[210][211]

During evolution, some structures may lose their original function and become vestigial structures.[212] Such structures may have little or no function in a current species, yet have a clear function in ancestral species, or other closely related species. Examples include pseudogenes,[213] the non-functional remains of eyes in blind cave-dwelling fish,[214] wings in flightless birds,[215] the presence of hip bones in whales and snakes,[207] and sexual traits in organisms that reproduce via asexual reproduction.[216] Examples of vestigial structures in humans include wisdom teeth,[217] the coccyx,[212] the vermiform appendix,[212] and other behavioural vestiges such as goose bumps[218][219] and primitive reflexes.[220][221][222]

However, many traits that appear to be simple adaptations are in fact exaptations: structures originally adapted for one function, but which coincidentally became somewhat useful for some other function in the process.[223] One example is the African lizard Holaspis guentheri, which developed an extremely flat head for hiding in crevices, as can be seen by looking at its near relatives. However, in this species, the head has become so flattened that it assists in gliding from tree to tree—an exaptation.[223] Within cells, molecular machines such as the bacterial flagella[224] and protein sorting machinery[225] evolved by the recruitment of several pre-existing proteins that previously had different functions.[175] Another example is the recruitment of enzymes from glycolysis and xenobiotic metabolism to serve as structural proteins called crystallins within the lenses of organisms’ eyes.[226][227]

An area of current investigation in evolutionary developmental biology is the developmental basis of adaptations and exaptations.[228] This research addresses the origin and evolution of embryonic development and how modifications of development and developmental processes produce novel features.[229] These studies have shown that evolution can alter development to produce new structures, such as embryonic bone structures that develop into the jaw in other animals instead forming part of the middle ear in mammals.[230] It is also possible for structures that have been lost in evolution to reappear due to changes in developmental genes, such as a mutation in chickens causing embryos to grow teeth similar to those of crocodiles.[231] It is now becoming clear that most alterations in the form of organisms are due to changes in a small set of conserved genes.[232]

Not OP, but I’ve had this issue from the very start.
Many times when I spawn in a new world, I won’t encounter glucose.

just spin around in a circle, compounds dont spawn immediately

ok funnyballs, what i’m trying to say is that resources are way more scarce than they need to be, even early game. i feel like that should be obvious.

at the time of writing this i was at like, 3 gens in. not fun.

Try scrolling out to see more, and uh, getting gud.

On a more serious note, it might be a good idea to add a Chemoreceptor early on, which you can then fine tune to what compound you require, like Glucose.
Chemoreceptors are relatively cheap and should allow you to still add one or two more things to your cell before moving on into the next generation, and only one should be required unless you’re on the hunt for more than one compound.

There definitely are some quirks to the compound spawning system which will need to be ironed out, specifically thinking about how sometimes it feels like the game is deciding not to spawn any compounds while other times it decides there should be 50 compound clouds spawning. I think some variation in this should be warranted so it doesn’t feel like you’re under a microscope with someone giving you every single nutrient you desire on one extreme and a desert on the other extreme, but it makes sense that in nature, there are loud and quiet patches.

That being said, especially if you’re new to Thrive, I wouldn’t base metabolism completely on glucose initially. Try putting the iron proteins down alongside metabolosomes so that your cell energy cost can be sustained by iron. That strategy is pretty useful. And if you don’t like that, you can always just rush to the surface and put a thylakoid on to become a plant.

yeah that’s my main issue with the spawning system. i don’t mind spawns reducing over time or feeding on clouds being relatively unsustainable, but it sometimes feels like the game intentionally tries to starve you to death, especially when there is supposed to be plenty of resources available

More like “getting lucky”. It seems fortunately that the people who have really bad luck and because of that have a bad time are the minority of people.

While there should be decent variability in spawns, I think the fact we’ve had a number of complaints like this suggests there might be too much. The minimum shouldn’t be absolutely nothing. Hopefully we find a way to add a more reliable floor to compound amounts in future.

Oh and for the record, the best way to deal with the existing spawn system is to swim in medium sized circles, i.e. swim far enough away that things despawn, then return so new things respawn.

There is the in progress sector based spawn system but that is such a massive change that getting the code to look good and then getting enough gameplay testing on it is difficult.