Is Thrive going to be on steam when it’s done because i can’t figure out how to activate the launcher and the game keeps crashing on me for some reason then does some updates.

Most likely at some point, but not very soon. There are some issues like how do we set up an organizational for Revolutionary Games in order for it to be the publisher and not one of us developers. In addition to that costing money someone will need to cough up the 100 dollars it costs to release on steam nowadays.

someone will need to cough up the 100 dollars

I thought it has been more expensive, since Valve has removed Steam Greenlight.

AFAIK the price of steam direct is the price for each individual game whereas greenlight allowed you to put as many games as you wanted after one time payment.

Yeah it’s $100 per game now and you can put anything you want on which isn’t offensive.

Hang on, how many active users are there on the forum?

If you’re thinking about crowdfunding the 100 dollars then I think the current number of active users will be outdated by the time the devs would want to put thrive on steam.

hey i was just askin, yeesh

The most users I have seen on the forum at once was about 12, maybe more, maybe less.

I know you are referring to the future but if you look at the current number of @Untrustedlife’s patrons it doesn’t look too good for the community managing to raise even a 100 dollars.

It also means I’ll probably have to get an on campus job during next semester which means development will slow back down to a crawl.

I Sent you a message. Dunno why. Someone would want to harm you but okay lol.

If you were asked to donate money for a Thrive steam release, how much would you give?

Why did you have to create that poll? There is no way in heck we are going to steam in the near future, so if people want to support and actually want to support why not support in the way you can right now?

Because people would know their money is actually going towards something, rather than just ‘supporting’ the game.

You are a member of the dev team now @QuantumCrab you can see that we are doing alot of work. And if they were to do the patreon thing they get access to all the dev builds, so they can see that its going towards something too. 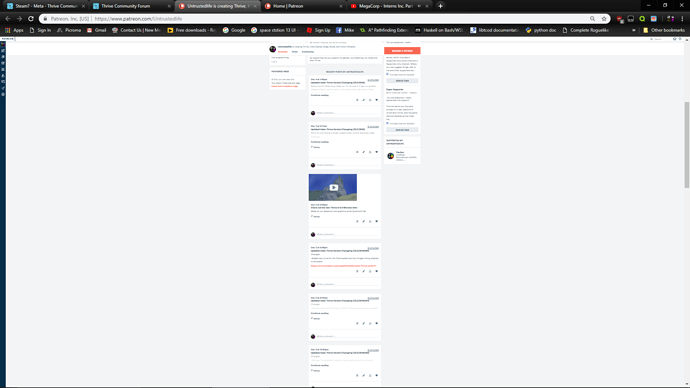 Well we seem to be going perfectly fine without any money