This is just me talking about different concepts for weapons (you may be noticing a trend in my threads). So tentacles would have completely different weapon design from us or other armed creatures right? They wouldn’t make a grips for guns and swords to wrap they tentacle around. I feel they would make weapons in a similar manner to the gauntlet sword. 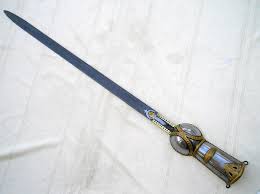 Only theirs would be longer so they can stick the tip of their tentacle in and use them sort of like a spear. For guns it might be similar just instead of a blade it is a laser rifle or something.

I like your idea. I think that the need to adapt technology to your organisms needs should be implemented. But I can think of only two types of grabby bits - hands and tentacles. But still, makes sense.

I might rename this to non-fingered weapons because, what about pincers? A giant crab wouldn’t be able to use human weapons except for melee to an extent. They would need their own kind of grip to use weapons effectively.

Would crab people have to develop weapons? We humans need weapons because we don’t have claws or teeth we can use to attack things. So we need to make spears and stuff to hunt. But if you are a crab you already have your pincers which you can use to kill prey. So maybe they wouldn’t feel a need to develop weapons?

Maybe they have soft shells? I was talking more about weapons for different hand structures than the reasons behind inventing them.

Would crab people have to develop weapons?

Well they have melee sorted out, but what about long-range weapons? They still might want to ’’stab that guy over there’’, but melee isn’t really enough for that.

For long ranged weaponry for crabs, say guns for example, i imagine a glove type thing that goes over one piece of the pincer, and a trigger being pressed/pulled by the other.

Guns don’t exactly work great underwater. And even something like bows, AFAIK, would be quite useless underwater. Only really heavy harpoon-like projectiles would work.

I kinda meant crabs that could possibly live above water, but i see your point.

One question I have about the strategy stages is how should the stats of a city depend on the anatomy of the creatures living there?

So for example two different creature civs (maybe elephant likes and crab likes) build a ship. Would the ship basically end up the same for both of them or would there be fundamental differences?

I can imagine, for example, with mathematics it makes no difference at all who does the thinking, the results should be the same. The area of a circle is the same whether you are a crab person or elephant person.

In my thinking there is no difference (but creatures with tentacles could be wielding multiple weapons) this is mostly just the look of the gun because not everything could use grips made humans. Technically we could get into tools as well but right now I am more interested in weapons.

Tentacle weapons would probably have just longer grips, and pincer weapons could just be extremely ergonomic.

Weird how QuantumCrab didn’t pop up here, seems like his expertise. I for one think grips should be a default type for every appendage and then you can customise the weapon on top of that. Similarly to how real-life grips don’t vary too much so I think that could be a nice work-around.