Welcome to the brand new Thrive Art Competition! There’s been a couple of months hiatus but it’s back!

As you can probably tell, this is a competition…of art…that is generally Thrive related. I’m sure you knew that. Anyway, it’s very simple and few rules. Entrants must upload a piece of artwork they have made and the user with the best artwork wins; their name and art will be light up with glory on Thrive social media. There is no theme, at least not right now, and Thrive covers a large ground so go nuts. (No Cyclids!) Each entrant can only submit one piece, although you can substitute a piece if you want to change your submission later on. The best artwork will be judged by having a poll, but don’t be that guy who votes for himself. You will be disqualified for the month and hit with a fish. Each month the competition will reopen, and you can submit new art. Uh, I think that’s everything you need to know.

p.s. I was joking about the Cylcids. Or was I?

We actually missed the One Year Anniversry of the Thrive Art Competition, but I will set up a special vote to choose the best out of all the winners so far. Exciting stuff. I am also proud to announce that the winner of the January competition was Naggorath! Congratulations if you are on the new forum!

2732×2048
drew this to prove that a furless dog without eyelids can actually be cute.
2 Likes
Svrangite (Ｍ̴͙͔̇͒ｕ̴͐͛̓͠ͅｓ̴̛̮̰̖́̑͆͠ｉ̵͚̤̥̝̬̎͋̊ｃ̸̨̛̦̱̯̽̋͛̍ Ｍ̴ａ̸͙̬̐͌̈̄͌ｎ̸̯́̉̃̌̕ ) March 31, 2018, 11:43pm #4

Yes. As long as it’s yours.
See why I’ll lose yet?

Good luck for anyone participating!

Time to vote for the best art of April! (I know a couple of those weren’t strictly in April but they were only a day out.) Good luck to all three of you!

Don’t forget to make more art for May guys! 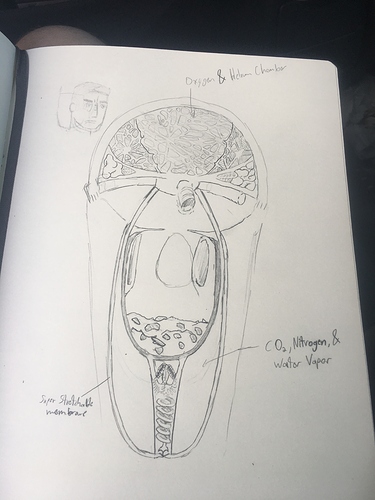 IMG_24253024×4032 1.9 MB
This creature currently has no name I got inspiration from the arrival and I will be using this (get ready for extreme amounts of self shame) for a sci-fi dungeons and dragons game as one of the intelligent races. In the anatomy you can see that heavier gases are kept in the lower inflating chamber and shoot out of the tubes right under its helmet in order to propel itself momentarily. All lighter gases move to inside the helmet to either keep it afloat or provide oxygen to the alveoli like webbing that lines the in side base of its head. This creature orginally came from the water so it had to adjust to the fritter vegetation on land which is why it use gastroliths along with a pumping motion of its stomach to grind the food. Its mouths are located on two of its three legs on the bottom while the third leg is used for picking up rocks, grinding them and using them as gastroliths or absorbing them(like salt). The coil below its lower chambers is the lower digestive tract in which it keeps that shape for 1. More Surface area and 2. stretching as the chambers stretch. On the upper “thighs” of the legs there are clam like mirror eyes(no exact purpose just wanted to do it). And right below the helmet on the inside is the brain. This is around where class ended so I didn’t put the cardiovascular system nervous system or other things. Yes, I put a bit too much thought into this.
1 Like
Askyw (Askyw) July 17, 2018, 1:29am #10

This looks good! You probably should have made a new thread for this though. This thread has been dead for months now.

I might as well contribute to this here is Majesticus unicornea an omnivorous with fused teeth similar to a parrot fish’s teeth being layered and with a set of venomous canines allowing it eat almost anything and a venomous luminescent tail used as a lure. 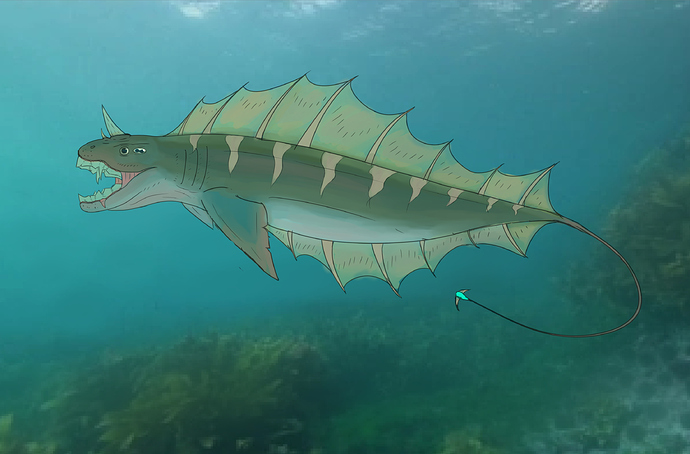 just going to say, that thing couldn’t swim fast if at all. it has less than 1/5 of its main body length as a functional swimming tail and only two primary fins with no secondary fins in the back. basically it needs to have a long tail from where the white gut area is. the tip being a [bio]luminescent lure is perfectly fine but the other segment of it’s tail needs to be longer. the section from the white gut area to the whip-like part needs to be at least double in size

Would make sense since its tail functions as a lure, it can just chill wherever and get food brought to it

fish that use that strategy also normally have high powered suction. otherwise the prey would get away. this fish has no way of producing that suction with it’s jaw type.

ya it pains me to think how this thing swims, the webbing at the back was supposed to be larger but I made them too small and already colored them so I was too lazy to fix it

and the body is a little on the short side