The sea floor and it’s role in the game

The sea floor is not implemented in the game yet, but it is very important for evolution.

First off, the sea floor would start having use as protection from predators. You could go through a small crack that the predator can’t fit through to wait them out. As well as this, small Cyanobacteria could attach to the floor to provide phosphates, that can’t be made by organelles. As a downside, you can’t move so predators can also easily attack you, and other species could attack to compete with you to get phosphates.

Fish also evolved from sea sponges, from something like this: choanofloggates form colonies and become multicellular, and begin forming colonies on the sea floor to make ancestors of sea sponges and starfish, and some sponges keep their larval state into adulthood as a mutation, resembling fish. This gene slowly fills the gene pool due to natural selection, and the fish is born.

How does this idea sound? Tell me your own ideas!

I like the idea, though I’m having a hard time visualizing how this would look in the game. Definitely would open up plenty of opportunity for diversity in the microbe stage!

Can’t wait to live out my dreams of being a sea cow, providing phosphates to the world.

First off, the sea floor would start having use as protection from predators. You could go through a small crack that the predator can’t fit through to wait them out.

Reading this, my initial thought was just to flood the screen with rocks. Sounds like a physics nightmare though.

Then I figured you could just create a landscape of static obstacles. Use a voronoi texture, add a bit of magic, and you get a maze of sand grains. 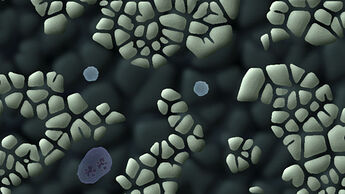 You can make a variety of interesting textures. 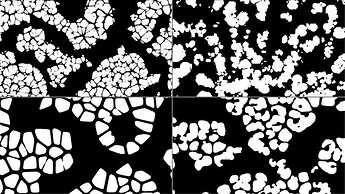 Then I realized that not being able to push things out of the way effectively puts an upper limit on your organism’s size. You could make it a fractal so that there would always be larger and larger corridors for larger organisms, but you could still get stuck if you grew too large without migrating to a larger area. Bad idea.

So, shelving for the moment the idea about hiding in the sediment, what about obtaining phosphates from the mineral suspension?

As well as this, small Cyanobacteria could attach to the floor to provide phosphates, that can’t be made by organelles. 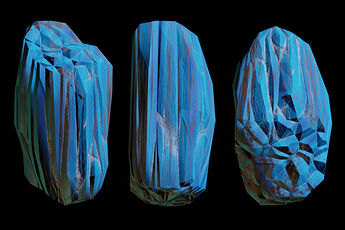 Modeled after a chunk of apatite, a calcium phosphate mineral that releases useable phosphate into soil through weathering. You could use any other phosphorus mineral, though, if this is one looks too blue and chunky.

Anyway, the idea is that, like iron rocks, phosphate rocks would slowly produce turquoise compound clouds. The compound (call it orthophosphate or something) would be converted into useable phosphate by a protein/organelle like this guy: 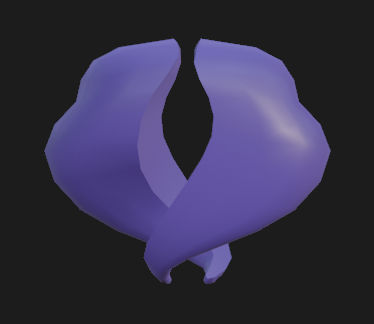 …very loosely modeled after glucose oxidase, a protein some fungi use to convert glucose into gluconic acid which is then used to liberate phosphate from natural sources. The phosphate could then be used by them or anything that eats them.

Here is a very detailed and informative diagram illustrating the whole process.

This, used together with nitrogen fixation, finally gives sessiles a way to evolve without chasing compound clouds!

…if only the sea floor had a form of energy that sessile organisms could use. So… maybe also not a great idea?

Maybe just fill the screen with microbes and say it’s a realistic simulation of a microbial mat. Done and done.

Can’t wait to live out my dreams of being a sea cow, providing phosphates to the world.

Technically we have a sea floor patch, it just doesnt have terrain like it should.
Also there is no way cyano bacteria can survive on the sea floor, unless it is a very shallow sea floor.

Now that you talk about it, why isn’t there a shallow sea floor patch in thrive?

And also, why does the sea floor not have much marine snow if it should be where most of it stops falling?

I guess the coast is effectively a shallow sea floor.

EDIT: I just realized that the light levels in procedural patches actually do depend on how close they are to the surface. How cool is that? 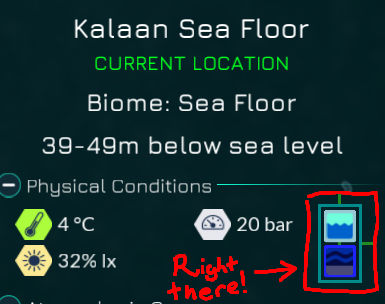 Regarding marine snow: I kind of wanted to suggest that glucose and other resource clouds could spawn at an increased rate on the sea floor depending on the biomass of the patches directly above, but I don’t know how much work this would require to program with the current patch map generator.

EDIT 2: It seems that we already have marine snow, which I did not know. I thought those stray organelles you find floating around were due to some bug, but I guess it makes sense now.

I kind of feel that the sea floor should have different versions of the symbol depending on where it is located. Since the current version is the abyssal waters covered by a grey bar, meant to represent the floor.

Yeah, you made neat mockups in the “Regarding the map” thread. At the time, I didn’t think creating new floor patches was really necessary since all of the environments between vents and surface are pretty same-y, but now that they basically exist anyway, icons would be nice.