Tree of life in Thrive

How will life be categorized in Thrive, something like tree of life? (or will that feature be in the game at all)? (this applies to other stages. as game progresses it would get more complicated)

Categorizing life by Eukaryotes and Prokaryotes

Than Eukaryotes by Plants, Fungi, Animals, Protists and any other kingdom that may arose.

That’s where it gets complicated.

These Kingdoms have dozens of different categories.

Just in Kingdom Animalia, first things that divides animals is, do they have tissues or not.
Than symmetry, and than dozens of different groups.

Will this exist in Thrive?

So I did a little work on this a while ago. I managed to make a reasonable procedural clade diagram.

As one piece of information we will have is the exact decent of every species in the game, we will know the whole tree of life perfectly (unlike biologists who have to try and figure it out).

As for classifying different areas some divisions are easy, like prokaryotes vs eukaryotes and single vs multicellular. However inside these we may split things up in a more arbitrary way. Though I guess when you can see the whole tree of life maybe you don’t need named groups of things, not sure.

Well, will there be divisions that describe certain characteristics of a creature.

(this image explains it the best) 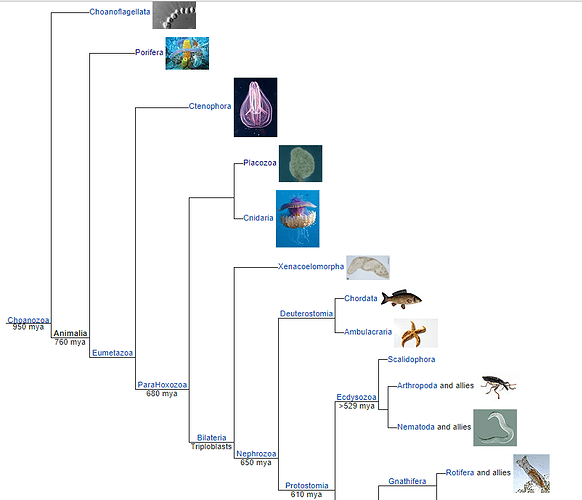 Here is a simple example I made 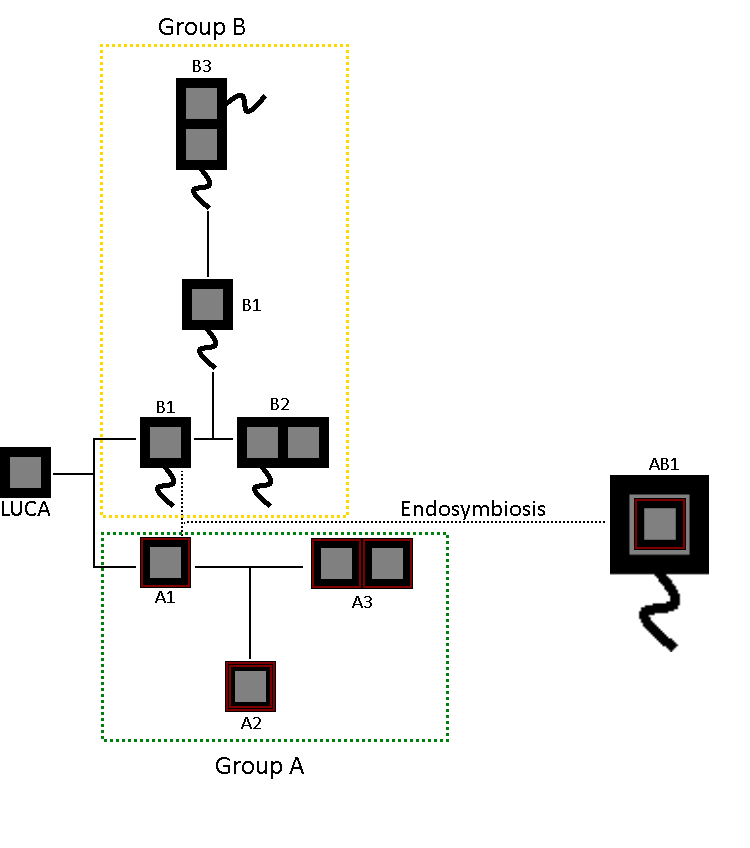 (this is a just quick drawing i made in paint.net that explains the idea)
(there could be further sub-divisions within group A or B, depending on creatures within them)

It’s a bit tricky because how to do you pick which features to divide by? Like if you say “all cells with chloroplasts are in one group” or something then you might find that chloroplasts evolved twice in totally different parts of the tree.

For example on earth flight has evolved 4 different times independently because it is such a good idea (insects, pterosaurs, birds, bats). So if we made a rule that “all things that fly are in the same group” then it would be a pretty weird group, though might make sense I guess.

Not in the sense of “all things that fly are in the same group”.

Insects are part of arthropods. Arthropods, reptiles, birds and mammals had a common ancestor once (which was mostly likely a worm). They share some common things such as, being eukariyotic, multicellular, having nervs etc.

But they aren’t in the same group because they have a lot more of different things about them, even though each of these animal groups developed flight at some point.

So you wouldn’t group them on the basis of flight, but on basis of things such; does it have exoskeleton or not?; what type of blood circulation?, what type of nervus system?

How could you add it in-game?

I don’t think you get how procedural generation works.

On Earth, there is a category of creatures called Arthropoda, that descend from a shared ancestor who had an exoskeleton. But who’s to say that another creature will evolve like that on your planet in Thrive?

I just put Arthropoda as an example. It doesn’t have to be named like that in Thrive, or even exist. (depending on the evolution) 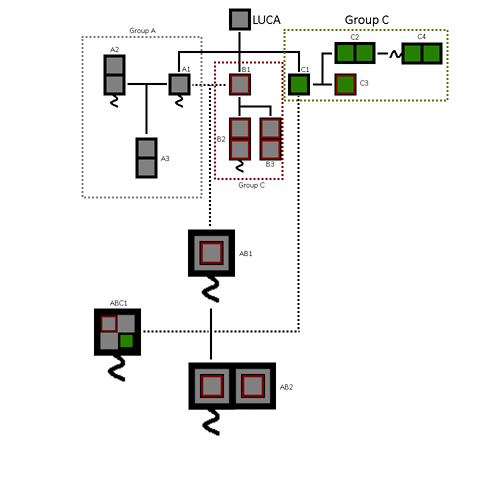 First representative of group A is A1
Like LUCA before it ihas a flexible membrane and it’s an Heterotroph, but unlike LUCA it developed means to move itself. Along the evolution from A1 to A2, a sepreat branch appeared (A3), which had two hexes of cytoplasm but it has lost means to move it self.

First representative of group B is B1
Un-like LUCA before it idoesn’t have a flexible membrane, but it is an Heterotroph. Along the evolution from B1 to B3, a sepreat branch appeared (B2), which had developed means to move itself.

First representative of group C is C1
Like LUCA before it has a flexible membrane, but it is an Autotroph. Branches of Group C have developed means to move them selfs.

Through process of endosymbiosis and separate branch of eukariyotes evolved.

Sorry I misunderstood what you were saying. I guess one way to go about this is to not have the game make distinctions at all, but to just make a diagram showing who evolved from what.

I think that too. It would make it easier for devs to implement and easier for us to understand.

But I still think game should make some basic groups such as animals, fungi, plants and protists. Or even simpler between prokaryotes and eukariyotes

But I still think game should make some basic groups such as animals, fungi, plants and protists.

I think a good distinction would be energy sources/diet (predation, decomposition, iron respiration, photosynthesis, etc) and motility (ability to move). There are plenty of other easily-defined categories that organisms could be classified and sorted upon, like size, mental complexity, or presence of certain structures (vertebrae and amount of limbs are common due to their near-immutability).
These earthly kingdom lines are less clear at a cellular level - dinoflagellates are motile plants with eyespots that sense and move to light. A major theme of Thrive is the fluidity of distinctions/seamless transitions.

For what it’s worth, I hear the traditional, feature-based system of taxonomy isnt used that much by Earth biologists anymore, either. Clades are where it’s at.

I’ve got an idea:

Imagine an evolutionary tree where you can check how the organisms look.

Being able to see how species look in game from the reports has been planned for a long time.

I actually implemented a feature for making images out of cells for use in the early multicellular editor. That same image generation will be usable for showing in the report when someone gets around to working on that.

Since the concepts channel in the Discord server has vanished, might as well put forward my idea for a possible ToL design.

Concept 1 ~
Mostly just a Thrive version of the current ToL I’m working on in GIMP. Its very clustered and busy on the lines, and I could have probably made the text bigger, but you get the main idea.
Also, you’d click on the circles at the end (below 3,300 Myr, or what ever the current year is on your game) and you’d get some info on that species. 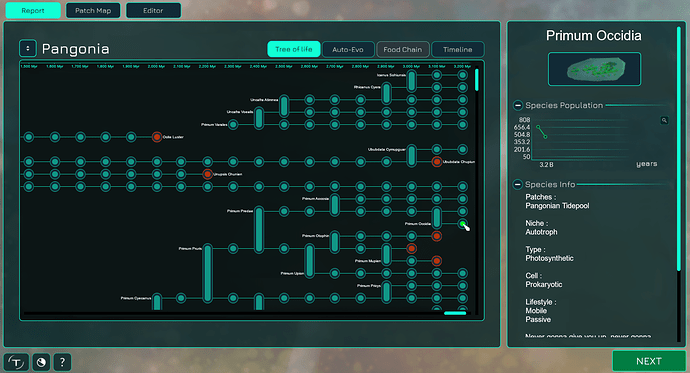 Concept 2 ~
This is just a much cleaner version of Concept one, removing most of the circles and only relegating those to be at the end of the ToL. Everything remains pretty much the same. 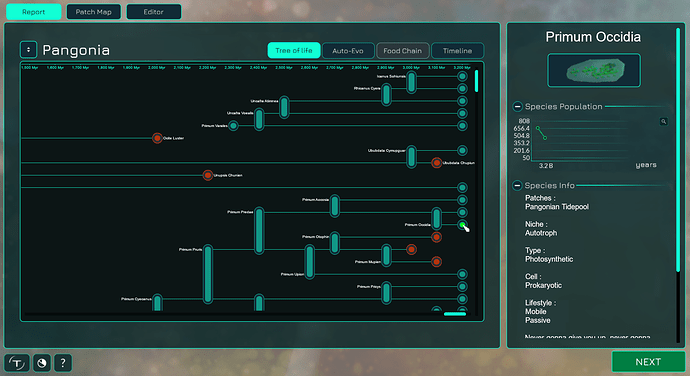 Concept 3 ~
This final concept has the inclusion of thin black liens down the ToL from the dates, which would possibly make it better to see what a certain species split or went extinct. 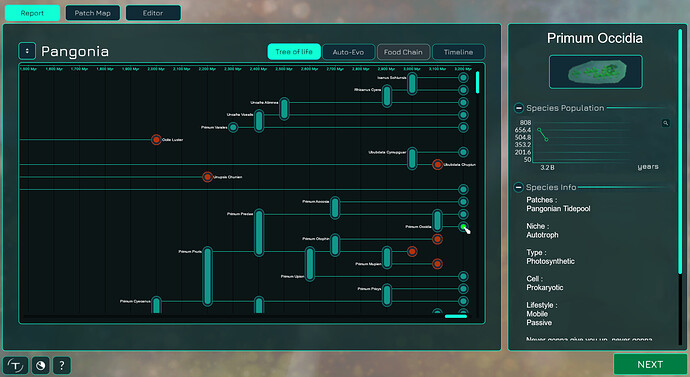 Just some side notes, the dates along the top would understandably be stationary when scrolling up and down, but the dates would move when scrolling left or right.
You could also add the ability to customize your ToL to suit your needs, like different types of trees, an addition of a Geological Timescale (Names of Eras etc. also fully customizable), an option to add or remove the bubble things, so on and so forth.

Amazing concept which has a lot of possibilities in reconstructing phylogeny in Thrive. I wonder how much it can be simplified considering how challenging it is in real life to reconstruct phylogenetic trees of prokaryotes/bacteria due to how quickly they mutate and how simple said mutations are. I’m sure at some point, there would be thousands and thousands of lines.

Concept 1 look better. I wish you can add a hover preview photo on the mouse when it hover on the point.

you can use a TAG system to hide or show relative trees.

Not to mention it can help the player get an idea of what kind of mutations can benefit their ai cells in other regions as well as figuring out more about cells in your current patch as it is hard to study and figure out membrane types while in game since zooming in focuses on the player cell and blurs around the screen edges.