Why do we start as eucaryots? I tought the first form of life that appeared on earth was procaryot.

Essentially, prokaryotic gameplay would be extremely simple. Movement would be mostly done by currents, with flagella or cilia being less useful than its eukaryotic counterparts as they are much smaller.
Eventually, photosynthesis evolves and a bunch of organisms die from oxygenation, and unless your single organelle was the then-useless mitochondria, you lose the game.
Also, we don’t exactly know how eukaryotes evolved from prokaryotes, so it would be a bit safer to stick with an eukaryotic start. The same goes for most organelles, but those could actually be a fun mid-stage thing.

Getting lots of mutations doesn’t seem like a very start-game thing to do, though, and a direct transformation into a eukaryote just doesn’t seem consistent with thrive’s loose categories.

There has been some recent discussion on slack about starting without a nucleus and only access to a few organelles. And the consensus is that it’s a pretty good idea to let the player start off easy. I don’t think this has been fully decided but there’s a good chance that at some point in the future the start will be moved to be a procaryot.

Why not just make the prokaryotic stage part of the tutorial?

I suppose I’ll post a teaser here, we are adding prokaryotes in the next release and they are built so that the player could potentially play as them: 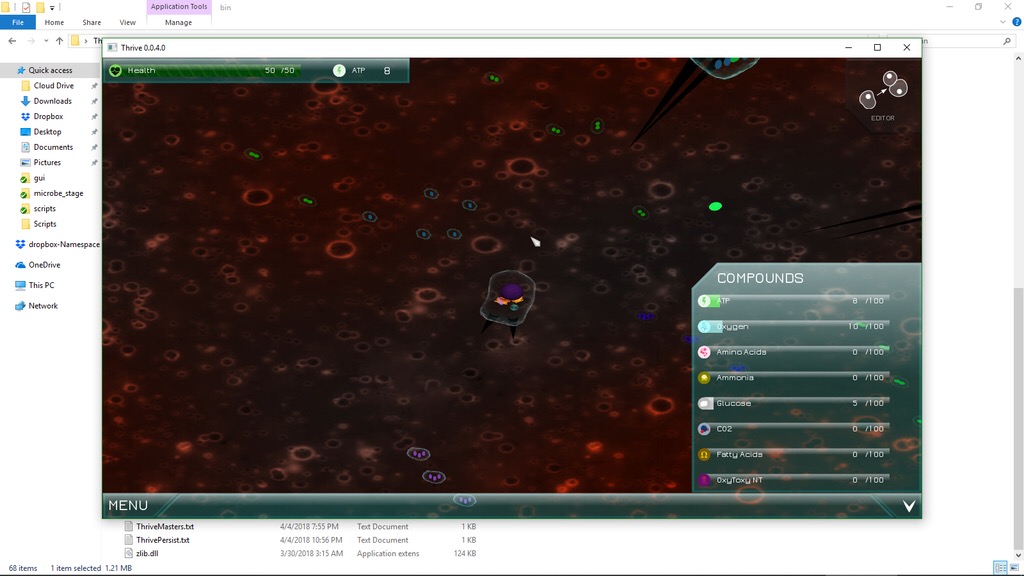 In fact they already have access to 3 special organelles.

They don’t have mitochondria it’s just a placeholder model

Why are the flagella on the cells ENOURMOUS???

I think the animation is what’s causing the issue because it starts off looking fine so I’ll probably just disable the animation until some modeler comes around and fixes it.