Welcome to the planet Teter

Inspired by nintaras forum game - “lets make a planetary ecosystem, species by species” - along with the binge watching of game of thrones and overall just having an interest in world building. i have decided to create my own little eco-system in my own little planet.

down below is just some basic info about the planet and such: i would advise reading it if you would like to understand everything that is going on. 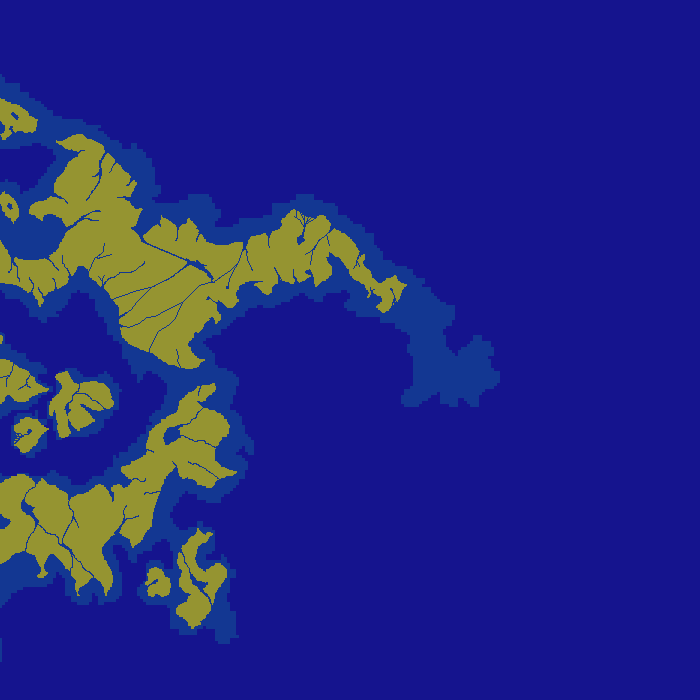 This is an eastern region of the continent merignes. it is dotted with numerous rivers and lakes making it quite a lusheous and diverse location. akin to a rainforest. ill start off by high-lighting a region a species lives in: 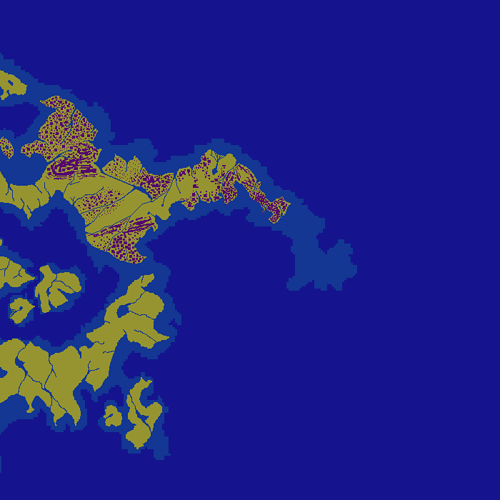 These purple spots are home to an grand species which is slowly going extinct. its name is daemoniorum digitus. coming from latin; daemoniorum (devils) digitus (finger)
devils finger.

The devils finger is a strange organism. it is similar to fungus rather than plants. it stands at around a length of 2 meters, with some of the oldest devil fingers rising up to an astrounding 5 meters. It uses long tendrils undernearth its long body to absorb nutrients from the nutrient rich earth below it. however recent competition from more efficient organisms is forcing the devils finger to adapt and become smaller. It seems that in the merignes. there is no more room for titan fungi. 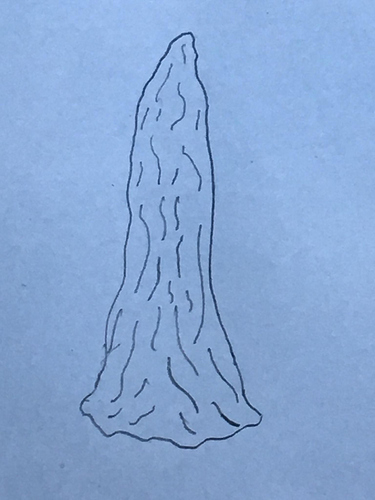 ill add more flora and fauna later on when i feel like it.

The Whip shark comes from the large and diverse family (falpist) that can be found everywhere in teters seas. these organisms are very similar to sharks in body shape. They are one of the more familiar looking creatures that inhabit teters seas.

The Whip Shark seems to roam around the coast of merignes, however it is unknown whether or not these creatures live further along the continent or if this is the only location they live. 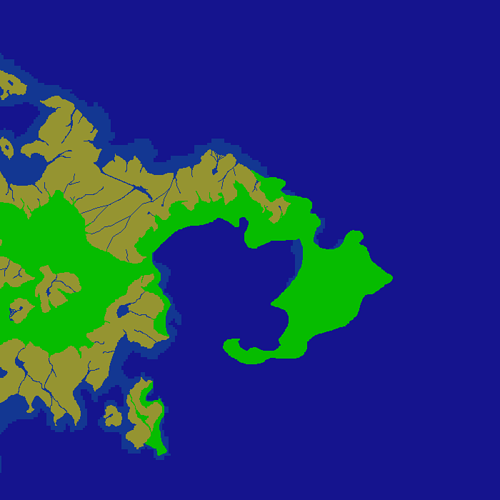 Whip sharks have yet to be seen getting it on. However we do know that they give birth to live young, usually in small litters of 3-5. These babies (commonly refered to as whipples) follow their mother around, feasting on whatever food she is kind enough to spare, and maybe occassionally joining the hunt. this period of their lives lasts about 5 years, after which they set out on their own journeys.

The body shape of Whip sharks is quite similar to that of the thresher shark on earth. they display a grand caudal fin, about one half of its body size. capable of creating great large water waves. and one grand dorsal fin. Their bodys are quite small compared to other species in the Falpist family. and their faces are much flatter than their brethern.

They can grow up to a length of 7.6 meters. with a reported largest length of 8.1 meters.

When it comes to weight, most whip sharks grow up to around 220 kgs. with some more large individuals amassing a weight of 250 kg.

because of their quick lifestyle and relatively small bodys. the whip shark dies at a fairly young age compared to other creatures in teters seas. dying at the age of 25-27 years on average.

usually whip female sharks sexually mature at the age of 5-7 whilst the males mature at 6-8.
females bare litters whenever they can, meaning a female whipshark can potentially produce 20 children in her lifetime.

ill give one when i draw one that im happy with.

The devils hand derives nutrients from dead matter and minerals in the ground. They are unable to photosynthesise as they lack photosynthetic cells.

Due to a lack of resource and competition from much more efficient organisms. this species has been cornered into the a peninsula. It seems that this species is in even more danger of going extinct than its cousin the devils finger. 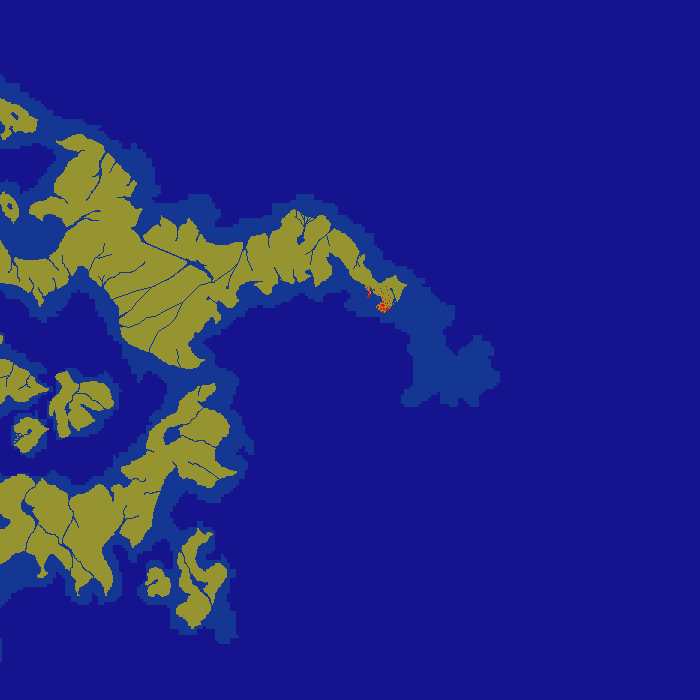 Devils hands, along with devils fingers reproduce by expelling plentiful amounts of tiny spores. These spores do not germinate until certain conditions/criteria are met. and once they do they are extremely vulnerable to animals and the weather.

The body of the Devils hadn is quite similar to that of the Devils finger, except that instead of protruding out of one tip, it splits similarly to cacti into numerous branches. these branches allow them to spread out their spores more evenly. the insides of their bodies are actually not solid, but hollow! making it a habitat for certain species.

They can grow up to a height of 10-13 meters high. with the largest one ever documented reaching a heigh of 15 meters.

despite their size, the devils hand isnt as heavy as you may think it was. its body is mainly comprised of water rather than any organic element like carbon. they weigh a suprising 60-100 kg.

the life span of the devils hand is uncertain. some scientists have speculated that it would survive for 500 years if left untouched. but it has been yet to be confirmed.

the outer body of the devils hand is rather mushroom like in taste, if sliced into mouthsized portions and cooked in some butter and salted. they make for a delectable little fried snack. akin to that of the morel mushroom!

however the interior of the devils hand should be skinned and thrown away.

its not only leathery and dry. once you bite into it, it spills out this strange bitter pus into your mouth. It seems that the giant devil contains small sexual organs inside its interior body.

its getting late ill make one later

Can I try to make an animal??

yknow what, sure go ahead.

habitat: Devil eaters have been spotted nearly anywhere the devils finger has been spotted. 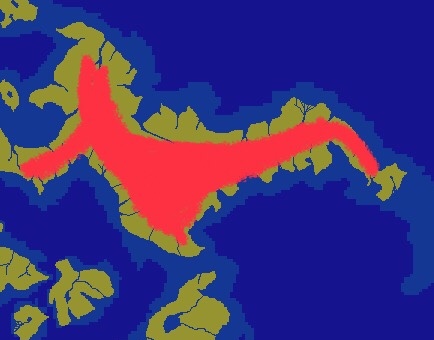 It is not known whether devil eaters have migrated anywhere else. They make there home in hollow devils fingers, with up to five in each plant.

reproduction: Devil eaters reproduce sexually and lay 2-4 eggs at a time. They are mates for life The eggs incubate for 1 month before hatching. After that the babies follow there parents wherever they go for 2 years. They can hunt on their own after 3 months alive, but still stay with their parents. After that they move off to another pack.

biology and physiology: the devil eaters are small reptiles that hunt in packs of 10-30. They have strong tails that are 1.5 times their body weight. Their scales are strong but flexible. They have very sharp fangs in front, but flatter in the back. They are omnivores. They live in nests that are inside devils finger and usually eat devils finger farther away. 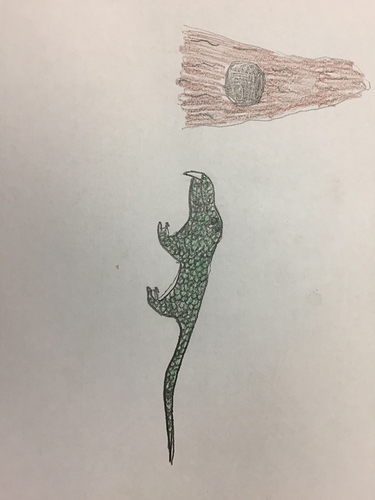 image2448×3264 1.39 MB
they usually grow to a length of 1 meter with the longest recorded being 1.3 meters. Their average weight is 10 kilograms. They live surprisingly long lives for creatures their size at 10-20 years. Females are sexually mature at 3 years, males at 2 years.