What makes a species capable of entering the Awakening Stage?

They could. I honestly just don’t know, some might be smart enough.

As I was reading through the various responses it occurs to me that abstracts concepts or the ability to draw concepts from our environment might be an interesting point to explore, even if it would be hard to define.

On the contrary, dolphins are suspected to have MORE advanced empathetic capabilities than humans, due to the portion of the brain pertaining to it being much bigger and more complex. If I recall, this is also a part related to language, leading people to believe their languages may be more complex as well. Dolphins are, in my opinion, the most clear-cut example of sapience aside from humans.

Corvids also display advanced communication abilities. They speak in different languages and different dialects, and their language is complex enough for them to pass on knowledge to other members without directly showing them the subject. For example, crows are known to describe the physical appearance of humans so their friends/family know who to attack. This is why it’s important you don’t mess with corvids, especially highly social species, because there is a VERY good chance they will make coordinated plans to circumvent you. If you break their nests, they’ll trick you with decoys. If you hurt their family, they’ll make sure you get pecked on sight.

maybe tools made of at least 2 parts connected would let you enter awakening stage? I can’t remind my self non-human species using such a tool.

I agree with @Seranner that dolphins and corvids are probably sapient. But what sets us apart from them? Tool use. Therefore, to enter awakening, one must be able to use tools.

Now we can conclude that what we need to define awakening is figure outwhat intelligence we share with dolphins and crows.

Also we need to figure out level of tool use. Chimps use basic tools such as sticks, but there is still a distinct difference between us and them.

What we share is intelligence, yes, but also community, social learning. Behaviors that are typically deemed features of sapience are seemingly ‘useless’ things functionally such as art, used to convey ideas or things like that. Without at least minimal social learning or communities, things like language and writing would never develop.

I’m not saying every sapient creature must absolutely live in large societies. I am saying that some kind of social interaction, such as hunting strategies and writing taught to children before they go off on their own, or ‘writing boards’ on the edge of territories like the early Southern Gravedigger in Serina.(I know this is speculative, but it gets what I mean across better than I could put into words) The sapients don’t have to have a large, well knit together society (though that helps long term), but some kind of social interaction I think is key.

The transition between could be based on what the creature need to evolve for the gameplay to make sense.

I think a possible good way to think about the transition would be to not think of these two stages as discrete units like the difference between micro and multicellular but a gradient like this: 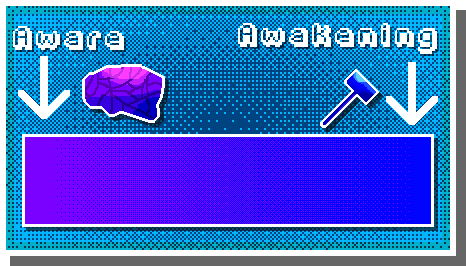 Like I don’t think it matters if a species was ‘sapient’ but could not progress in the awakening stage, it just be a worse aware stage for the player (since they can’t evolve anymore).

Some example I can think of with this idea:

According to the wiki:

This is how you discover technology at least in the early game and so will be important part of the aware stage. So you will need to evolve something to be able to precisely interact with the world like a hand, tentacles , or psychokinesis really good paws. You would probably also need some kind of brain upgrade to make these interaction meaningful, so big enough brain and some kind of personality thing I guess[1]…

Once these are evolved then we are one step closer to the awakening stage and this creature can actually learn stuff from it’s environment and invent some things like tools or murder I guess.

Now this is a certified original brain blast from me but without any type of external record keeping this hypothetical creature will need some way to store memories. It will need to evolve a way to remember things or else It can’t remember it own research/invention; it will keep on reinventing the wheel until the end of time… or when it goes extinct because it made too many wheels and what are you going to do with them, you only need 4 for a cart but it won’t make any because it keep making wheels!

Having any type of memory ‘module’ will allow it to also remember other things like relationships and all that jazz, along with unlocking the research web maybe (but not show it yet)?

Being a lone genius is (jane) good and all but no man is an island and without any kind of way to spread your knowledge, your compatriots are going to be stuck in well… not even the stone age and all that knowledge is going to be lost when you die, so you better evolve something quick.

There is another issue if you can’t teach the other chumps, you can’t spread all your new cool tech to your descendent/children/youngsters and so you going to have to start over and reinvent the wheel every time you pass to a new generation and we already know why that’s a bad idea.

So what’s the magical solution to fix everything[2]!

Well that’s not entirely true, I have 2 ideas on what could be evolved for this:

Though however it is solved, we basically have the start of the awakening stage, and the age of research can start-ish… but it still not the end of evolution!

It be hard to create a galaxy-spanning civilization if you can’t understand your neighbor, and grunts and gestures can only get you so far… unless those gesture are sign language I guess… but we’re not talking about sign language so shhhhhhhh

Language is another thing found in the wiki and allow you to:

The Language invention allows the player to task other members of their species to do specific assignments.

So it seem this whole language thing is not just a passing fad and we need to find a way for our creature to speak French… or whatever kind of animalese it wants.

This probably involve evolving some kind of language center for the brain, what does that mean… who knows. It really depends on how evolution works in the aware stage, is it just get enough synapses to have language, or would we have to create a “language” module.

When this is solved we finally allow our pals to do the work for us, allowing our main dude to take a break. It also allows for cooperation to be discovered which I am not going to talk about because I spent too long on this post (✿◠‿◠)

Other stuff or something… you know?

There probably a lot for other adaption that I am too lazy and not knowledgeable enough to say but hopefully this give some idea on what in the world I am talking about.

Stuff like Cooperation would require your creature to not be entirely selfish and there probably so many other adaptation that is needed to even to start on the start of awakening stuff compared to my very simplified timeline.

I think it be more ‘realistic’ too, since even humans still continued to evolve after we created tools[3] and fire [4] and they seem sapient enough to me. The time scale is long enough between inventions that they were able to evolve between those two time period which we could not replicate if we have a definite end unless the awakening stage had big time warping. [5] [6].

The only problem with this approach that I can currently see is when should evolution end for the player, since there’s not a definite end to settle on and ending it to early could cause player frustration.

So basically instead of having a single sapience trait to evolve, you evolve a bundle of traits that unlock features that gradually unlocks the awakening stage and we could consider that sapience. That way we don’t have to worry what ‘sapience’ is but what a sapient creature would do[7].

Though this kind of just pushes the can down the road, as everything I am saying is just really vague but hopefully someone can do the work for me and figure out all of the vagueness[8]. This should give an alternate perspective on sapience by not talking about it at all lol[9].

@Evolution4Weak I agree that it is a gradient. you mention that player evolution has no definite end. maybe instead of evolving biologically there can be a transition to another type of evolution(culture or pack mentality…) these other forms of evolution still have an indirect impact on you biologically. Much like how your diet can effect your health, shifting the type of evolution might be a better way to view or integrate the later stages of the game. also, behavior characteristics are already in the editor so shifting from biological evolution to a culture/behavior evolution in the later stages might make for easier development.

Well that’s not entirely true, I have 2 ideas on what could be evolved for this:

You dont need any of those things to be capable of learning, learning is dictated by neuronal structure and the fact is that, without learning you couldnt even make a wheel because you wouldnt know how to.

You are talking about teaching

Yeah learning is not the best word to use, and I was going to call this section teaching but it didn’t feel right since teaching brings a very direct vibe like the player has to press a button to directly teach all of his tribe members instead of a more passive “learning”, this was more about information spreading without fully relying on language

Another ability that humans have that I don’t think any animals have is simulation. We can simulate what could happen before we actually experience it. I’m not sure if any other animals have this ability, so it could be promising, HOWEVER, I have no idea if this is implementable

What if it’s an intelligence threshold combined with the ability to change your surroundings dramatically (within your species reference frame) like building a house or wall, and having the ability to form community with you kind.