A more stylized representation of sightless 'vision' in organisms

Okay, so to start off, I want to note that I am EXTREMELY aware of potential design flaws and programming difficulty with my idea. As it stands I know it’s pretty impractical, and maybe people wouldn’t even like it, but I’ve been thinking…
If I’m not mistaken, the top idea for the implementation of sight is that it’ll be like Spore, where you have a small window of vision with a black border until you develop eyes/eyespots.
In my opinion, this looks quite ugly and also just plain unimmersive. After all, your cell is still SEEING, just with a small radius, so is this really developing vision at all? It seems more like you’re just IMPROVING eyesight by getting eyes.

So I was trying to think of a more abstract and aesthetically appealing method of conveying that you’re a blind cell. What if before you can see, your world is visualized as a sort of… void? Not necessarily a black one. I’m not sure what color it would be. But anyways, it’d be a void, and things your cell detects would be visualized as spots of light which are progressively more detailed the better your senses are. When you’re completely blind, it might be something like a blur of light until it touches you, at which point you can make out what kind of cell it exactly is and therefore illuminate its shape. Similarly you would always be able to see your cell in its entirety, but it wouldn’t have visible colors except for whatever color the light is.

Other things will be detected the same way. Things like gas clouds and rocks don’t need a particularly detailed shape to be visualized but they will be visualized better the closer you get and the better your senses get nonetheless. The material they are made of should be displayed through color.

You can improve your ability to detect what type of cell it is through chemoreceptors and eyespots, until eventually you will even be able to see, and the parts you can’t see will be seen through the void still.
The better your cell’s senses, the less blurry the lights it ‘sees’ are until you start gaining proper vision. By the time you’re able to see, probably all cells which you detect without sight will already have a pretty distinct shape in the void.

The better your eyesight gets, the less void will fill the screen until eventually it’s gone. Things like color will also need to be evolved separately.

During macroscopic stage, if you still cannot see, it’ll work more or less the same except with other senses working together to help you understand the world, and things like grounds, walls, and ceilings will illuminate as you get close to them as well.

A sense of smell, if it is good enough, can allow you to visualize objects that you’ve smelled before if you encounter them again, without even needing to get close.

Sound can be used to echolocate and reveal the shape of the world around you without getting close to it. It can also reveal where organisms are due to either them making noise, or you echolocating.

There will be other senses too, goodness knows what else. And they’ll all contribute to either making the void more detailed, or removing the void entirely.

So, I want to specify that again, I do understand this would be extremely hard to program. And it poses problems like… What if people want to be able to properly SEE during the cell stage? Well, I’d just keep it as a setting in that case so they can choose to disable it. But there are other problems too, and I’m aware of it. It would be extremely difficult to play, for one… You’d have to reprogram the AI to act based on this new chemoreceptive ‘vision,’ which would mean a complete overhaul is needed- because if the AI could see and you couldn’t, it would be super unfair.
And I can go on.
This concept isn’t without its flaws, but I think if it’s done right, it could be many things. Immersive. Pleasing to look at. Incentivizes different routes of evolution. More realistic. Better AI. So on and so forth. Here is my concept art.

First, here’s the scenario with full vision. 2 different species of cells. The one with the flagella is the player cell, the others are AI. 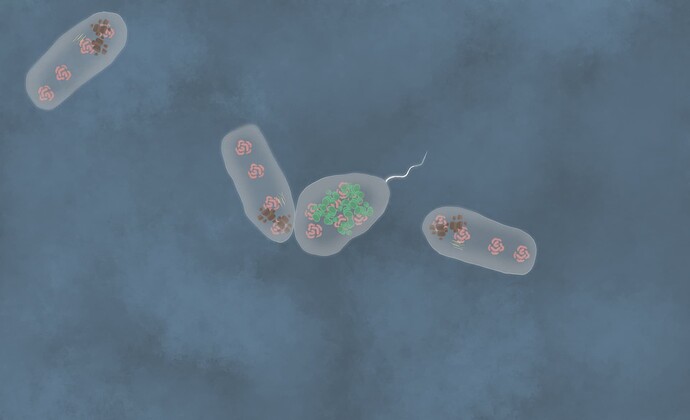 Second, this is a visualization of how this cell, with extremely minimal chemoreceptive abilities, would ‘see’ the world. 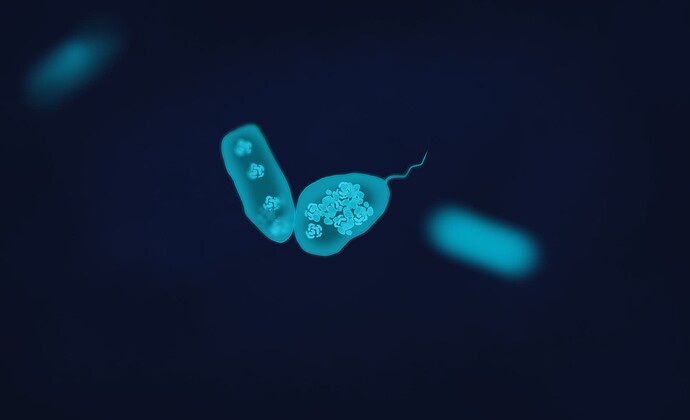 Thrive sight 21920×1170 23.5 KB
As you can see, the furthest cell from the player appears as little more than a blur. Even the shape is barely visible. The cell second closest to it has a relatively clear shape, but no detail. No organelles are visible, and precise bends and wrinkles are invisible.
The cell directly touching the player is almost completely visible, only having a bit of blur on some of the organelles.

I might make concepts for more advanced cell senses later, but macroscopic concepts will have to wait for when the stage is properly playable.

I believe that a lack of color should be reserved specifically for when the player can actually see, because being in a void without color would be tiring to look at. After all, the main reason I decided to make this concept is because having a plain old black border would be quite ugly, and a gray abyss is only a little bit less ugly.
I also think if you made it grayscale, it would end up just seeming like poor vision. Whereas the bright, alien colors make it more clear this isn’t actually sight, but a visualization of compounds in the area- including the ones that organisms are made of.

But once you do develop sight, just seeing the shapes around you would be enough to make the game visually interesting until you develop the ability to see color. That, and developing color sight would honestly be pretty easy. Just a few cones and you’re good. Plus, compounds would still light up in the cell stage even when you do have vision, because you’re still using chemoreception to detect their location- you can just use your limited vision to make out more detail. So, the cell stage would look very appealing even in grayscale, because compounds would be an exception to the grayscale rule. Cells don’t find compounds just by seeing them, they sense them in other ways, similar to my concept of smell illuminating things for you.

In the macroscopic stage, though, you will probably want to evolve the ability to see at least a few colors to make the world look more visually interesting, but of course it’s optional and a player can choose to stay blind or see in grayscale. Macroscopic organisms have less abstract senses than microbes so I doubt there’d be any exceptions to the grayscale rule. Things are colorless unless you allow yourself to see their true colors, or choose to be blind. In which case, the world will still be visualized with bright lights, but the colors of the lights would be determined by scent. Otherwise everything will be the same color. Not gray, probably a blue like in my concept.